A contemporary model of social evolution: an ecological conception of change in the context of the political economy. Johnson and Earle (2000) 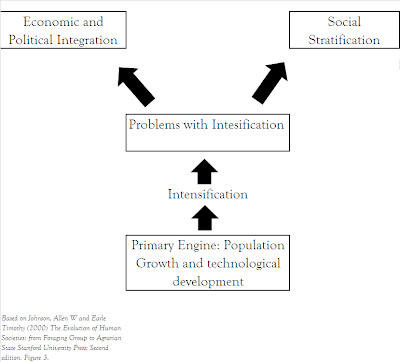 Human social arrangements run the gamut from those groups who live largely without the domestication of plants and animals, like the !Kung of the Kalihari Desert, to the global societies of today, heirs, for better or worse, to the consequences of the agricultural, urban and industrial revolutions.  In a previous post I outline an approach developed by Julian Steward to explaining factors driving social evolution and producing this variety of social arrangements.  Julian Steward’s approach to social evolution had the virtue, according to Johnson and Earle, of providing a bridge between social evolutionism and economic anthropology.[i]  The intention of Johnson and Earle's approach is to reconcile “the structural Marxist emphasis of power and the control of resources into a larger, more ecological conception of the political economy as a set of solutions to problems arising in the subsistence economy.”[ii]  Of course contradictions emerge for people between satisfying ecological needs and contribution to political economies.  From an evolutionary perspective social change occurs, say Johnson and Earle, if the benefits to individuals or families participating in new arrangements exceed the cost of participating (assuming, one must suppose, the absence of extreme forms of coercion).  As population density increases, cooperation and group action is inevitability required to solve problems associated with that increase.  Those groups that form “outliers” from the centre of power are those that are outside the “benefit structure” of the political economy.

The model of the social evolutionary change that Johnson and Earle provide is therefore part ecological, part social economic.  As population grows and technology develops (a reciprocal process) social and ecological factors intensify.  Intensification creates problems, for instance, a larger population requires more resources; if these problems are not addressed this can result in a decline in the population.  Solutions, other than a collapse, typically come in the form of changes (often innovations) in the political economy.  As new structures that typically bring greater economic coordination and consolidation of the powers of leaders take effect, the process of intensification continues and this in turn eventually calls for a new set of solutions.  They model this as an iterative process – an upward spiral of social evolution.

The intensification that occurs as a result of population increases and technological development produces, as I stated, a variety of problems.  Johnson and Earle group these into four categories: productions risks, problems associated with raiding and warfare, issues of poor resource use, and resource deficiencies.  For example, as populations increase the implication of a poor harvest become magnified.  Typically it makes best sense for the community to share the burden of dealing with production risks by means of food storage, or developing reciprocal agreements with neighbors.  Though cooperative reciprocation occurs generally as the resources become stressed, competition between neighbors is also a likely outcome.  Thus intensification can make war a option whose benefits can outweigh the risks.  Raiding and defense both call for greater social integration.

With intensification comes the need to develop resources that were not economically advantageous to go after before.  Oftentimes this requires investment in technologies that previously were not considered worth investing in.  Once again solutions to this problem typically come from greater political integration and control.   Finally, resource deficiency in one geographically area can be satisfied by trade with areas that can supply them.  Trade of goods and technology can result in greater efficiency though it requires a degree of social control so that trading deals can be negotiated and honored.

Solving problems associated with intensification results in the integration of groups –political complexity spirals up “to the development of the nation state.” On the one hand the outcome of intensification (of population and technology development) results, as Johnson and Earle see it, in the integration of economic and political matters, and on the other hand to greater social stratification to control the implementation of solutions.

The model which has been quite simply stated above is used by Johnson and Earle as a guide to the nineteen case studies that they have presented.   Not all of the case studies conform to the simple patterns they develop in the model but the model does provide cohesion to a roster of case studies that differ in their ecological contexts and political complexity.