Dedicated to the students who travel with Randall Honold and me to Wicklow, West Kerry, and Connemara, this summer, following in the footsteps of Synge.

At that time in my life before I realized that such things are rare, I was paid, modestly it’s true, by Glenveagh National Park to travel on foot through parts of northern Donegal to collect and name insects. It is rare to have time on one’s hands, rare to love so fully what one does, and rare to have so little conception of what the future holds. I was, however, a little lonely. Each morning I walked transects across the lonely bog to net flies. In the evenings I had all to myself the park’s administration building which housed a research facility where I would gently boil the preserved flies in beakers of sodium hydroxide and mount their translucent parts in euparol, an aromatic embedding medium, on glass slides. At the other side of the building was the bunk room where I slept. I only rarely talked to another soul.

Seeking company was, therefore, one of my reasons for taking afternoon bicycle rides through the mountainy countryside surrounding the park and when I could I’d chat greedily with farmers standing at the edges of their fields. The occasional walker would also stop and turn on hearing my bicycle approach and would say a word or two to me about the weather. It was oftentimes quite warm on those summer afternoons though, not infrequently, an immeasurable bank of gauzy cloud would roll in from the north Atlantic and obscure the sun. At that time I conjectured that the fine-grained nature of the Irish countryside, the fact that one could see every speck at a distance, every flower popping out from among grassy bog, was because of the immense amount of moisture in the air. Everything in Ireland is viewed through a million wet lenses. I talked one late afternoon in July of 1987 with a farmer who had stopped from his labor to drink cold tea from a little glass bottle. More often than not though the little back roads in Donegal were deserted.

One afternoon I rode an ambitious route which brought me closer to the sea. Many years later I drove those roads with my father, and he and an aging fisherman from Bunbeg assessed my father’s Irish, the latter by glances of incomprehension, as they both looked out on the waves. As I rode my bicycle through one of those small villages back in 1987 a dog who took especial umbrage at me on my bicycle worried me quite persistently. I sped up as best I could with him nipping viciously at my heels. The dog knew the terrain better than I, of course, and as we passed by a house close to the edge of the village he ran up on an embankment at end of the garden. Within a moment of two he was running level with my head. I assumed he was about to take a flying leap at me but he left off the chase, the knowledge of his victory being, it would seem, enough to satisfy him.

Later that afternoon I puffed my way up an especially steep boreen. The afternoon was hot and the birds were quiet in the recesses of the hedges. The road eventually defeated me and I dismounted and pushed my bike up the hill. I walked by a little house at the garden gate of which a woman stood and looking out upon the road. I hello-ed her and she mutely greeted me. I continued on my way. As I made my way to the summit of the little hill I felt a thud on my shoulder and then heard a series of sharp clacks upon the tarmac road. Someone was throwing stones at me. Looking back I saw a small besuited man who had appeared at the door of the house. He bent down to pick up another handful of pebbles and loosed them in my direction. The woman-of-the-house maintained her stance, though now looked in my direction. After my first yelp, none of us uttered a thing. I worked my way up the hill, as one does in a nightmare where one laboriously runs to slow avail. Stones, close by, rained down. On gaining the top of the hill I jumped back on the bicycle and sped off downhill and away from my assailant. Later that day I made my way back to the park by another route and was unmolested by neither man nor dog.

A Microcosm System for Looking at Decomposition of Horseshit

This work is being done to provide data towards the creation of the BioShaft, a project under development with designer Domenico D'Alessandro.  The BioShaft is a soils-based treatment system for the decomposition of human fecal waste.  The decomposition products will fertilize a green wall and other urban vegetated systems.  Our initial work at DePaul uses horse manure as a surrogate for human waste and is designed to examine to rate of decomposition and the efficacy of leachates as fertilizer.

For more on the BioShaft design see here

We set up the first of our experimental systems today:

Our horse manure.  Each student used approx 30 g of manure.

The manure is place into a microcosm (we are using a Nalgene filtration unit). 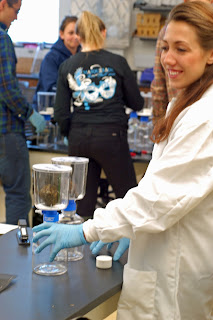 A piece of manure is surrounded by one of three treatments: garden soil, mulch or perlite.  To these will be added a microbial treatment to accelerate microbial decomposition. 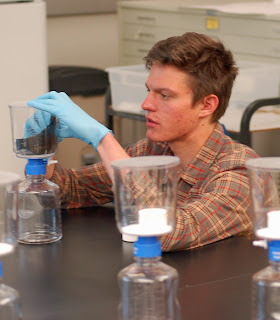 Each unit has approx 800 ml of substrate that surrounds the unit. 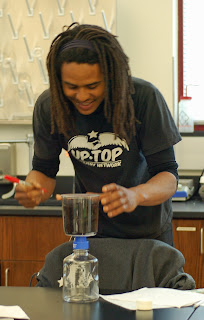 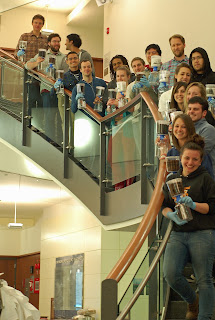 Posted by DublinSoil at 9:28 PM No comments:

The definition of "architecture" I am using here is from Halle, Oldman, and Tomlinson's classic Tropical Trees and Forests: An architectural analysis (1978) see here.  Architecture is "the visible, morphological, expression of the genetic blueprint of organic growth and development."

A good place to start getting you eye trained to look at the architectural patterns of trees is the Lincoln Park Conservatory!

Notice below the way in which space is densely filled in the conservatory. This emerges for a variety of reasons, one of which is that there is a greater number of architectural models expressed in tropical vegetation.  This allows for a greater occupation of space for tropical vegetation. 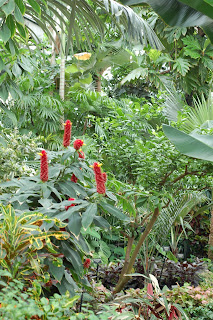 Tropical forest hosts many palms which are characterized by their single trunk often with a single apical meristem.  Rare to find these in the temperate zone. 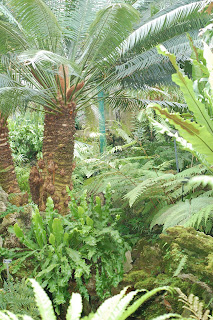 Contrast these conservatory pictures with tree vegetation in the park outside.  Architecturally there are fewer models represented.  As far as I can tell there has not been much done work done to assess the diversity of these forms in the urban environment. 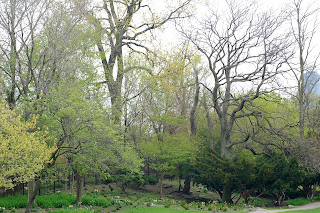 Oz Park, where there is an attempt made to add a nice understory to the urban forest. 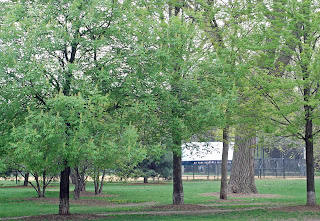 The model analysis can be applied to vegetation other than trees.  Here is a liverwort with some nice branching patterns. 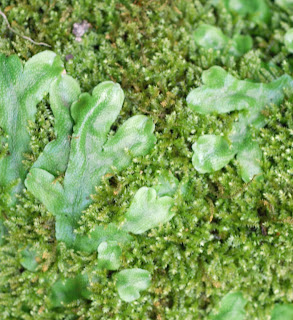 Posted by DublinSoil at 3:25 PM No comments:

Jack Kerouac's Pile of Shit, or St Jack in the Wilderness

Sixty-three days after his solitary stay on Desolation Peak, Jack Kerouac came down the mountain leaving behind him a “column of feces about the height and size of a baby.”  Though Kerouac may not be everyman – at times he’s jubilant, at times morose, verbose, braggardly, brilliant, invariably drunk, incessantly dissecting, sullen, always writing, experimenting, vagabonding, observing minutely, oedipally strange, holy, obnoxious, and not infrequently full of shit – nonetheless, Jack’s ordinary failure in the wilderness is perhaps a more honest reckoning on the meaning of wilderness for us everyfolk than all the successful accounts written by the hard men of the great American Wilderness tradition.

In the summer of 1956, at the suggestion of beat-poet and Zen Buddhist Gary Snyder, Jack Kerouac worked as a fire lookout on Desolation Peak in Washington State’s North Cascades.  It’s a story he tells inDesolation Angels, a “chapter” of The Duluoz Legend, his sequence of thinly veiled autobiographical novels.  Jack went to the mountain with big ambitions.  Coming out of the wilderness a couple of months later he left behind that great mound of shit, and the carcass of a murdered mouse, Kerouac’s first kill (“it looked at me with ‘human’ fearful eyes”[1]).  But what had Kerouac taken away with him; taken down from the solitude to the cites and to his now famously garrulous writer friends?  That is, what was the value of Jack’s time in the wilderness, to him or to us?

Read on at 3quarksdaily
Posted by DublinSoil at 12:28 PM No comments:

The Uses and Disadvantages of History for Restoration

Thoughts comments before I submit this abstract...

A central tenet of ecology is that each species has a unique niche.  Although we do not, of course, know precisely the number of species on earth – perhaps not even to the nearest order of magnitude – nevertheless, niche theory suggests that we have millions of species plying their independent ecological trades in local environments.  From the perspective of the “equilibrium paradigm” in ecology local assemblages are assumed to be regulated primarily by competition among organisms, and therefore a tight relationship between species composition and ecosystems processes might be expected to exist.  Under these assumptions restoration strategies that protect ecosystems processes and services will map quite nicely onto a more traditional focus of protecting species.  However, over the last generation of ecological thought the role of non-equilibrium forces, disturbance and so forth, are now appreciated as contributing to the structure of local assemblages. Species may be redundant with respect to their contributions to important ecosystems processes; therefore one might predict the recovery of these processes in degraded systems without a concomitant recovery in species.   Thus, although the structure and function of ecosystems are inextricably linked they are not necessarily tightly linked and consequently we can define two target poles for restoration.  Prioritize the saving all the pieces, oftentimes using the historical systems as a guide, or saving the function of systems, which may result in novel ecosystem.  I will discuss these tradeoffs from a variety of perspectives.  In my remarks I will draw upon the work of German philologist Friedrich Wilhelm Nietzsche whose metric for evaluating the utility for history was the degree to which our historical sensibilities served the needs of “a mighty new current of life.”

Posted by DublinSoil at 9:47 AM No comments: 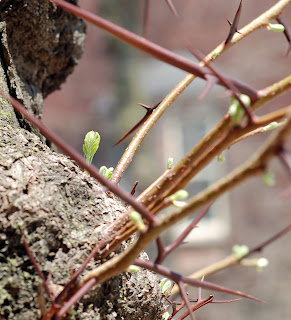 Honey Locust getting ready... not quite there yet. 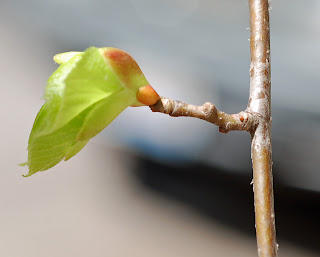 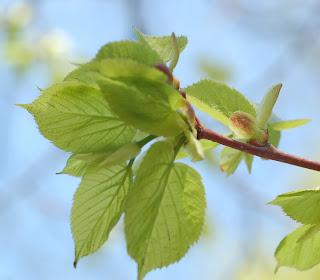 Some Linden leaves have thrown caution to the wind and are out! 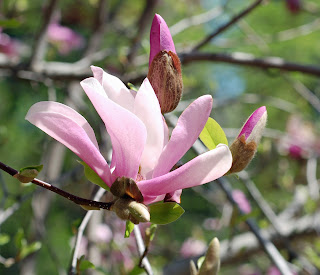 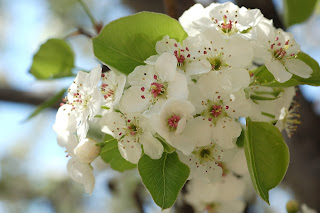 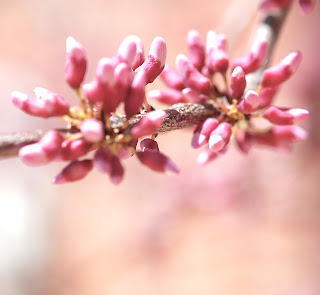 Redbud clustering about the twig like pink soldier ready to deploy. 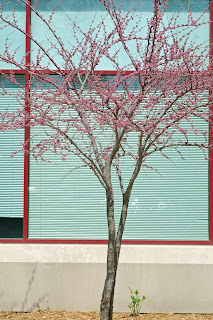 Redbud... flowers, as always, getting the jump on the leaves. 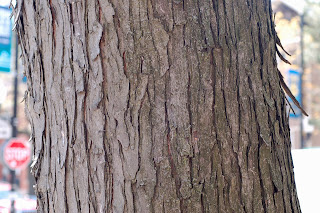 ...slightly exhausted from the effort 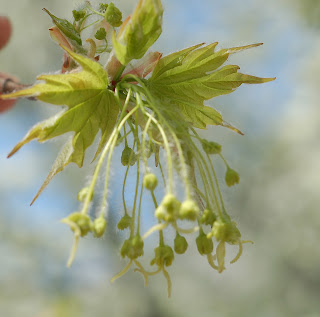 Posted by DublinSoil at 2:05 PM No comments: