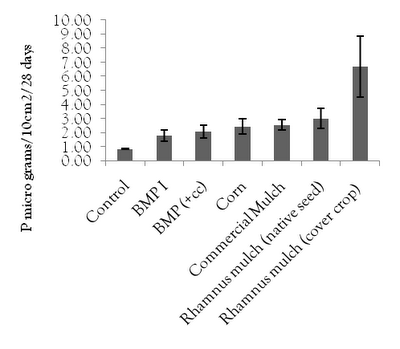 This graph shows the soil phosphorus levels during the first year after an invasive shrub, European or Common buckthorn (Rhamnus cathartica), was cut and removed from our experimental site (controls are uncut buckthorn).  Each bar represents 5 separate plots per treatment.
In this experiment, conducted in collaboration with Lauren Umek and other colleagues at DePaul university, we removed the invasive species and then implemented a variety of treatments:
Best Management Practice (BMP 1) is to cut and then seed with natives;
BMP + cc, is cutting of invasive follower by planting of a cover-crop of grasses;
Corn is removal followed by growing a rotation of corn;
The commercial mulch treatment is incorporated into the soil and native seed is planted;
A mulch is prepared out of the wood from Rhamnus and incorporated into soul for the final two treatments (with cover crop, or with native seed).
The idea that we are playing with here is that a manipulation of the soil - wood mulches are especially important in this regard - reduces that availability of key soil nutrients, nitrogen in particular, which in turn reduce the rates of reinvasion by invasive species, and create an environment favorable to species of conservation interest.  Mulches may reduce availability of some nutrients because the microbes that decompose the wood "mop up" any extra nutrients making them less available to plants.

The results of an analysis of soil nutrients (sampled with a probe buried for approximately a month in Spring of 2008) revealed that mulched treatments generally had more phosphorus available in the soil.  The uncut control plots had the least phosphorus.  Contrary to our expectation nitrogen is not altered by any of our treatments.

I'll show, in later graph-posts whether this corresponds to changes in the vegetation (spoiler - there are interesting patterns in the reinvasion of the plots after invasive species removal and treatment).
Posted by DublinSoil at 2:48 PM