'I would like my books to be a kind of tool-box which others can rummage through to find a tool which they can use however they wish in their own area... I would like the little volume that I want to write on disciplinary systems to be useful to an educator, a warden, a magistrate, a conscientious objector. I don't write for an audience, I write for users, not readers.'  Michel Foucault, (1974) 'Prisons et asiles dans le mécanisme du pouvoir' in Dits et Ecrits, vol. II. Paris: Gallimard, 1994, pp. 523-4.[ii]

What kind of tool-box? 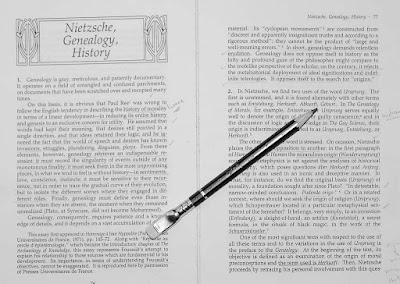 Foucault’s text Nietzsche, Genealogy, History is on the threshold.  Methodologically it supposedly inaugurated a new approach for Michel Foucault the one-time archeologist[iii]: before this lies Madness and Civilization: A History of Insanity in the Age of Reason (1961), The Birth of the Clinic: An Archeology of Medicinal Perception (1963), The Order of Things: An Archeology of the Human Sciences (1966), after this Discipline and Punish: The Birth of the Prison (1975) and The History of Sexuality Vols 1-3 (1976-84)[iv].  I stand on the threshold also, with little other than this one methodological text to illuminate a path forward and backwards through the work of Foucault.   That is, though I have spent a reasonable amount of time with several of these volumes, I am a Foucauldian beginner.  But why not initiate an encounter with a writer by way of his methodology?[v]  If Foucault intended his work for users rather than readers, an evaluation of his methods allows us to determine the degree to which we might want to use his scholarly tools.  Indeed if this methodology engendered for Foucault a productive renewal of his work, it is worth enquiring about the resources that genealogy provides him that his archeology could not.  One might also enquire if the ontogeny of the methodology described in Nietzsche, Genealogy, History has its “origin” explicitly in Nietzsche.  At the risk of being too clever, we might however perhaps we might launch this query about Foucault’s methodological “origins” using the very tools made available to us by Foucault.  Ultimately what are Foucault’s debts to Nietzsche?  And what debts should we as latter-day genealogists have to Foucault?