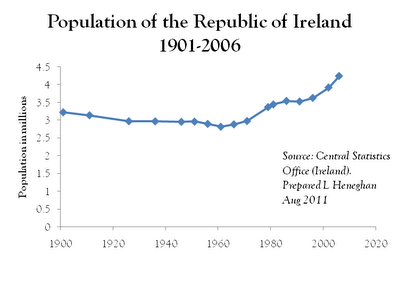 These data from the Irish Central Statistics Office (where I worked briefly as a Clerical Assistant in the mid-80s) reveal the well known decline of the Irish population from the early years of the 20th C till the mid-sixties.  In fact, the year of my birth seems to coincide with a revival of Ireland's population.  I suppose I should not read to much into this.

In recent years population growth rate has been brisk - >2% per annum . The high rate derives from high birthrates (driven by a large youthful population, and until very recently high immigration.  The fertility rate is quite low at less that 2 kids per woman.

Posted by DublinSoil at 2:08 PM