Robinson Jeffers' Inhumanism: The Ecological Thought or The Misanthropic Rebuke? 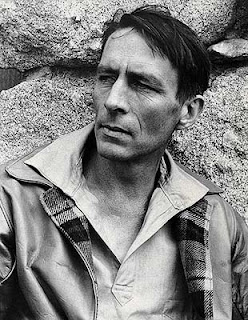 I have been rereading poems by Pittsburgh born Robinson Jeffers (1887 – 1962) with my seminar class recently.  Jeffers has had a perennial appeal for environmentally-inclined readers, with his wilderness inflected meditations on his adopted home on the California coast.  The poems that I know (I am a Jeffers amateur) are sturdy rather than pretty, and charged with solid thought rather than airy abstractions.  Though there has been some discussion among the critics about his influences (was Schopenhauer as important to him as Nietzsche?) what strikes me are the thematic resonances with on the one hand American environmental writers both before and after him and, on the other, with themes from the Upanishads (which I am reading with another class).

The influence of the Upanishads, philosophical texts in the Hindu tradition, on Emerson and Thoreau is pretty well known.  The Upanishads were also famously a source for Schopenhauer (and Schopenhauer, of course, exerted a substantial influence on Nietzsche). Finally, these texts also influenced W B Yeats, whom Jeffers admired (see this post).  The Upanishads rest at the intersection therefore of many of Jeffers’ more important inspirations.  From this influence Jeffers can create striking things.  In The Answer (1935), for example, he writes:

“A severed hand/ is an ugly thing, and a man dissevered from the earth and the stars and his history…for contemplation or in fact… /Often appears atrociously ugly.  Integrity is wholeness, the greatest beauty is/ Organic wholeness, the wholeness of life and things, the divine beauty of the universe.

The lines strike me as ferociously lovely – they bring together the core insight from the Upanishads of unity (of Brahman/Atman/Self etc), and the ecological thought of interconnectedness (nicely discussed by Tim Morton in TheEcological Thought) in a way that seems nutrified by the spiritual vitamins of the former and the material network implied by the latter (or perhaps vice-versa, that is, the materiality of the Upanishads and spiritual nutriment from ecology).  In its contemplation of integrity, Jeffers’ thought is squarely an ecological one with a long pedigree and it anticipates Leopold’s proclamation in his essay The Land Ethic (1949) “A thing is right when it tends to preserve the integrity, stability, and beauty of the biotic community. It is wrong when it tends otherwise.”

Jeffers’ writing shares with the writings of the early environment movement a dyspepsia about human interference with the wild.  For instance, in writing about Carmel, his California home, he laments the domestic development of the region though he was consoled by the “extraordinary patience of things” (Carmel Point, 1963).  In that poem he also gave a succinct statement of his basic philosophical position.  He wrote:

“As for us: We must uncenter our minds from ourselves;/We must unhumanize our views a little, and become confident/ As the rock and ocean that we are made from.

In fact he gives to his philosophical position the somewhat obvious name "inhumanism," which is aimed at allowing us shift our emphasis from humankind to that which was not humankind.  In The Double Axe (1948) he declared that “[Inhumanism] offers a reasonable detachment as rule of conduct, instead of love, hate and envy. It neutralizes fanaticism and wild hopes; but it provides magnificence for the religious instinct, and satisfies our need to admire greatness and rejoice in beauty.”

Two things strike me here: the expression of inhumanism in Jeffers verse can sound…. well, inhumane, and makes him less appealing to some tastes, and secondly there may be some nice resonances between Jeffers verse (including the longer epic pieces) and the type of decentering that appears to be possible through the recent work in object oriented philosophy (See a post here from our own Christine Skolnik here, and some responses here on Levi Bryant’s blog).

His poem Hurt Hawk (in his Collected Poetry of Robinson Jeffers, edited by Tim Hunt.  Copyright © 1938) illustrates both points.  The poem contains the famously controversial lines:  “I'd sooner, except the penalties, kill a man than a hawk”.  But it also describes the hawk, after a mercy killing at Jeffers hand thus:

“What fell was relaxed,/Owl-downy, soft feminine feathers; but what/Soared: the fierce rush: the night-herons by the flooded river cried fear at its rising/Before it was quite unsheathed from reality.”

It may be hard to read Jeffers without feeling a tedious wilt of shame as that poet wags a talon at us, and yet it also invites us think about the possibility of being human in a fuller and yet at the same time a strangely realistic way.