ENV at DePaul is turning 30 this year. We are hosting a reunion dinner with Guest of Honor: Dr Tom Murphy, Director Emeritus on 3rd June 2016 from 5-7 pm!

We've made a real effort to contact alums from the past 30 years, but there is still time to respond. If you are an alum and want to join us email me at lhenegha[at] depaul.edu

The dinner will coincide with our annual student symposium on June 3rd from 3-5 pm. All event are in McGowan South, 1110 W Belden, Chicago!

We will be making a quilt to commemorate our 30th anniversary.  Leaves for the quilt will be available on the night!

I would love to see you all at this event!  If you are still in contact with your old ENV pals, please make sure they know about this event.  It will be a blast.”

Posted by DublinSoil at 5:00 PM No comments: 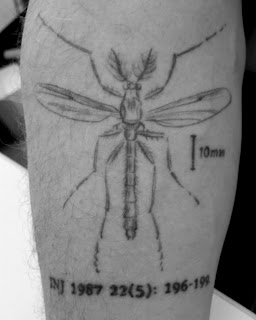 For a couple of years in the 1980s I worked in several of the Irish National Parks collecting insects. Month after month I tramped around these landscapes—they are humanized areas, and yet remain relatively undeveloped and wild.  This work inspired my first research paper, Additions to the Inventory of Irish Chironomidae (Diptera) with Declan A. Murray. By the by, the insects of these parks also inspired my first tattoo, though this was quite a while later.

At that time I regarded the Irish language with mild disdain. My father at one point when we were still quite young proposed that we speak as Gaeilge at home. With him we did not agree (an dtuigeann tú?) Besides I was a middling scholar in my youth and never got the hang of the language. I had more interest in Irish music, but my tastes inclined more towards artists like Christy Moore, Scullion, Paul Brady and so on. I knew very little about traditional music.

In recent years I have developed a feverish interest in Irish music—my spare time is devoted to the tin whistle. I also have a taste for the language although admittedly I have little time to devote to it. 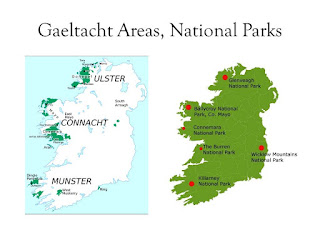 All this is a preamble to saying that recently I’ve  been preoccupied by these three interests: the traditional landscape, traditional language, and traditional music. Here’s the thing: the overlap in these three arenas appears not only to be a mental phenomenon, there is also a geographic overlap: these days where you find one you find the others. The music, language and landscapes flourish together. The map here shows national parks and Gealtacht areas (regions in Ireland where the language is still spoken in daily life). I don’t have a convenient map of the areas for excellence in traditional music; indeed music is the most mobile and diffusely spread-out of the three, but several areas of Co Clare, Connemara in Co Galway, Co Donegal, Co Kerry, Co Cork that are adjacent to the parks or at least to wilder landscapes are epicenters for traditional music.

I’ve been turning over this concordance in my mind in recent weeks speculating about this (literal) co-incidence. More than just a spatial concordance though, I’m hypothesizing that these are mutually reinforcing aspects of the land and culture. The land influences the language (no surprises here but Irish is very rich in terms for aspects of nature), and perhaps the music. In turn the language and music, can influence that way in which people regard the landscapes in which they live and work.  I’ll formulate this a little more precisely in the coming weeks. I call this the Traditional Nexus Hypothesis -  (TradNex for short!)  All this is, perhaps a commonplace conjecture. I recall similar themes emerge in Barry Lopez’ work. The part that interests me most, though, and something that I’ve not heard much on it how the sounds of the landscape influence language and music especially. Last year I started doing some recordings of the landscape and of traditional music to probe the links.  Stay tuned as they say.  Or, fanacht tiúnta, as they say.
Posted by DublinSoil at 10:37 AM 2 comments: