Nature heals. That two word sentence, combining as it does one of the English language’s most complex words with one of its most soothing, unites an antique intuition and an emerging science, draws upon a body of thought distilled by the Romantics and which remains compelling to contemporary environmental thinkers, is nowhere better explicated than in two classic children’s stories: Heidi by Johanna Spyri (1827 - 1901), and The Secret Garden by Frances Hodgson Burnett (1849 –1924). Is it coincidental that they are both female writers? I suspect not.
Posted by DublinSoil at 7:27 PM 1 comment:

A Montrose Morning: birds and the planes overhead

If you rise early on spring morning and join the hushed throng of birders at Montrose Harbor you will hear a loud chorusing of migratory and native birds.  It is greatest free event Chicago has to offer. The birds are mostly invisible within the shrubby shelter of the Magic Hedge whose sole magic is the unexpectedly high density of birds who stop off there after long voyages.

Close your eyes; soak it all in. The birds call each to each, and the wind rustles the leaves of the Magic Hedge and out across the grasses of the sanctuary’s minuscule savanna.  If it rains, listen to drops as they fall on thousands of leafy umbrellas and softly percuss upon the soil.  As your ears attune, and the orbit of your attention radiates, you hear wave after wave roll in and softly break upon the adjacent lake shore.  Do they not lend to your reverie a mesmerizing rhythm? Can you believe that you are in the city? The world is all birdsong, and you are all ears.  Is this why not you were given ears: to immerse yourself for these seconds in the company of birds and hedge and grass and waves and raindrops?

A murmur swells, and now there is a slight shuffling of feet, pencils scratch on paper, and then a riot of clicks and camera whirs. “Did you see it, did you see it?”, they whisper. The birders have spotted a rarity. Is it a Kirtland's Warbler? A dozen fingers gesture, but for the life of you, you still can’t see the feathery cause of their excitement.

You close your eyes again, but the spell has been broken. Now instead of the gentle beat of waves on the shore, you hear the hum of traffic on Lake Shore Drive, a pretty but noisy expressway that runs parallel to the lake, no more than half a mile away. Above you an aircraft growls in low over the water preparing to land in O’Hare to the west. And then yet another comes in. Now that’s your attention has been drawn to it the morning chorusing of aircraft is no less busy, though certainly less beautiful, than that of the birds. Your pastoral dream has been broken; yes, yes, you are in the city.
Posted by DublinSoil at 10:55 AM No comments: 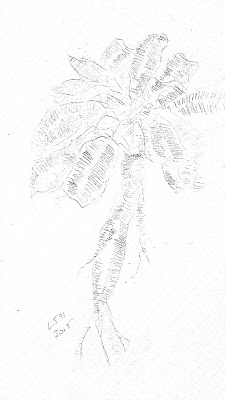 Bagpipes in Hell: Hieronymus Bosch’s The Garden of Earthly Delights

More ink has been spilled interpreting Hieronymus Bosch’s masterpiece, The Garden of Earthly Delights, than the oil applied to the panels on which it is painted. The triptych with dates to the early 1500s now hangs in the Prado, Madrid.

The left panels depicts a youthful God, presumably Christ, presenting Eve to a dazed Adam. Around the first couple cavort an assortment of animals, some recognizable, and some surreal. The panel to the right depicts Hell. A man is eaten by a seated bird-headed creature. His head is in the beast’s mouth, birds fly out of his posterior.  Around him are grimly fascinating scenes of torture and vicious cruelty.  A rabbit, as innocent looking as Potter's Peter Rabbit, carries an impaled and bloodied man. At the center of the canvas a hallowed out man is supported by rotting tree-trunk. Balanced on this head is a disk bearing a set of bagpipes.  Yes, there will be bagpipes in hell.

Sandwiched between Paradise and Hell is the scene which gives the painting its modern name, the Garden of Earthly Delights. The panel depicts hundreds of carnally engaged couples, enormous birds, flying fish, and an abundance of strange vegetation. A theme of excess dominates: excessive sex, excessive pleasure, and excess fructification. In the center of this panel, which is therefore at the very center of the entire work, a blue orb emerges from the middle of a lake.  Through a window in the globe a man can be seen cupping his partner’s genitals. A rotund bottom shares the scene. Is this an earthy paradise, is it the world as it should be, or, rather, does it depict a way-station in our decline from paradise to hell.  Perhaps, in the end, we shall all be consumed by the bird-demon, with birds flying out our asses.

Posted by DublinSoil at 11:24 AM No comments:

Gardens are curious affairs. We speak of growing vegetables, but, in fact, vegetables grow themselves. Indeed, it is the vegetables that grow us. Gardens are, to write philosophically, a strange amalgam of control and spontaneity.  A wild garden, maintained for aesthetic reasons, requires limited control.  Spontaneity there is tolerated.  A productive food garden, in contrast, requires a surfeit of control. The task of the vegetable grower is to foster the conditions under which the edibles will grow.  And this, as often as not, requires the killing of creatures.
Posted by DublinSoil at 11:17 AM 2 comments:

I’m interested in the decomposition dynamics of compost piles. In the coming weeks I’d like to do some preliminary studies on decay rates and nutrient processes of compost piles. Especially of interest to me are those compost heaps where their keepers have reasonable knowledge of inputs (even a reasonable description will qualify).  Vermi-composting is especially welcome.  Chicago region is preferred but we can work out something if you are farther afield.  Contact me at lhenegha [at] gmail.

Posted by DublinSoil at 2:47 PM No comments:

The Pastoral, literary and environmental, defined.

The pastoral as a literary form and a strand in environmental thought is so polymorphic, that it can seem to capture everything. But something that is everything can seem to be nothing at all.  This is not a problem unique to the term “pastoral”.  The term “environment”, for example, which can be extended to include everything surrounding an organism, and at a pinch can also refer to an “internal environment”, runs the same risk unless it is quite precisely operationalized. To do so scientists identify those ecological factors most relevant in determining the functioning of an individual organism.

So how may the pastoral be operationalized?

The pastoral flags an occupation: shepherds and tenders of flocking animals and other peaceful creatures, a place: primarily rural or gently humanized landscapes, at times gardens and other oases of green; a mood: nostalgic, a sense of belonging, of being at home, a tone: harmony and balance, a spirituality: that oceanic feeling of connection with nature, a technological orientation: modest and appropriate, and offers these human gifts: well-being, redemption, forgiveness and recovery.
Posted by DublinSoil at 1:05 PM No comments: