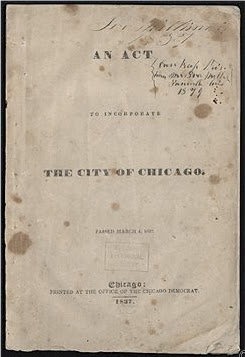 On August 19th 1833 Colonel Colbee Chamberlain Benton (1805-1880) left Chicago with Louis Ouilmette, a young man of French and Potawatomi heritage, to inform local Indian tribes that their federal annuities would be paid in September of that year.[1]  Benton’s trip, recorded in “A visitor to Chicago in the Indian Days: Journal of the Far-Off West”, was taken one year after the end of the Black Hawk war which ended most tribal resistance to white settlement of the Chicago area.[2]  That same year the Potawatomis, a tribe that dominated in the lands that became Chicago since the 1690s, relinquished their rights to their lands in Illinois.  At that time the white settler population was little more than 150 people.  A few years later in 1837 Chicago was chartered as a city.

That Benton’s journey was undertaken at time of tension between the indigenous and settler population is reflected in his descriptions of their trip.  On the night of August 24th the pair of travelers passed through some oak groves and arrived at a small stream in a little prairie in Southeast Wisconsin and they camped there for the night.  As night fell they heard Indians around their camp.  Benton hid beside a large tree and at Ouilmette’s suggestion he removed his straw hat since it was “a good mark to shoot at.”  Assessing the danger they found themselves in, Louis remarked that “there were occasionally some of the Sauks and Fox Indians wandering about in [that] part of the country, and from them [they] could not expect much mercy.”

Benton didn’t sleep that night.  However, even if they had been “in danger of suffering from the power of their tomahawk and scalping knives” it was not fear that kept him awake.  He remarked, in fact, there was something about their circumstances “so novel and romantic about it that it dispelled every fear…” He was far from home, everything looked “wild and terrible”, he was surrounded by “savages” and yet it all seemed “lovely and romantic and beautiful”.  He felt happy.

So what kept Benton from his sleep?  It was the noise!  Some of the noise certainly may have emanated from the Indians who “mocked almost every wild animal.”  But also there were unfamiliar birds calling, as well as foxes and raccoons.  In the distance, wolves howled and owls hooted in concert with the wolves.  The mosquitoes added their part to “the music”.  A sleepless, noisy, vaguely threatening night, and yet Benton declared that never before had he “passed a night so interestingly, and so pleasantly…”

So here was Chicago on the eve of its 1837 charter.  A settler population numbered in the hundreds surrounded by a loud chorusing of people and wildlife.  Benton recorded the diversity of the vegetated landscape of northeast Illinois and southeast Wisconsin as they passed by on horseback.  Near Round Lake (Lake Country, Illinois) he noted that they ventured through little oak openings then out onto the prairie, alongside little streams with “heavy timber”, and, very muddily, across “tremendous marshes”.  The prairie grass were, as they often are in these early descriptions, so tall and wet that passing through on horseback was like “wading through water.”  They shot, usually unsuccessfully at any birds they could see: wild geese, ducks, loons, pigeons, a sand crane (successfully bagged), and a prairie hen (killed and roasted for the dog). Streams were home to “some monstrous pickerel and other large fishes.”  Dotted infrequently through this wilderness were the corn fields of Indians.  Thus it was a variegated landscape supporting a rich diversity of life, human and non-human.  A gloriously loud landscape it was then, one interesting and uncanny enough to keep a man awake and happy.

On the evening of Chicago’s birth Benton even found a moment for erotic thoughts.  The travelers stopped at a village where Louis was known to the chief.  Benton remarked him as “a tall good looking Indian about forty five years of age, and is a notable drunkard”.  There Benton spots a “very pretty squaw” who roasted some corn for them.  The next morning Benton reported himself to be a little grumpy not to have dreamt of her.  “Her tawny complexion”, he conceded, “only made her more interesting.”  When he glanced over at her he found that she was “looking serenely at the sky…”  Benton speculated that she “was some pure and sinless being whose noble spirit held converse with the angels in a brighter world, far above the mortal things of earth.”  It may be more likely, however, that she was solemnly preparing herself for departure from her home lands.  The village chief, called Warp-sa by Benton, was most likely Wapse who it is claimed sold the Potawatomi lands in Illinois and was responsible for the removal of the tribe to Kansas.

And after the removal of the Indians, the landscape of the Chicago, under the influence of the vastly expanding population, turned to homogenous shit.  But that’s another story.

Posted by DublinSoil at 4:51 PM No comments:

Being Unseen: The Commonest Animal You Have Never Seen 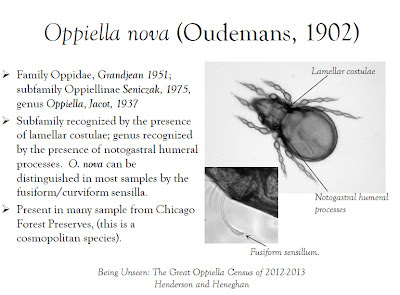 See details of this project over at City Creatures Blog.

Posted by DublinSoil at 12:32 PM No comments:

I have no recollection of putting this together - from a few months ago, but I may write an essay around it.  I am especially fond of the node "St Patrick max guler Munich Studio" 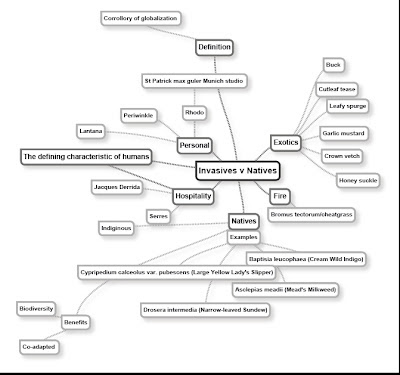 Posted by DublinSoil at 9:54 AM No comments: 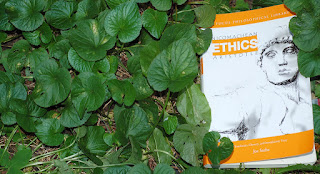 Just as tree rings can be used to age a tree, the accumulation of translations of Aristotle’sNicomachean Ethics dates the bookish man.  I, for example, have accumulated one translation for each of my five decades.  As we move along perhaps you will notice that I am not a seasoned Aristotle scholar, merely an interested student of the Ethics (my model is Joyce not Nussbaum).  When I informed my friend and DePaul University colleague Professor Will McNeill who has written extensively on Aristotle (especially in relation to Martin Heidegger’s work) that I was ruminating on a sustainability ethic based upon the Nicomachean Ethics he peered at me above his bifocals and thundered “Aristotle never used the term ‘sustainability’.”  McNeill is persnickety on such matters.   However, I am interested in this project for a few reasons, not least of which is to put my several translations to good use.  Sustainability is a newer term, but it is one that gathers up several perennial questions: how to endure in a recognizably inconstant world; how to sensibly discharge commitments to oneself and to others; how to be good.  There has been a tendency in recent presentations of sustainability solutions to resort heavily to innovations in the technical aspects of both the natural and social sciences rather than to examine how sustainability’s perennial themes have been taken up in disciplines that have examined them the longest.  We may have explored the conditions of the sustainable life for a quarter century, but philosophy has examined the good life for a couple of millennia.  Undoubtedly the humanities have secured a place in discussion of sustainability, and undoubtedly these disciplines and practices are influential, nevertheless humanists are a rarity in governmental sustainability committees, and this absence may be consequential.  Perhaps I am wrong; perhaps you’ll correct me.

The full piece is here at 3quarks.com
Posted by DublinSoil at 9:13 AM No comments: 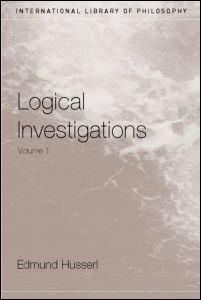 Husserl became, or course, the father of his own particular revolution; phenomenology has arguably had an analogous influence on continental philosophy as Darwin has had in biology, though, in fairness, it can be said that Darwin’s influence has been more all encompassing than has phenomenology.  There is, for instance, nothing comparable to a continental-analytic divide in biology.  There are some interesting similarities between Darwin and Husserl that are worth exploring.  I’ll mention just one point here: the foundational work of both writers was transformed quite radically by those who came after them.  In the case of Darwin the so-called Neo-Darwinian synthesis roughly speaking combined Darwin’s thinking with Mendelian genetics, closing the door on Lamarckian mechanisms.  Phenomenology presented in Logical Investigations, Husserl’s breakthrough work, was, of course, later radically transformed by Husserl himself, but transformed in turn by Heidegger and arguably by all 20th Century phenomenologists who worked seriously within this tradition.  It seems to me that both Husserl are Darwin are more likely to be read seriously by those looking at the history of a later position – a sort of archeological dig – rather than for the immediate insights they provide.
Read more »
Posted by DublinSoil at 8:52 AM No comments:

A note from my father on the name Heneghan

Dear Liam
I start by saying that tracing the origin of Irish family names is a rather dodgy business.  Statements often end up with a warning note along the lines of:  ‘It is also possible that the name originated from the name of some local person, usually the head of a break-away sept of the major clan’.


In our family the expert was Uncle Tom.  His version of the name in Irish was Tomás Ó hÉighneacháin.  He also admitted that the version Ó hÉidhneacháin could be used.  He believed that the name had reference to the Ivy plant.

This is reasonably convincing.  The English-Irish dictionaries give the translation of Ivy as Eidhneán, without the ‘síne fada’ on the E, and with ‘d’ rather than ‘g’.

My Irish-English dictionary gives the translation of the word ‘eidhneachán’  as an ivy branch, and this seems also to me to be good evidence that our name is strongly related to the ivy plant.  One can imagine the clan as going into battle with shields and standards bearing images of the ivy.

My cousin Paddy of Ballinrobe is married to a Co. Clare lady who believes that we are an Irish branch of the famous Heiniken lager family, so you can see how far-fetched some people can be to come up with that one!

I believe I know how the change to Bird by some of the family came about. Éan is the Irish for bird and some who emigrated from Irish-speaking backgrounds and mistakenly concluded from the sound of the name that ‘bird’ rather than ‘ivy’ was a good translation.   There is an avenue in south Dublin City which was originally named Ascal Ó hÉighneacháin, and for some reason this was changed to Bird Avenue.

I hope this answers your question.Dad

Posted by DublinSoil at 10:42 AM No comments: