When the fruit ripens seed scatters: Notes Towards a History of Motility

1. In The Beginning Was the Verb

In the beginning was the Verb, and the Verb was with God, and the Verb set all things in motion.  More than just any Word (Latin verbum, word) the God who is, was, and shall be a Verb commuted motion of an Absolute form to Relative Motion.  In the universe created of the Verb everything moves; absolutes have no meaning.
And some things rose and other things fell.  Those which rose remained in constant motion until impeded and of those which fell some acquired spontaneous motion.  These self-moved movers, called motile, include some cells, spores, the quadrupeds, and the bipeds.  The Philosopher studied the motile keenly, since the prime mover and all that had risen remained less accessible to knowledge.  Since the self-moved require the unmoving for motion they must themselves be, he concluded, comprised of a series of both fixed and moving parts at the seat of which is an unmoved mover – the animal soul.  In this way the motile mimic the first mover.
Living things move and they share this characteristic with every other thing; stasis, that is, there can only ever be relative stasis. Movement differs from motility in as much as the latter, in its most fully expressed form, is movement where a purpose that goads, a desire that compels, and a body that advances, converge.

Continue reading at 3quarksdaily
Posted by DublinSoil at 4:35 PM No comments:

Email ThisBlogThis!Share to TwitterShare to FacebookShare to Pinterest
Labels: motility 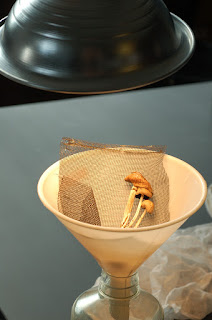 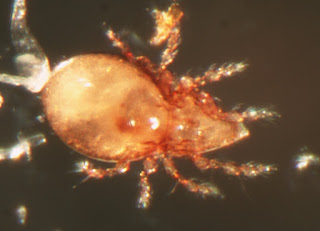 It's somewhat reassuring, I'd say, that one of the commonest animals in terrestrial environments Oppiella nova (approx 300 um - less than half a millimeter) deigns to show up in the gills of fungal fruiting bodies on Belden Avenue, Chicago near the DePaul's campus. Sample taken 14 May 2012 and extracted on makeshift Berlese funnel (above).

Posted by DublinSoil at 10:31 AM No comments: 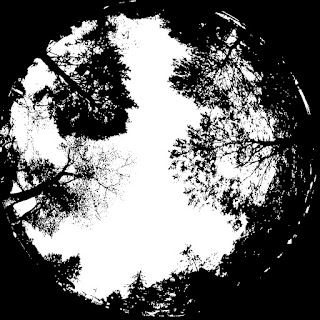 Some of my undergraduate urban ecologists and I spent the afternoon yesterday talking photographs of the tree canopy in Lincoln Park (in that section west of the Alfred Caldwell Lily pond and north of the Conservatory).  In all we processed 14 hemispherical canopy images (they overlapped to some extent) and calculated that in this section of the park the canopy is about 62% open (standard error of about 1.8%).  The canopy will provide even more shade as leaf-out continues. There are 2 fairly sizable sycamores there that have yet to emerge and they will shade the area quite nicely.

(The analysis was done with Gap Light Analyzer).

Posted by DublinSoil at 12:19 PM No comments: 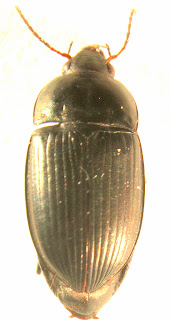 The genus Amara contains 517 species distributed throughout the  Holarctic (the Northern continents). This was collected by Jim Steffen in 2003.
Posted by DublinSoil at 12:05 PM No comments:

Back in the beetle business 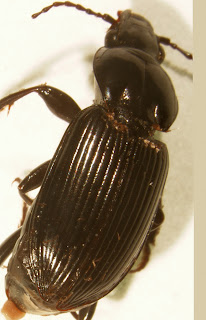 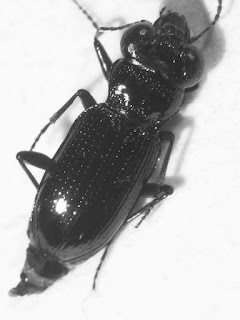 One of my long-term plans is to develop an equivalent of our 100 sites project in the city proper.  An important part of this will be start investigating similarities and differences in ecological properties and biodiversity of semi-natural woodlands and prairies with those of urban habitat (parks, gardens, urban forest and so forth).  Expect updates on this in the coming weeks.  For now a couple of pictures from a session this morning taken as I took my microscope out of mothballs.

The project will be expensive but as usual DePaul students will be guinea-pigs (or the science equivalent!).  Initially funded through the Gutgsell Foundation (thanks to Cynthia Brundage).
Posted by DublinSoil at 10:47 AM No comments:

DIFFICULT RETURNS: A thousand of miles away from Dublin, in a research station in Costa Rica, a Japanese anthropologist and I – an Irish ecologist – sat in the station's dining hall.  It was shortly after the birth of my second son who had been encumbered with the name Oisín Odysseus, reflecting the migratory Irish and Greek tendencies of his parents.  The caterwauling of howler monkey’s announced the onset of the afternoon rains, and we exchanged these folk stories.

I offered this one:
After being vanquished at the battle of Gabhra, several of the legendary warriors of the Fianna were hunting together along the shore of Lough Lena.  The company saw a beautiful woman galloping upon the waves towards them.  Niamh of the Golden Hair chooses Oisín, the bardic son of Finn, as a husband.  Oisín, enchanted, mounts the horse and she carries him back across the waves to Tir na nÓg, the Land of Perpetual Youth.  Oisín meets there with many adventures.  Alas, there is no paradise conceivable that maintains our attention eternally, so after the passage of time he expresses a desire to visit home. Seeing his sorrow and pointing out that many centuries had passed since he came, Niamh relents and lends him her horse to return to Ireland.  She instructs him that he must not dismount the horse and that he should return when he understands that what she tells him is true.  He rides off across the foamy waves. He sees for himself the truth that everything is changed – his family and his friends are long dead.  He turns the horse to return to his bride.  As he does so he notices an elderly woman struggling with a cord of wood.  Bending down from his saddle to assist her with this task he falls off the horse to the ground.  Back on native soil he ages all of those years that he has magically evaded.

My colleague shares the following:
Urashima rescues a turtle from the taunting of children.  The rescued turtle turns out to be Oto, the beautiful daughter of the God of the Sea.  He marries her and they return to the palace beneath the waves.  Time passes by and though Urashima loves his wife he dreams of his parents, and frets that they will die alone.  The princess learns of his sadness and bids him return home.  On parting she gives him a gift, wrapped in a beautiful lacquered box, though she instructs him that it is a gift better left uninspected.  If he should open it he will never be able to return to her.  Urashima returns home, and discovers that the three years spent beneath the waves were in fact three centuries, and that he has become a legend, and his people long dead.  He has no instructions on how to return to his bride, and thinking that the gift may contain these vital instructions he unwraps the gift.  A mist arises from the box and he hears the voice of his beloved receding.  Urashima aged three centuries in an instant.
Are there lessons to be learned from the stories of Oisín and Urishima?
Two island nations, one clear message: returning home after a foreign sojourn is difficult.  In both of these stories the young men are lured away by a princess – the thrall of tupping royalty must be universal.  They return – no doubt the prospect of recounting their feats abroad is integral to home’s gravitational pull.  However, nothing is as it was before.  In the case of Oisín the people are of a diminished stature compared to former times, and alas for both travelers their families are now dead.  Yes, you may leave, but do not expect home to remain unchanged. When the migrant returns it is not just he who instantaneously ages: he must witness the tumult of change in his native land telescoped into the moments of the return.   In the earliest version of the Oisín story that had been narrated to us at National School we learned that after toppling from Niamh’s magical horse Oisín withered and was turned to dust.  In this more emphatic version a return is thus precluded.

This piece of mine was on 3quarksdaily earlier this week.
Posted by DublinSoil at 12:33 PM No comments:

The Prodigal Returns: From Dwelling/Exile

THE PRODIGAL RETURNS: The week after his return the Prodigal Son remembers why it was he left.  His friends, those coarse bumpkins who so recently munched upon the sizzling flesh of a fatted calf, tell their same old jokes. They are as hopelessly myopic – as uncosmopolitan – as they were before.  They nudge and wink in a way that irritates him who has now seen more of the world. What use have they for tales of his hardship in places they have barely heard of?  They want to hear about the girls he's been with, for is it not for such exotic dalliances, such debaucheries that once he claimed he was leaving.  But that is not what he wants to talk of now – he is different in a way he cannot seem to state.  The father, all bearhugs and solicitude but days ago, is once again a sullen autocrat.  He cannot resist reminding the Prodigal that an inheritance was squandered. He queries him on his skill with swine.  And his brother, who has taken the week to cool off, now sees his own glory-days on the rise.  The Prodigal Son, whose prodigious heart-swell and homesickness had him walking home, will soon leave again.  Perhaps it is best that he does for the world has transformed and he has transformed, and he had no home to come back to.  His father and his brother have a home, but it is a different one than he used to share with them.  The Prodigal is homeless for walking away is the act of violence that annihilates the home.


This piece of mine was on 3quarksdaily earlier this week.
Posted by DublinSoil at 11:07 AM No comments:

NEVER LEAVING HOME: This happened once: a childhood friend dropped her pet hamster on a tiled floor when it was a week old.  It survived but as it matured it embarked upon its journeys in progressively enlarging circles. It would set out ambling from a center where it had been placed, and would get further (though never far) with each new expedition.  It would then list off, gimping to the left, and circumscribe a circle, as if tethered to home.  This centripetal Odysseus spent its voyaging hours within sight of a very close shore.  It died only yards from the scene of its pediatric accident.


This piece of mine was on 3quarksdaily earlier this week.
Posted by DublinSoil at 10:57 AM No comments:

Apologies that the scheduling of this has been so difficult.  Springtime is a rough time in the University calendar.

I hate to reschedule this again but there are a variety of conflicts that make it difficult to meet on Thursdays as planned .  So here’s the proposal:

We will meet Thursday May 24th from 9 till noon and discuss both books together.  In this way we hope to get a better turnout.  We meet in McGowan S 204.

To sweeten the deal INC will buy breakfast – but you must email ahead and confirm that you will attend.
No more changes, promise!
Posted by DublinSoil at 3:32 PM No comments: