The Isha Upanishad – or, Tale of Badger 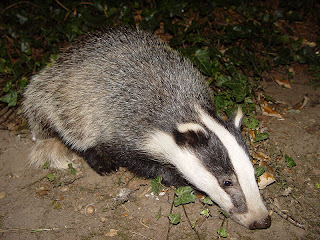 Bone on white rocks stays cool under an overcast sky.  When I picked up the skull I knew it was Badger’s because of the crest on the skull and because of the teeth.  This animal with large muscles hitched from jaw to skull can bite until it hears a bone break.  This is what I had been told and having no reason to disbelieve it I carried a stick with me when I walked alone.  If Badger bit, I would break the stick and he would let go.  Here was his skull now, strewn with many other bones on white boulders at the edge of the lake.  It was late afternoon and there was no smell but the smell of the sea, and the sea was miles away.

I progressed along the path and though I knew the evening was coming I walked out towards the mountains instead of turning for home as perhaps I should have.  For a while the lake was never far away, and neither were the trees but after a mile or so I came out from among the trees and walked along the mountain path.  On both sides of the path was bogland and I paused and looked over the vegetation and saw, not far away, a river flowing into the lake.  It had been raining so the river was full.  When I looked back I was facing Badger.  We both stopped on the path and we looked at one another; neither of us moved. For a long time we looked at each other.  I was afraid of Badger and Badger I could tell was fearful of me, so neither of us moved and neither of us looked away.  The sun was going down and the river was loud in the dusk.  Flanking Badger on the path I watched the breeze stir the plants and saw the tufts of bog cotton twitch like the heads of elderly minuet dancers spinning elliptically on a single spot.

After some time I looked away from the path to let Badger leave, so that then I could leave.  When I looked back, he remained on the path, and still he looked at me.  He said, “Come with me!” And so I dropped my stick, for I was still holding it, and I followed him, stepping out onto the bog.  We walked no further than a few hundred feet to the edge of the river and stood on a piece of raised ground.  The ground was no more than a few feet above the river.  While we stood there Badger began to push up and down upon the moist earth, raising and lowering his body, and the ground began to move, but not from the force of his body but it moved because worms surfaced around him.  And Badger ate some of the worms.  He looked over at me, but we said nothing to one another.

The ground gave way then and Badger and I fell into the river along with some quantity of the soil.  I looked up and noticed that it was now night for the sun had set, and though clouds remained in the sky, here and there stars shone in the sky and the sky was also lit by the moon.  The river carried us along, and because it was a violent flow of water, sometimes we were below the surface and sometime we floated on the top of the waters.  At times we noticed one another, but neither of us said a thing.  When I saw the sky I recognized that I was mirrored by the lights of the sky, but at times I saw Badger reflected above me.

Sometimes Badger was before me in the water, and sometimes I was washed ahead of him, though most of the time I could not tell if Badger was ahead of me or behind.  Everywhere there was the water that sustained us along our course, always ahead and always behind, always above and always below us.  When we floated we could see one another and could see our own bodies lit by the diffuse light of the moon.

Though I knew it was fear I felt, it no longer felt like fear, and though I withdrew into myself to think about this fear, I did not dwell on it for long.  Badger and I were in the water for about one hundred years, and we knew the rocks against which we were thrown and we also knew the sky.  The sun came out in the day and the moon came out some nights, and we knew the sky in these different forms, though we knew it better when the sun was less bright.  After a hundred years our bodies washed up upon white boulders at the mouth of the lake, and our bones were cool on overcast days when the sun shone from behind the clouds.

Email ThisBlogThis!Share to TwitterShare to FacebookShare to Pinterest
Labels: Upanishads