Links are to Youtube clips of music (with an occasional poem)

Martin Hayes (and Dennis Cahill).  Martin Hayes (born 13 November 1961) is a fiddler, born in Maghera (between Feakle and Tulla) in East County Clare, Ireland, and now living in West Hartford, Connecticut. He has been the All Ireland Fiddle Champion six times... (Wikipedia)

Mary Bergin was born in Shankill, County Dublin, Ireland. Her parents Joe and Máire were melodeon and fiddle players, respectively. Mary started learning to play the tin whistle at the age of nine. Bergin won the All Ireland tin whistle championship in 1970. (Wikipedia)

Padraic Colum (8 December 1881 – 11 January 1972) an Irish poet, novelist, and dramatist and folklorist. He was one of the leading figures of the Irish Literary Revival.

Horselips  are an Irish Celtic rock band that compose, arrange and perform songs based on traditional Irish jigs and reels. The group are regarded as 'founding fathers of Celtic rock. (Wikipedia)

Táim Sínte ar do Thuama  (version in Irish); I Am Stretched on Your Grave (by Scullion)

Seosamh Ó hÉanaí ( AKA Joe Éinniú; English, Joe Heaney) (15 October 1919 – 1 May 1984) was an Irish traditional (sean nós) singer from County Galway, Ireland. He spent most of his adult life abroad, living in England, Scotland and New York city, in the course of which he recorded hundreds of songs. (Wikipedia) 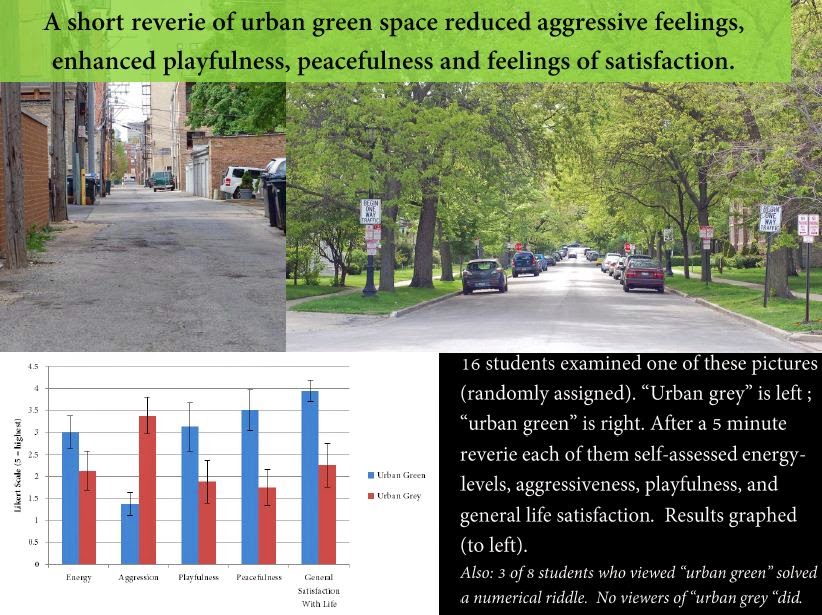 This is, of course, a study done on a modest scale.  The fuller, more comprehensive study is under-way. But results, such as the one above reports on, that I have conducted in classes at DePaul over the years have been unwavering in their direction: a reverie of a place with a profusion of vegetation always alters self-reported feelings of energy, aggression, playfulness, peacefulness, and general satisfaction with life.  Perhaps most surprisingly students dreaming of green score better on a numerical riddle!

Added: Since some of my colleagues in the environmental social sciences are emphatically pointing out the limitations of this "study" I'd like to emphatically concur that this is indeed a limited study (I'd never have made greater claims on its behalf!).  There is a small number of subjects, the students are in an urban ecology class etc.  That being said (and this is not to undercut an acknowledgment of the studies limitations) these observations were made, and these are the results.  The observations underscore the sorts of results that others have made on the implications of green space for human well-being (meant here in a very general way).  It should be used, perhaps, as a point of departure for examining these other more comprehensive studies.
Posted by DublinSoil at 3:42 PM No comments: