The Last Great Balancing Act: Eugene Odum and the Strategy of Ecosystem Development 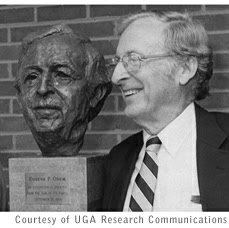 There was a small bust of Eugene (Gene) Odum in the lobby of the Institute of Ecology at the University of Georgia which bore the inscription “The whole is greater than the sum of its parts”.  It used to entertain me to see Odum, that spritely giant of ecology, pass by his own bust most days without remarking it much at all.  Lesser men might have glanced.  I showed it to my father once when he visited me in Georgia while I worked there in the 1990s.  His response after he read it was merely a shrug and he wondered whether the phrase actually meant anything.  My father was not the only one to wonder this.

In fact, the epigram was central to Odum’s holistic understanding of ecology.  In the mid 1960s he wrote that there were two types response to discussions about ecology as a system’s science.  One group of responders would affirm, he thought, that “any school child knows that the whole is not a sum of the parts”, but another “remains unconvinced that there is anything really new or different at ecological levels that can not be ultimately explained either by the reduction of the whole into even smaller parts…”[1]  Identifying the most appropriate unit of analysis was critical to humanity adequately addressing of its environmental problems.  Odum recognized the ecosystem as that unit of analysis.  As he defined it, a definition that remains serviceable in contemporary ecology, the ecosystem was

“made up of all the organisms in a given area (that is, “community”) interacting with the physical environment so that a flow of energy leads to characteristic trophic structure and material cycles within the system.”[2]

Asserting that the ecosystem whole was greater than the sum of its parts meant that ecological analysis restricted to another ecological level – individual organisms or biotic communities, for instance, would fail to capture the dynamics of nature in a way that permitted us to ameliorate our impacts.

The attributes of ecosystems, properties which for the most part could not, according to Odum’s adage, be predicted from an examination of the components constituting the ecosystemic whole include the following: community energetics (production, standing biomass, nutrient cycling, and overall metrics of ecosystem stability).  In his list of 24 ecosystem attributes Odum includes metric of biotic community structure, life history and strategy since lower ecological levels may not add up to the properties of the whole, nonetheless the whole may constrain the parts.

By defining the ecosystem in a holistic fashion, one with characteristics such as balance, integration, the possession of emergent properties, stability, equilibrium, attainment of a steady-state, and homeostasis, Odum tied his ecology to a venerable tradition, one that dates to the earliest Greek conceptions of the natural order known as the Balance of Nature.  The Balance of Nature defined in the most general terms is where the interrelated components of a system operate in harmony, thereby reflecting a stable equilibrium of traversing forces.  This dynamic harmony persists unless disturbed by external interventions.  Odum’s unit of concern is primarily the ecosystem, but since his ecosystem is the upper-level entity that constrains those levels below it in the ecological hierarchy, therefore where he expresses a Balance of Nature perspective it ramifies throughout the entire system.

My point here is not to adjudicate the appropriateness of claims made on behalf of holism (I will address this elsewhere) but rather to make explicit the degree to which Odum relies on a notion of the Balance of Nature, a view that was arguably overthrown in the ecology of the later 20th and early 21st Century.  I rely here mainly upon an analysis of Odum’s lauded review paper entitled The Strategy of Ecosystem Development which appeared in the journal Science in 1969.  The paper has been enormously influential having been cited more than 3000 time since it was published.  It arguably captures a particular moment in the history of environmental thought although the argument of the piece and its Balance of Nature premises are largely retained in the fifth edition of Odum’s successful textbook, Fundamentals of Ecology which appeared in 2005 (a few years after Odum’s death in 2002).[3] So even if the field of ecology has, as some claim, largely abandoned a Balance of Nature perspective in recent decades for one that stresses disturbance, chance, and non-equilibrium Odum certainly retained his commitment to an equilibrium view of things up to his death, and he continues to inspire a holistic spirit through his students and through his textbook.

Natural ecosystems, Odum asserted, were integrated wholes, and developed in a manner that parallels the development of individual organism or human societies.[4]  On the one hand the expression of similarities between ecosystems and organisms, even when expressed somewhat neutrally as a “parallel”, troubles the contemporary ear, and yet it also harkens back to some fairly ancient views of the natural world, as we have seen elsewhere).  This development of the natural systems, succession in other words, is orderly, predictable, and directional. It is mechanistically directed by the biotic community’s modification of the physical environment.  Importantly, it leads to a stabilized ecosystem with predictable ratios of biomass, productivity, respiration and so forth.  The “strategy” of ecosystem development, as he called it, corresponds to the “strategy” for long-term evolutionary development of the biosphere – “namely, increased control of, or homeostasis with, the physical environment in the sense of achieving maximum protection from its perturbations.”  Homeostasis etymologically derives from the Greek standing still and in the sense that Odum means to imply, indicates a dynamic and regulated stability.  So the strategy of successional change is for the system to achieve a balancing of forces that confers upon it a dynamic stability.

The degree of protection that ecosystems have from perturbations comes in part, Odum claimed, from the increasing complexity of food webs as succession proceeds.  The mechanisms – both antagonistic and mutualistic – that develop between species confer this stability. Though the patterns of diversity during succession may be quite variable – often increasing in early succession, peaking in middle succession before declining, though Odum makes an interesting point that “organic extrametabolites” by which one supposes he means exudations into the environment, increase during succession, and these serve as an indicator of increasing biochemical complexity.  This is important because such compounds can impose some regulation of populations, “preventing population from overshooting the equilibrium density” and in this dampens oscillation and promotes stability.  Though Odum equivocates on the cause-and-effect relations of diversity and stability, nonetheless, he declares that if the relationship is real then it means that conservation is justified on “scientific as well as esthetic grounds”.

Now the upshot of Odum’s analysis of the development of ecosystem attributes is that the net result is a development towards “symbiosis, nutrient conservation, stability, a decrease in entropy, and an increase in information.”  In other words as a system develops over time the elements increasingly operate in harmony and the integration is a reflection of an equilibrium emerging between opposing forces.  These are characteristic of a Balance of Nature perspective.  To illustrate, in the 1969 paper there is quite extensive use made of terms that code for a Balance of Nature perspectives.  Among the specific claims are that energy fixed tends to be balanced by the energy cost of maintenance (thus autotrophic and heterotrophic metabolism are balanced especially in the climax community); minerals in soils are balanced as succession proceeds contributing to a “tightening” of nutrient cycling during development; secondary metabolites may be important in regulation populations at a equilibrium density; species with lower growth rates but better competitive abilities are favored under the equilibrium density of late successional stages; the time required to reach a steady state may vary not only with different ecosystem attributes in the same physical environment.  These terms are used extensively - “stability” alone is used 13 times in the paper; balance 10 times.

Of course, it is not as if Gene Odum stands on trial here of covertly advocating a Balance of Nature perspective.  He made no bones about it.  I am not therefore claiming as a great investigative coup the discovery that Odum’s ecology, with it holistic commitments to the developmental emergence of homeostatically-regulated ecosystems, has conspicuous Balance of Nature commitments.  After all in his account of the history of the ecosystem concept Frank Golley asserts that the Odum conception of the ecosystem asserts both its self-regulated and it “goal-seeking” properties.[5] However, I want to highlight the fact that as an inclination towards holism, teleology (goal-directedness), equilibrium, and balance declined in ecological science the Odumite conception of the ecosystem was increasingly criticized.  Furthermore, and perhaps less remarked upon, the implications of ecology for the sensible management of human affairs differs under the assumption of balance than it does in the new non-equilibrium, disturbance oriented models.

I will take up the explicit criticism of the Odum ecosystem concept in the next post, and show that an view of the ecosystem that stresses it holistic properties will have quite different implications for environmental practice than one which other, arguably more contemporary (or more fashionable) conceptions of ecology.