Kant makes me sick: Russell, Moore and Carnap and the liberation from Kant 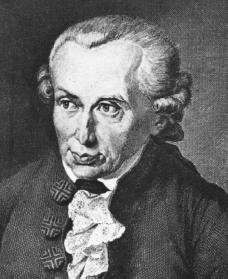 In a number of philosophical memoirs Bertrand Russell describes his break from the Kantian (and Hegelian) tradition in which he trained.  Russell’s first book, an extension of a fellowship dissertation, took up the Kantian question, “how is geometry possible?” An Essay on the Foundations of Geometry elaborated a “mainly Kantian” theory of geometry in which he claimed that geometry is possible “only if space is one of three varieties, one of them Euclidean, the other two non-Euclidean but have the property of preserving a ‘constant measure of curvature’.”  As Russell noted, this was a claim subsequently undermined by Einsteinian General Relativity.  On later reflection, he claims that his book does not contain “anything valid”.  A heavy price to pay, perhaps, for its Kantian commitments.

The retreat from Kant was not merely a matter of scholarly progression.  For Russell, there was an emotional appeal to setting Kant aside.  He records it as “a great liberation, as if I had escaped from a hot-house on a wind-swept headland”.  Furthermore, he claimed that he “hated the stuffiness involved in supposing that space and time were only in my mind”.  Elsewhere, he further underscores the emotional flavor accompanying his disagreements with Kant, regardless of any claims about their veracity, indicating that he finds “displeasing” any attempts to “humanize the cosmos”. “Kant made me sick”, Russell reported to Alan Wood.

The pattern among notable analytical philosophers at the turn of the last century of training in, and often writing on, Kantian themes, before ostensibly rejecting Kant is remarkable.  In addition to the example of Russell, G.E. Moore wrote his fellowship dissertation The Metaphysical Basis of Ethics (1898) under the influence of Kant and the neo-Hegelian F.H. Bradley (though he was by no means uncritical of them).  In later influential papers and books his work took a more decidedly anti-Kantian direction.  In an influential paper The Nature of Judgement (1899), Moore took aim at Kant’s (and Bradley’s) theory of judgment and states
“it seems plain that a truth differs in no respect from the reality to which it was supposed merely to correspond: e.g. the truth that I exist differs in no respect from the corresponding reality — my existence. So far, indeed, from truth being defined by reference to reality, reality can only be defined by reference to truth. (‘Truth’ 21).
Rudolf Carnap, in his turn, wrote a doctoral dissertation Der Raum (1922) which had a strongly neo-Kantian flavor.  Once again this Kantian influence is later repudiated in significant works such The Logical Structure of the World (1928) and The Logical Structure of Syntax (1934).
Moore, Russell, and Carnap are rostered here (as they have been by Robert Hanna’s Kant, Science and Human Nature (Clarendon/Oxford University Press, 2006)) to illustrate that important philosophical movements in 20th century philosophy were developed (partially) in response to Kant, and that apparent weaknesses in these positions may be (partially, at least) remedied by a return to Kant.  For Hanna, the developments noted above (especially in the pattern of early career influence by Kant followed by a renunciation of key, Kantian premises), along with other turns in the history of analytic philosophy, serve to sustain an argument that problems in contemporary analytic thinking are traceable to the rejection of Kantian thinking along the way.  My task is not to interrogate Hanna’s claim (succinctly expressed thus: “the analytic tradition committed cognitive suicide by rejecting the very ideas of analyticity and analysis”) – though to do so would be a task of some interest, pedagogically at the very least.  Rather, I make the parallel claim that those early 20th century philosophers who laid the foundation for that period’s philosophy of science (a circle intersecting by way of logical positivism with those founding analytic philosophy) likewise have Kant to thank, and yet it is precisely Kant who is spurned (often testily, as we have seen with Russell above).  Furthermore, I propose that one may essay a return to Kant to address a number of problematic issues that have emerged in the contemporary philosophy of science.   In particular, the growing relevance of the more complex natural sciences (i.e. those, like biology that are less mathematically tractable) and the social sciences for the philosophy of science appears to invite a greater eclecticism in thinking about the nature of scientific arguments and explanations than had formerly been the case.  If the sciences under consideration by the philosophy of science include these more descriptive sciences then reconsidering the nature of scientific understanding becomes a larger task for which 20th century philosophy of science seems inadequate.
With these thoughts providing the broader context I am starting my work on Kant and the philosophy of science by posing the more circumscribed question: How does Kant conceive the project of The Critique of Pure Reason in relation to the enterprise of science, and what are the implications for this enterprise in the wake of the Critique?  In addressing this I have two movements in mind.  One the one hand, as we will see, the Critique assumes the success of sciences (and of logic and mathematics), and claims that this success is worth emulating on behalf of metaphysics (for convenience, this can be referred to as Kant’s Copernican Turn).  Kant’s concern, therefore, is not whether science is successful, but rather it is why it is possible.  Secondly, once metaphysics is set on its appropriate path, and a clarified appreciation of the limits of reason is secured, along with a positive account of how knowledge is possible, I will in future posts examine how these achievements in turn influence the scientific enterprise itself.  That such influence occurs is evidenced, it would seem, by the defection of Moore, Russell, Carnap and those for whom Kant was initially a resource, but from whose conclusions they retreated.  One can conjecture, therefore, that the initial appeal of Kant’s project is that it furnishes an account of how knowledge of nature can be created, but that transcendental idealism, and the supposed “humanizing of the cosmos” elaborated in the critique make it unappealing to the empiricist tendencies of many 20th Century philosophers of science.
Posted by DublinSoil at 9:02 AM