In a post earlier this week I retold the story of Genesis, giving it a systems theory spin. In that story I emphasized God’s role as creative disrupter. The story was a stretch perhaps; it was the best I could write on a hot Chicago day after 24 hours without electricity! A more deftly-told story related by systems theorists conveys other important aspects of the systems message. It goes like this. 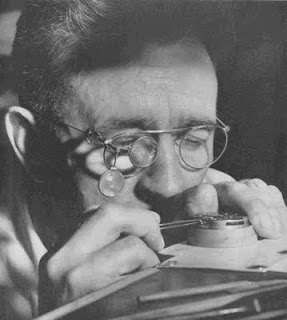 Once upon a time there were two watchmakers. The watches that they craft are each composed of one thousand pieces. Now, one of the watchmakers, a systems thinker seemingly, proceeds by assembling subunits of hundred component parts; these subunits when complete are stable. They can then be set aside before finally all completed ten subunits are assembled into the final product. The other watchmaker assembles each watch in its entirety after which that watch is complete and stable. Both watches are functionally indistinguishable. Since the watches are intricately made and take a considerable amount of time to assemble, each maker will get called away from their labour with some frequency. If the first watchmaker gets called away before a watch is fully assembled, the subunit that the she is working on falls apart but the already assembled subunits remain intact. Upon her return, the task is resumed with little loss of work. Her colleague’s efforts, however, decompose to hundreds of scattered pieces when she is disrupted and upon return the work must start from scratch.

The point of the story is somewhat obvious: we live in a conspicuously hierarchical world where many, though not of course all, of the objects of concern to us are composed of parts within parts (like Chinese boxes, as systems theorists like to say), akin in some respects to the watch assembled by the first of our watchmakers. Why is this the case?


This is what systems thinkers say is going on: hierarchically constructed systems are more efficiently designed and therefore should evolve more rapidly. Herbert A. Simon (1973) makes this point placing the argument in an information-theoretic frame work. Reminding us that all organisms are highly improbably structures that evolved rather rapidly, contrary to the apparent improbability of their doing so, Simon claimed that organismic evolution seems a long-shot only when its hierarchical nature is ignored. He provides an extremely simple mathematical argument: a system with k elements built in a hierarchical way with s subcomponents per level will evolve at a rate proportional to the logarithm to base s of k. In other words, to use Simon’s example, a system with 1025 atoms can evolve from one with 1023 as rapidly as one evolving from, say, 10 atoms to 103 atom. That is, one can go from impressively complex to mindboggling so just as quickly as one can go from simple to very slightly less simple.

R. V. O’Neill and his colleagues dutifully retell the parable of the watchmakers and put a little meat on these theoretical bones. The point of the watchmaker story, they say, is that the first watchmaker (who they charmingly call “Chronos”) used a “two-level hierarchical procedure so that a failure caused by an environmental perturbation is localized.” Furthering the explanation of why we should expect nature to work like Chronos, they contended that the hierarchical structure of natural systems is a consequence of the operation of evolution processes acting upon open, dissipative systems. In this assertion they draw on the work of Nobel laureate chemist Ilya Prigogine. Prigogine extended classical thermodynamics to living systems, including ecological ones; indeed he extended it to an analysis of traffic snarl-ups. Classically, systems are understood to equilibrate in a state in which they are most disordered (maximum entropy). As part of his explanation of how ordered systems can come into being Prigogine proposed what he termed “dissipative systems” – this describe those systems that can be maintained far from equilibrium (like a cold fridge on a warm day), and that persist without violating thermodynamic laws. They do so as a result of their capacity to share energy with their environment (they are open systems). In dissipative systems local small irregularities can grow and spread, and this results in the emergence of large-scale patterns. Living things, like other open systems, are made possible as highly ordered, non-equilibrium systems, by a flow of energy that maintains them in a low entropy state (i.e. living things are highly ordered till one pulls the plug and then like organic glop they equilibrate with their environment).

O’Neill and his colleagues claimed that a combination of the thermodynamic feasibility of complex organization and by what they term “stratified stability” makes the emergence of hierarchies not only permissible but likely. They mean “stratified stability” in the sense develop by Jacob Bronowski (of The Ascent of Man fame). Bronowski discussed the term in a 1970 paper where he claimed that “[the] stratification of stability is fundamental in living systems, and it explains why evolution has a consistent direction in time.” If stable units are discovered by chance during evolutionary time (Bronowski describes them as “hidden”), these units (or subunits) are ones that then provide “the raw material for random encounters which will produce higher configurations [next level in the hierarchy], some of which will chance to be stable.”

The usefulness of the two watchmaker story is that it suggests reasons, evolutionary and ecological ones why we should see hierarchies in the world. For see them we certainly do.
Posted by DublinSoil at 2:33 PM