Losing the Family Farm: A Case of Human Population Collapse in the Irish Neolithic 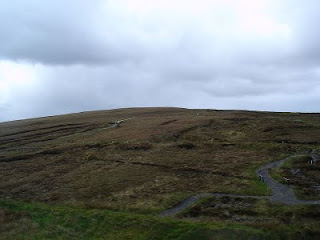 It is said that Ireland skipped the industrial revolution and instead, after its moment of prosperity in the 1990s, went directly to post-industrial decline.  Similarly, Ireland for the most part missed the Paleolithic, that stage in which humans settled down to the ecological business of living on this planet with their full suite of evolutionary gifts, and skipped straight to the Neolithic – the period associated with the origin of farming.  Indeed, most of the substantial early settlement action in Ireland was by farmers of the Neolithic. Since there is significant disdain in environmental literature for agriculture, privileging instead the salad days of Paleolithic hunter-gathering times (“the original affluent society”) it would seem that Ireland missed out on the all the glorious action.
My posts in the coming weeks will primarily be concerned with interrogating this disdain of many environmental writers for agriculture.  I start, though, by reviewing a case study in early Irish agriculture archeology, the Céide Fields, an early Irish agricultural settlement.  The fields are now covered by mountain blanket bog which grew up over the fields around the time that farming was abandoned.  Since the extensive field system of the Céide Fields were forsaken after a few hundred years of apparently continuous activity the question of whether this was the result of climate change or as a result of environmental modification imposed by farming has been raised.  Did it simply get too dry for farming, or did productivity crash and the human population crash with it?  If one of the complaints against agriculture is that it results in disastrous environmental modifications to the point where feedbacks ultimately result in declines in the human population, it will be instructive to see if this Irish case study provides evidence for the unsustainablity of early farming.  Why, if this case is not completely atypical, did agriculture ultimately supplant hunter-gather ways?  That is, if the evidence is that agriculture does not pay out its dividends easily, why has it almost universally adopted?  This question is made all the more pointed when laid alongside the re-evaluation of the hunter-gather mode of existence that has been proposed over the last couple of generations.  Thus, since early agriculture was more tenuous, hunter-gatherer life less arduous, how come the farmers won out?
Modern Homo sapiens has been around for 200,000 years or so, and adopted agriculture starting about 10,000 years ago.  To tell the human story as we do by moving quickly along to the story of civilization, an epiphenomenon of the agricultural revolution, is like recounting the adventures of one’s day by meticulously describing how you brushed your teeth.  In Ireland however, it is agriculture pretty much all the way.  Although, there is evidence of Paleolithic flint tools at some sites in Ireland, it is generally agreed that Ireland was not settled until after the Ice Age, approximately 8000 BC, by Mesolithic hunter-gatherers (throughout this post I retain the dating used by the principle sources I use).  There is a substantial body of work on Mesolithic peoples in Ireland, but these populations were tiny and Mesolithic sites are limited in their geographical distribution.  For instance at Mount Sandel, an early Mesolithic settlement and the earliest archeological site of significance in Ireland, the settlement is not very extensive.  The site is on eastern side of the River Bann near Coleraine in Northern Ireland and consists of several circular huts, with evidence of a considerable amount of flint working.  Although this is the most treasured of the Irish Mesolithic sites, it may have supported fewer than 15 people. [1] Because Mesolithic technology and culture is not a big factor in Ireland most of the interactions between the environment and people of Ireland have been during the Neolithic – farmers from the beginning.  This makes Ireland a compelling place to examine the implications of early agriculture on the land, and in turn for studying the peoples who depended upon these early agricultural environments.