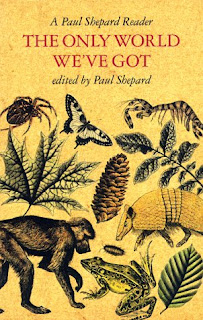 One of my first, perhaps not so bright, solutions to Irish environmental problems was to relocate all the peoples of Ireland west of the Shannon River, and restrict access to that rewilding environment only to those with a Bowie knife and a willingness to hunt for their food.  Not long after this musing of mine, a small clan of Irish broadcasters spent time in Connemara roughing it, and claimed, to national outrage, that they had slaughtered a lamb to survive (it is referred to in Ireland as the Lambo incident).  However, the idea that our abandoning, ten thousand years ago, of the primitive hunter-gatherer (H-G) lifestyle was unfortunate for ourselves and for the environment has been perennially part of environmental mainstream thought (versions run from at least Rousseau to David Abram).  The arguments were most forcefully articulated by the late Paul Shepard, an environmental writer and professor.  In this post I give a sketch of his argument on behalf of a renewal of the Pleistocene human in which he claims that that “secret person is undamaged in each of us and may be called forth by the most ordinary acts of life.”[1]

In his preface to The Only World We’ve Got a collection published in 1996, the year Paul Shepard died, we get a succinct overview of where this interdisciplinary environmental thinker’s work brought him.[2]  Or rather one might quip “to when” his thought brought him, for he was infamously nostalgic for Pleistocene times, dismissing the achievements of agriculture tartly in essays entitled Ten Thousand Years of Crisis, The Domesticators and so forth.
I present a simple overview of Shepard’s work, reserving more extensive comment and critique for a later post.  I will however prefigure that critique by commenting that the degree to which one becomes more sanguine about our present moment and less convinced of the delights of Pleistocene living, thus diminishing the comparative tension between these two periods, the less one might incline towards wanting to going home to the Pleistocene, to paraphrase the thrust of his posthumously published book of essays.