In Luster Diminished: Writing Kant out of the Philosophy of Science 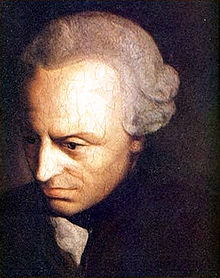 In the introductory chapter of his helpful Introduction to Phenomenology Robert Sokolowski reports on the genesis of his book project in a lunchtime conversation with a professor of mathematics and philosophy who reported on the following significant difference between mathematicians and philosophers: the former absorb the findings of their predecessors into their own work with little comment on or explicit acknowledgement of this foundational labor, compared with the manner in which “classical works often become enshrined as objects of exegesis rather than as resources to be exploited” in philosophy[1].
The observation regarding the absorption of earlier work is true of many natural science disciplines: for instance, rarely does one find explicit references to Darwin in the primary literature in ecology, even though Darwin provided the intellectual substrate upon which modern ecology is based[2].  Though one might be cautioned against overrelying on a taxonomic tool such as this one for distinguishing philosophical works from those in the natural sciences and mathematics, nevertheless the philosophy of science behaves quite philosophically when the tool is applied.   To illustrate, Rom Harré’s The Philosophies of Science: An Introductory Survey (1985) indexes Aristotle and Aristotelian (27 times), Hereclitus (and “Hereclitean individuals”) (5 times), Hume (3 times), Locke (5 times), J S Mill and his canons (22 times), and so forth.  Even Darwin gets mentioned (1 time).  Kant it seems gets two mentions in the book, although the second indexed reference cannot be found on the page referred to, and the first reference discusses Kant in relation to accusations regarding fundamental inconsistencies levied against Corpuscularian philosophy (something that Kant apparently levied validly, but “in a less clear form” than Boscovich, according to Harré[3]).  There are no references to any of the key terms of the Kantian lexicon, none that relate to the theory or practice of science (that is, no entry on a priori, transcendental idealism, analysis in the Kantian sense and so on.).
Harré’s book may be a little dated of course (evidenced by the lack of reference to Thomas Kuhn and Paul Feyerabend, to mention two philosophers who have influenced contemporary discussions in the philosophy of science).  Examining Alex Rosenberg’s Philosophy of Science: a contemporary introduction (2005)[4], with its eight separate references to Kuhn (one of which is, more or less, a chapter); and a modest two references to Feyerabend, one can remark its six references to Kant.  The first reference lumps Kant with Leibniz as “rationalist philosophers” who “set themselves the task of showing that the most fundamental scientific theories of their day were not just true, but necessarily true…”[5]  One refers to Kant’s assertion that there can be no Newton for a blade of grass, suggesting that Darwin has overturned this assertion.  The remaining references are all to Kant’s supposedly ill-founded Newtonian commitments, with Rosenberg arguing that Kant regarded Newtonian mechanics as necessarily true in the sense that they must be true in order for us to organize our experience at all.  The Kantian distinction between the a priori (independent of experience) and a posteriori (derived from experience), and the further key distinction between analytic and synthetic truths are treated in a fairly ample fashion.  The former are truths are those “without content”, and make no claims about the world.  Synthetic truth, in contrast, “has content [and] makes claims about more than one distinct thing or property in the world, and thus can actually explain why things are the way they are. The laws of nature are thus synthetic truths.”[6]   Rosenberg claims that the laws of nature (i.e. Newton’s) were held by Kant to be universal and necessary, and furthermore that they were synthetic a priori truths, a claim that Rosenberg contests by emphatically summarizing: “Kant was correct in holding that they laws of nature are synthetic.  However, for the philosophy of science the most significant problem facing Kant’s account of Newtonian theory as synthetic truths known a priori is that the theory isn’t true at all, and so cannot be known a priori true.[7]”   He establishes the falsity of Kant’s assertion by claiming that “experiment and observation” lead to the demise of Newtonian mechanics; therefore Kant cannot be correct about the possibility of synthetic a priori truths.

I am not concerned, at this point, with assessing Rosenberg’s argument but I note that this, despite its thinness, is one of the more extensive accounts of Kant’s relevance for the philosophy of science in contemporary accounts of this discipline[8].  As is the case in other contemporary accounts of the philosophy of science the space devoted to empiricism, a philosophical perspective that Kant was attempting to reconcile with rationalism, is impressively large.  In fact one index entry for empiricism refers to it “as official epistemology of science”[9].  Rosenberg is relatively deaf to rationalism, rationalists, and idealists (altogether these terms are referred to 4 times in the book).  If the sketch that I have provided on Kant’s place in contemporary textbooks of the philosophy of science does not proof Kant’s irrelevance for this subdiscipline, it surely, at the very least, suggests that his luster has been dimmed.
[1] Sokolowski, 1.
[2] Worster's Nature's Economy
[3] Harré, 132.
[4] Alex Rosenberg 2005 Philosophy of Science: a contemporary introduction. 2nd Edition. Routledge Contemporary Introductions to Philosophy.  Routledge.
[5] Rosenberg, 57.
[6] Rosenberg, 63.
[7] Rosenberg, 64.
[8] Several other intermediate and advanced overviews have been examined, and my empirical assertion remains unfalsified.
[9] Rosenberg, 207.
Posted by DublinSoil at 9:32 AM