Tim Morton’s Marinade: An Interdisciplinary Recipe for The Ecological Thought

From Timothy Morton, The Ecological Thought.
(TI, Emmanuel Levinas, Totality and Infinity: An Essay on Exteriority)

In the introductory sequence to each episode of Clever Apes, a science segment on WBEZ, a Chicago-based NPR affiliate, a small explosion sounds its bang and a kid goes “Whoa!”  That’s the sound of science.

But it may be more than that.  The frisson of a fantastic bang can reverberate as the disciplines collide and that sound alone might be reason enough, says Tim Morton author of The Ecological Thought, to tempt us to indulge in an interdisciplinarity exchange.  “The ecological thought”, Morton writes, “is intrinsically queer.  (Joining ecological thinking with thinking on gender and sexuality would make a fantastic bang, and this is reason alone to try it.)” 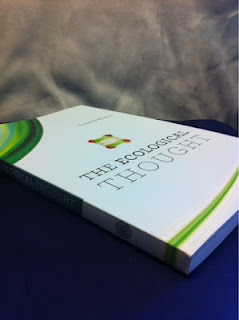 The ecological thought is that everything is connected, the living, the dead and the never-alive. Intertwined in this mesh are strange strangers, entities with whom (with which?) we are connected and yet cannot predict.  The more we learn about our mesh-mates the more crepuscular they seem.  There is more to say on this, in fact there will quite literally always more to say about this because there is no bottom to get to – it is a mesh.  I am re-reading The Ecological Thought with colleagues at DePaul’s University’s Institute for Nature and Culture and will write more specifically about the book in the coming weeks.

Now, if there ever was a thought that’s going to transcend a discipline it will be the ecological thought, since the ecological thought contains the disciplines that might try to grapple with it.  In her taxonomy of interdisciplinarity (ID) Julie Thomson Klein reported that the defining characteristic of transciplinarity TD (let’s assume here that TD is a variant form of ID) is that it is transcending, transgressing, and transforming. [1] That the topic of Tim’s book is transcending cannot be in much doubt for the reason stated above.  As we are pushed to the brink in thinking the ecological thought we are “goad[ed]..to greater levels of consciousness, which means more stress, more disappointment, less gratification(though perhaps more satisfaction), and more bewilderment.”  (ET, 135.)  The ecological thought transgresses in that we can’t be the same having really thought it.  If Tim is correct we can’t be the same because the thought nags us with the realization that we were never what we thought we were.  We are part of a mesh.  We have transgressed (Latin, transgredī, to step across, OED) – we have leapt out of our own skin, which never was much of a boundary anyway.  The ecological thought will transform us – it already has.

If other writers are like me – not a fully robust assumption, I realize – then they engage with an interconnected web of other writers whose work they seek out in order to amplify their own.  Before a writer’s work is out there, that is, before the work they are working on right now is out there – for instance this work you are reading, but not, in fact, as you now read it, rather as I write it –, before the work is in the ether or on the page as just one piece of text among those others, then the engagement with other writers is a lopsided affair.  The writers I employ to bring out the flavor of my own thought cannot be influenced in the exchange, except in as much as every reader will behold a different text, one determined by their interests.  I skim here, I re-read elsewhere.  I use the index, I read a footnote or two.  I read forward, I read back.  I circle around.  Their thought is not the same to me, not precisely anyway, as it is to you, nor even the same as I will be to me when I read it again for another purpose.  Perhaps the piece I write at a given time has been influenced by something I read a decade ago, or perhaps a dream, or a conversation and so forth.  In as much as it comes to me in words it is already a social project.  And then I write and I read, corroborate, I shore up my argument, I change my mind (occasionally), I edit, I submit.

I like writers who commemorate their exchange with other writers in an ample bibliography.  Or better still when they let references drizzle down the sheet to accumulate in the white gutter at the page end.  A detrital rain of ideas used up in the cloudburst above them.  Or perhaps a better way to think about this is that the footnotes/endnotes provide a safety net into which the writer or reader can release themselves when they falter in the trapeze-act of reading.  Look, it’s not just me saying this stuff, I’ve been in conclave with Foucault, or Kant, or Morton on this point!

It is not as if the works consulted became the building blocks from which the piece was constructed.  A little bit of Marx here, some Darwin there, a brick or two of Lefebvre, Diamond, Huxley etc would make a very rickety house.  And yet, if those texts have well been read they will, at the very least, flavor a banquet, to switch metaphors.  Conferred works may be in fact more like marinade than the ingredients for the meal.  Though the marinade is removed before the final cooking, one can often guess at their ingredients as one savors the juices.  Can it work in reverse?  When you look at the endnotes can you guess at the meal you are about to be fed?  Or at the very least can you evaluate the solicitousness of the chef?  Yoghurt, lemon juice, cumin, cinnamon, Serrano pepper, and fresh ginger?  It must be tikka chicken!  Balsamic vinegar, Greek olive oil, crushed garlic, salt and pepper.  Grilled vegetables anyone?

So what are the ingredients of the marinade in which Tim Morton drenched his neurons as he prepared the dish he calls The Ecological Thought? 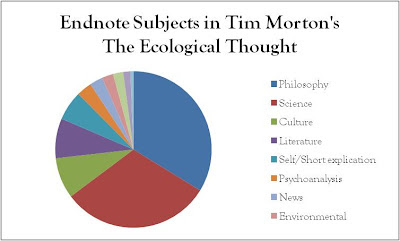 First a note on methodology.  I classified all of Morton’s footnotes into the following categories (Popular) Culture, Environmental Writing, History/Cultural Studies Literature, News story, Philosophy, Psychoanalysis, Reference, Science, Self-reference (including short explicatory notes),and Theology.  The allocations were made in a rough and ready fashion.  (I started the exercise as I made pancakes on Sunday morning for my kids.)  In general I used the disciplinary home of the author being referred to in making my designation.  However, one runs into problem here.  Daniel Dennett is a philosopher.  Does his book Darwin’s Dangerous Idea represent science or philosophy?  I classified it as the latter.  Many of the books that Morton used are interdisciplinary in nature, but since I wanted to interrogate the foundations of Morton’s interdisciplinarity I wanted to drill down a little to the disciplinary home of the footnote where this was possible (and in general it was).

Drum roll please! There are 474 endnotes appended to The Ecological Thought 34% of which are philosophical references.  31% of the sources are scientific ones.  No other category represents more than 10% of the total.  If this was an ecological community it would be one dominated by a couple of common beasts, and with a trailing edge of rarer species.  Theology is the rarest of the rare, the strangest stranger, in Tim Morton’s ecological community with about 1% of all footnotes referencing the discipline.

Treating Morton’s endnotes as a menagerie rather than as marinade suggests that an analysis of species diversity might be appropriate.  So I applied the Shannon diversity index to the data.  The metric is easily calculated as H'= -Σ(Pi) * lnPi, where Pi is proportion of the ith species.  Although it’s used extensively in the analysis of ecological community data the index, strangely enough, derives from efforts to quantify the entropy of strings of text![2] Overall, the Shannon diversity of Morton’s endnotes is in The Ecological Thought is 1.79.  In comparison, the bird community in Derrycunihy woodland in Killarney National Park in Ireland is just a little higher at 2.4! [3]  The evenness (a measure of the distribution of the footnotes over the "species" of disciplinary categories - calculated as H'/lnS) of Morton’s community is 0.74 compared with 0.8 for the bird community.  For further comparison, the diversity of references in one of my recently co-authored ecological papers using the same categories is 0.26, with an evenness of 0.24.  My writing is a virtual interdisciplinary desert, though if I used categories like restoration ecology, theoretical ecology, ecological methods etc it would score higher.  It would be useful to compare Morton against other contemporary writers on the environment, which I will do as I prepare dinner this evening, but at first glance Morton’s thought is as diverse as a community of woodland birds.