Reversing the Flow - a New Way of thinking about Restoration Management

Since this term "reversing the flow" is catching on in our research group I thought it might be useful for me to post the first time I used this term.  It was in a 2008 white paper written as part of the process leading to our successful Coupled-Natural-Human-Systems proposal (we now call this project RESTORE - Rethinking Ecological and Social Theories of Restoration Ecology). 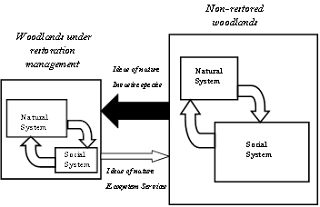 The Central Metaphor
In 1900 the flow of the Chicago River was reversed in one of the most dramatic engineering projects in the region’s history.  The project was a solution to a problem that otherwise compromised the human and ecological health of Chicago (Lake Michigan was unsustainably both a source of water and ultimately a sink for waste).  A little more than a century later, we should attempt to solve another significant challenge: how can we enhance the management of protected terrestrial ecological systems - areas that are typically swamped by influences from the vaster unmanaged metropolitan lands that surround them - in a way that simultaneously enriches both the human and ecological health of the region?  We need to investigate if ecological systems designed and managed with resilience in mind (arguably the current best management practices for restoration do not produce resilience results, and quickly revert to a ‘degraded’ condition) can exert a stronger influence on the landscape on a larger scale (which includes these large unmanaged areas) than is currently the case.  In this way we can arguably “reverse the flow” of restoration influence or more precisely modify the fluxes, of influence between managed and unmanaged preserved systems.

The Problem
Fragmented natural areas under restoration management are strongly influenced by entities and processes (concepts, perceptions of nature, nutrient pollution, invasive species etc.) from unrestored coupled natural-human systems surrounding them.  These ecological systems not under restoration management include those under different forms of management (parks, parkway forest etc.) as well as unrestored preserved. Ideally, the fragmented woodlands under restoration management may in turn positively impact the ecological and human well-being of these surrounding systems (providing ecosystem services, propagule supply of high-value species, sources of well-being and inspiration etc.).  However, for better or worse, the flow from the vaster unmanaged system arguably overwhelms managed natural areas.

Solution
There is a understudied relationship between aspects of woodland structure and ecosystem function and human health/well-being.  These relationships should be examined in both restored and control non-restored woodlands.  In addition, a variety of ecosystem services (hydrological, soil erosion, air quality (including particulates in smoke from controlled burns)) as well as a variety of human physical and psychological indicators] should be measured from sites in the Chicago region.  One can hypothesize that restored woodlands will have greater biodiversity and will be positively correlated with increased human well-being/health (at least for some factors).  If this is the case one can plausibly hypothesize that increasing the resilience of restored areas [decreasing the influence of the surrounding non-restored matrix on the small areas of restored woodland] and increasing the resilience of systems of management [encouraging effective sustained management, increasing the number of volunteers, recruiting youngsters, increasing optimism of those who devote professional or volunteer time to this work etc] will have a positive influence of non-restored areas.  This will emerge from increased understanding of the effectiveness of restoration and broader acceptance; managers may expand from core areas and restore adjacent lands etc.  In this way we will attempt to “reverse the flow” of management.
Posted by DublinSoil at 9:30 PM