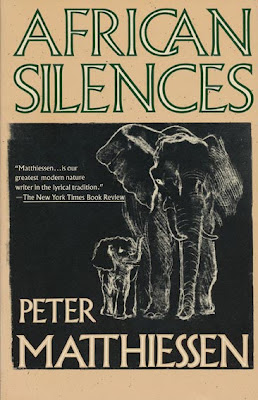 I recently finished reading Peter Matthiessen’s African Silences (1992).  Though it is less celebrated than some of his other books, for instance, The Tree Where Man was Born (1973), The Snow Leopard (1978) or his National Book Award winning novel Shadow Country (2008), nevertheless, it covers essential territory and twenty years after its publication it still deserves to be read.

African Silences examines a crucial conservation topic, demonstrates the pernicious impacts of humans on dwindling habitat, reveals a slightly fetishized awe of vast empty places, describes the vertiginous horrors of several potential wilderness deaths, applauds the merits of the old ways and traditional peoples, curses bureaucracies, casts its few crumbs of optimism along the way like edible markers on a dark path, and concludes prettily but gloomily.  Of course, it is tremendously depressing.  Which taken altogether is all to say that African Silences is an environmental classic.

African Silences covers three separate African trips.  The first was to Senegal, Gambia and Ivory Coast in 1978 on a wildlife survey of West Africa with Dr Gilbert Boese, then of Brookfield Zoo in Chicago.  They conclude that animals are fewer in both abundance and diversity than in East Africa.  Though this has long been known, of course, but Matthiessen points out that West Africa is not only more populous than East Africa but that this has been true for a long time.  Therefore he speculates that long-term human impacts may be a factor explaining the depauperate state of Western Africa’s fauna.  The second trip was to Zaire (now the Democratic Republic of the Congo) in 1978 with British ornithologist Alec Forbes –Watson in search of the Congo Peacock (Afropavo congensis).  Though they see the Eastern Lowland Gorilla in Kahuzi-Biega National Park, and later meet someone who has eaten a Congo peacock, Matthiessen nevertheless leaves without seeing this bird.  The final trip reported on in the book is to the Congo Basin to evaluate elephant populations, the size of which was a contentious matter back then, with Dr David Western.  They concluded that vast areas of forest in south Gabon, south Congo and western Zaire thought to harbor populations of forest elephants have disappeared.  That is, the whole forest has disappeared – destroyed or degraded.  Another observation is that there exists a wide and deep hybridization zone between forest and bush elephants.  Finally, they speculate that rumors of “pygmy elephants” in the forest are more likely to refer to independent juveniles rather than to a separate undescribed tiny elephant species.

A distinctive feature of Matthiessen’s writing in this book and in his other natural history travelogues is that he accompanies scientists in their work. Iain Douglas-Hamilton for example in The Tree Where Man Was Born; George Schaller in The Snow Leopard.  In most cases the observations that he makes on the patterns of animal distribution, the state of the habitat, or the results of surveys are available in a more technical form elsewhere.  These scientific accounts are sometimes more obscurely located to be sure, though Douglas-Hamilton and Schaller have written popular accounts of their work.  A significant value of Matthiessen’s accounts of his travels is that they are written in taut and marvelous prose, that he has a story-teller’s gifts, and that he shows a way in which a natural historian’s interest are not remote from his commitments to those people he loves (his family life features in The Snow Leopard), or to his spiritual inclinations (Matthiessen is a Zen Buddhist, a practice he substituted for psychedelic drug use).  Such prose cultivates an attitude of care in a reader, which the most exemplary statistics may not.

Echoing Rachel Carson, at one point in the middle of the book Matthiessen breaks from travel narrative and gives a detailed account of the depredations of the Ivory trade in Central Africa, and concludes that dismal account with the following sentence: “Whatever the reasons, a great silence has descended on one of the last great redoubts of wildlife on the continent.”  That African Silences is pervaded by melancholia is unsurprising.  It is unsurprising not just because we know enough about this world not to expect exuberance when a writer assesses the state of wildlife.  It is also because the genre of environmental writing is simply in the melancholia business.  Sadness, solitary, and dolorous are chief characteristics.  But these are not the only one.  Add exotic locations, large organisms, a whiff of misanthropy (Matthiessen is by no means the worst offender here: by his account Dian Fossey is) and nostalgia and all the ingredients are in place.  Matthiessen is not the first American environmental writer, but he is currently one of best and his work endures.  Thus one can reasonably say that he not only responds to the tradition but he has, in part created it.  The mood in which he writes, and the mood that we feel upon reading him, are part of environmental literature’s minuet that has played out across the generations.  Melancholia abides.

Peter Matthiessen will not in all likelihood ever write a chipper book.  His natural history work will worry is; his fiction will trouble us.  And though there may be a value to the sadness that pervades our thinking about the environment – sadness alone does not get us out of bed and into the world ready to rebuild and restore it.   There is more to say about this, but there I leave it for today!

Posted by DublinSoil at 2:17 PM