What follows are some reflections on the results of our MOLA restoration experiment.  Please note that I post these to provoke conversation and get your thoughts on soils and restoration.  The reflections are very preliminary and have not been peer-reviewed.  For ease of read (or quick skim) I have not included literature references or a bibliography.  In the coming weeks we will be sending a manuscript in for publication on the topic.  Lauren Umek is the project manager and is a senior scientist on the project.

For more background on the project see here and here. 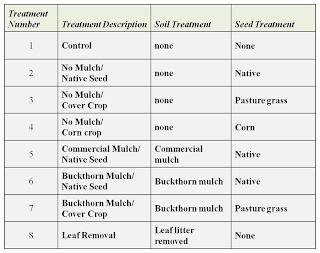 The analysis of soil nitrogen availability is a focus of many studies examining the efficacy of incorporating material of low carbon quality (e.g. wood mulch) into soils as a potential restoration tool.  This is because these treatments are hypothesized to reduce nitrogen, elevated in soil as a consequence of anthropogenic atmospheric input or as a legacy of fertilizer use in agricultural land.  Nitrogen elevation is known to be a factor in some invasions and in a concomitant loss of native species.  Defertilization (N reduction) in circumstances where land is managed for the protection of biodiversity may lead to a reduction in invasion and an increased prevalence of species of conservation significance.  Our treatments were designed to reduce the availability of soil nutrients, especially nitrogen, and thereby modify the structure of the plant community in revegetating plots in this manipulative field experiment.  We anticipated that the soil environment modified in this way would support a lower density of Rhamnus cathartica (hereafter “buckthorn”) a dominant shrubby invaded of Midwestern Woodlands.

We found that for some of the nutrients measured in our study, including nitrogen, availability was indeed reduced.  However, these effects were not consistent over the two years that we measured them with the important exception of phosphorus availability which increased in plots that had received a mulching treatment.  Consistent with our expectations buckthorn seedlings and saplings density was significant reduced in all plots compared with our controls (where buckthorn was not cut).  Additionally, those plots that had received wood mulch, either of buckthorn or commercial mulch, had lower buckthorn seedling or sapling density than all other treatments.


We studied the availability of several nutrients other than nitrogen in our treatment plots and controls.  These included a range of ecologically significant anion and cation species as well as heavy metals including zinc, lead and cadmium.  The elevated phosphorus in mulched plots by the end of the second year is especially remarkable as the role of buckthorn presence or removal in the phosphorus cycle has not, as far as we know, received significant attention before.  Similarly, the observation that zinc and lead were elevated in treated plots is seemingly a novel observation.  In both cases the elements were elevated in plots from which buckthorn had been removed, and were not an effect of mulching.  Although the elevation of zinc diminished over time, in contrast, the mobilization of lead became more pronounced over time.

The reduction in the prevalence of buckthorn seeds and seedlings in plots treated to reduce nutrient availability is consistent with our expectation.  That is, the mulched plots were less invaded than other restoration management treatments.  Nevertheless, the interpretation of these results is complicated by three factors.  Firstly, the reduction in nitrogen is small and not consistent across the two years of our observations.  It is therefore unlikely to be a primary factor in influencing buckthorn prevalence.  Secondly, the examination of other soil nutrients and ions showed that the treatments resulted in several significant impacts on the soil environment some of which may also have had an influence on the revegetation of the plots.  Finally, in this experiment we were primarily concerned with installing restoration treatments that managers might reasonably be able to implement.  The mulching treatments were therefore incorporated into the soil by rototilling, so these mulching treatments are in fact a compound one constituted by carbon additions and by soil disturbance.  Both of these aspects may have had an influence on the plant community.

There is a growing appreciation that approaches to restoration that incorporate knowledge of the soil into management practice may be more effectiveness in achieving their stated objectives.  This is because the plant community, the diversity of which is often the target of ecological restoration practice, is both influenced by and in turn influences soil properties.  Since sites with soils having elevated nutrients are often rapidly reinvaded after restoration, the incorporation of soil ecological knowledge (SEK, sensu Heneghan et al. 2008) appears to offer the prospect of improved outcomes.  The implications of our study for applying SEK to ecological restoration are several, though none of these are straightforward.  The observation that mulching treatments (addition of low quality carbon and its incorporation into the upper layers of the soil) reduced the prevalence of buckthorn seedlings and saplings suggests that this may provide a promising approach to restoration in the face of buckthorn.  However the precise mechanism connecting changes to the soil environment to reduced prevalence of the invasive species remain unclear for the reasons stated above.  The changes in the availability soil nitrogen, phosphorus and other nutrients are suggestive but further work remains to be done before we make a clear recommendation.  To be clear we need to have a clearer understanding of the implications of the sorts of combinations of simultaneously elevated and reduced soil nutrients for the plant community and for critical ecosystems function.

This is the first study, as far as we know, that shows that buckthorn removal is accompanied by the elevated availability of lead and zinc.  Since the methods that we used (plant root simulator probes) allowed us to evaluate the relative mobility of these elements only in the upper layers of the soil, caution is urged in interpreting the results.  If this is a general phenomenon careful study of the fate of lead in the environment of restoration project will need to be undertaken.  If may be that this represent a small scale redistribution of this heavy metal in the superficial layers of the soil, though if significant lead is mobilized it will have an adverse impact on subsequent uses of the sites from which buckthorn has been removed.

In most cases where mulched treatments had effects on soil nutrient availability or on buckthorn prevalence there was no difference between mulch comprising buckthorn woodchips or commercially available mulch.  We employed buckthorn mulch as a treatment because it is, of course, the most abundant source of low quality carbon available in restoration plots in the region in which our work was undertaken.   The use of commercially available mulch would make its use prohibitive expensive for many restoration projects.  However, some response variables significant differ between the buckthorn and the commercial mulch.  These variables include the elevation of phosphorus availability in buckthorn mulched treatments.  Increased phosphorus availability will also have implication for restoration that merit close attention.

We make the distinction in this study between buckthorn seedlings and saplings.  We applied this distinction based upon size and the woodiness of small stems.  Overlooked woody saplings may make an important contribution to the apparent reinvasion of cleared plots.  Assuming this to be the case restoration managers are urged to follow up on land from which buckthorn has been cleared to remove these saplings either physically or chemically.  Both seedlings and saplings were reduced in our mulched treatments.  The reduction of saplings, in particular, may be as a consequence of tilling the mulch into the soil.

The treatments we used in this experiment involve some fairly pronounced soil disturbances and would therefore have limited application for intact soil which may have a soil structure worth preserving, in addition to this soil being an important source of plant and microbial propagules.  Since such soils are increasingly rare, our more radical restoration treatments might, when their impacts are more fully assessed, have broad applicability.

Posted by DublinSoil at 3:49 PM