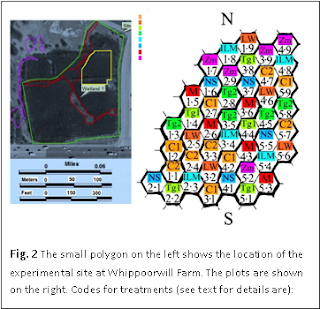 This work was undertaken with Lauren Umek who is the project manager and with the assistance of Tom Murphy from DePaul and a crew of dozens.

This recent restoration experiment directly addresses the hypothesis that successful prevention of the re-invasion of species like European buckthorn, Rhamnus cathartica, will be promoted by reducing soil nitrogen (N) levels.  High N in soils may be a legacy of long-term invasion by buckthorn, and other invaders, which have high N levels in their leaf litter.  As a consequence of reducing N as we attempt to do in this experiment, and perhaps this is counter-intuitive, the success of native plant diversity may be increased since the native community does not then have to complete with an aggressive invasive species.

In this experiment we chose those strategies for manipulating N availability in the upper soil horizons that managers might be expected to adopt if our experiment demonstrates desirable outcomes. These management techniques included mulching with buckthorn woodchips or with commercial mulch, a two-year corn-harvesting regime, and mowing and removal of a cover crop. Both of these strategies are expected to  reduce N levels in the soil and therefore reduce reinvasion rates.


Experimental Site
The experiment was conducted on a 2.8-ha site operated in Mettawa IL.  The site was used as a horse pasture up until 1990, at which time it was abandoned and became a monoculture of buckthorn. Approximately 2500m2 of the site is allocated to this experiment (see the picture above). The site owners has contracted with two commercial restoration companies to manage the remainder of the site.  One used the approach typical of the Chicago region: cutting buckthorn and broadcasting native seeds. The other company attempted to incorporate buckthorn mulch into the soil prior to planting native seed. Although their work is not part of our experiment, we established quarterly meetings with them so that we will be able to evaluate the potential of our alternative strategies for regional application. Work on the site started in February 2007 with hand-clearing of buckthorn from the experimental plots.

Experimental Design
Each experimental unit is a 52-m2 hexagonal plot (see picture above). The treatments were arranged as a randomized block design of 5 blocks (arranged along the sites suspected hydrological gradient) and 8 treatments were implemented as followings:

The rationale of each treatment is as follows:
Treatment 1 – Control for Treatment 2 and reference site for other manipulations

Treatment 2 – Removing buckthorn leaves is hypothesized to reduce densities of earthworms, whose ecosystem effects are postulated to foster buckthorn germination and growth (Heneghan et al. 2002, 2006b, Frelich et al. 2006). This treatment does not test a management practice, but instead addresses the more basic question of whether or not buckthorn increases populations of exotic earthworms.

Treatments 3 & 4 – The standard approach to restoring buckthorn-invaded sites is to remove buckthorn and then plant native seeds to reestablish a high diversity of native plants. We replicated this approach in Treatment 3, employing a species mixture that includes the grasses Andropogon scoparius and Bouteloua curtipendula; and the forbs Cassia fasciculate, Desmanthus illinoensis, Echinacea pallida, Echinacea purpurea, Liatris aspera, Liatris pycnostachya, Monarda fistulosa, Penstemon digitalis, Ratibida pinnata, Rudbeckia hirta and Zizia aurea (in all 30 forb species are in the mix). With Treatment 4 we will evaluate a variation of this standard restoration practice by planting a cover crop of pasture grasses Phleum pretense, Dactylis glomerata, Bromus inermis and Avena sativa. The cover crop was harvested, planted, and harvested again in the following year before planting with native seeds.  Cover crops should retard the growth of less desirable weeds (Ilnicki and Enache 1992, Shebitz and Kimmerer 2005), and harvesting cover crops will reduce soil N.

Treatments 6 & 7 -- The use of mulch and other low-quality (high C:N) substrates as a soil amendment in restoration has become prevalent (Bear et al 2006).  Cellulose is a recalcitrant substrate and nitrogen is immobilized by the microbial community as it decomposes, reducing the availability of limiting nutrients for plant growth. This management technique can reduce colonization by non-native species in prairie restorations (Baer et al. 2003).  Since the most readily available source of cellulose in restoration plots is mulch prepared from the cut buckthorn (C:N = 71, Umek et al., unpubl.), we chipped all buckthorn onsite and used a rototiller to incorporate it into the soil at 210-220kg per plot (~4 kg/m2), a rate similar to those effective elsewhere (Averett et al. 2004). Plots were then planted with either native seed (Treatment 6) or a cover crop (Treatment 7), using the same seed mixes and schedule as in Treatments 3 and 4, respectively.