A Note on Nietzsche as a Wilderness Thinker 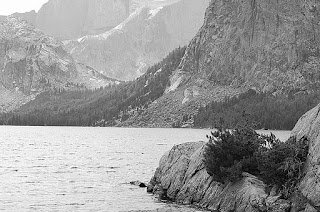 Nietzsche, retreated from the city (Basel) in 1879, retired from the habitual, and nurses upon wild things.  In this leave-taking and this suckling on the wild, Nietzsche can be identified as a writer of a particular tradition.   Alongside Henry David Thoreau, John Muir, Aldo Leopold, Edward Abbey (a truncated roster of influential writers on wilderness (and in some cases the Wild)), Nietzsche is an environmental writer in general, and a wilderness writer in particular.

The tradition has some recognizable characteristics: a celebration of nature as special place and governed by special processes, a suspicion that these places and these processes intensively prevail elsewhere, a usefulness to seeking these out, a normative role for these places and processes.  The city is held in contempt. The wilderness writer needs solitude.  A deeper excavation reveals that this thinking as part of a declensionist tradition (things are NOT better now!).  This leads, not inevitably but invariably to negative suspicions about the human animal.  If remedies exist they exist in a return to a prior place, a prior time.  The wilderness writer can lead the way – the environmental writer has a priestly vocation; he (typically, he) can initiate us into natures’ secrets, and can (if we act right now) lead us to the altar to confess, (re)consecrate and (re)commune.


Nietzsche shares in the tropes of this wilderness tradition (leaving town, drawing inspiration from wild landscapes, ruminating on the special (psychological) processes that conjure up the human).  Nietzsche disdains the city.  Zarathustra, for instance, after castigating the foaming fool who condemns the great city and declaring that he despises the fool’s despising, ultimately concedes his, Zarathustra’s, agreement with his ‘ape’ and declares the city ‘nauseating’.  Central to Nietzsche’s thinking, from The Birth of Tragedy to his last writings is a castigation of notions of progress.  This is not just Nietzsche’s tradition, it is also Zarathustra’s.  Zarathustra wilderness tradition, a “Syrian” one, is a tradition that links him with a biblical and prophetic culture, and in fact, links the earth-oriented writing of the American Wilderness tradition (one of the US most important intellectual exports, according to historian Roderick Nash), ironically, with the otherworldly.

In very critical, important, ways he diverges from the tradition.  His challenge is to overcome contempt for humans (not a gesture in the classical wilderness tradition).  His remedies are found not in return but in overcoming, in the overhuman.

***
I have analyzed approximately two dozen passages by Nietzsche in which the wild or wilderness features prominently.   These come primarily from ‘The Genealogy of Morals’ and from ‘Thus Spoke Zarathustra’.  Even this smattering of Nietzsche’s deployment of the terms provides material too rich to exhaustively analyze in this note.  I will therefore restrict myself to some main points, and defer a longer account.

The wilderness of which Nietzsche speaks is a desert, but not the one that “educated people imagine”. (GM, III, 8).   Nietzsche’s wilderness opposes man.  For instance, one may go into the wilderness and break a "venerating heart" (TSZ, The Famous Wise ones) or “suffer[..] thirst with the beasts of prey”.  In fact, there is no shortage of wild and dangerous beasts in the Nietzschean wilderness (see TSZ Out of Service; Science).

The wilderness is the place where men bound by custom and habit can enjoy freedom from the tensions of confinement and community.  In the wilderness they can return to the “innocent consciousness of a wild beast of prey” (GM, I, 11).  At the “bottom of all these noble races we cannot fail to recognize the beast of prey, the blond beast splendidly roaming around in its lust for loot and victory”.  Thought of in this sense wilderness is not just a locus in which such a potential atavism can present itself, it is a necessary physical place because from “[t]his hidden basis from time to time needs to be discharged…” (GM, I, 11).  Though suggestions of “murder, arson, rape, and torture” are on the extreme end of the range, there is a strong whiff of the “received wilderness tradition” in such manly-sounding fare.  The Wilderness Act of 1964 which created a Wilderness preservation system, now containing about 4% of US land is erected, in part, on such sentiments.

There is nothing remarkable in this, that the great psychologist of the 19th century should respond to and resonate with the great themes of the age (he amply responds to Darwin, the great naturalist), and unsurprisingly given his enormous sensitivity (a sensitivity that extents to flowers) he shares an ambiguity about the fate of wild places along with Emerson, whom he read.  The sensitivity is expressed in his earth-centered philosophy (“I beseech you, my brothers, remain faithful to the earth, and do not believe those who speak to you of otherworldly hopes!  (TSZ, Zarathustra’s Prologues; Nietzsche’s emphasis in original)).  Nietzsche’s declaration of the death of God, and his redirecting of our gaze towards the earth, is not the meandering poesy of a Nature Poet, but, at the same time, Nietzsche’s considerable sympathy with, and creation by the wild is surely not incidental.

Though I have sketched, very briefly, Nietzsche’s nature sympathies, this is ultimately what I have been “preparing to say” (to talk here with Thoreau): Nietzsche hypothesizes that  origins of bad conscience occurs when “instincts that do not discharge themselves outwardly turn inwards….thus it was that man first developed what was later called his “soul”.” GM II, 16.  Thus a lack of external enemies, and a turning away from the wild, resulted in a man that “lacerated, persecuted, gnawed at, assaulted, and maltreated himself.  The qualities of both the generalized enemy (anonymous and opposed to us) and the wilderness (anonymous – it is noplace in particular, but in a very modern way is an idea of a place – and is opposed to us).  Thus the Nietzschean wilderness shares with the enemy a role in the shaping of our happiness and power.  Its very anonymity and opposition are important to us.  The wild develops autochthonously, and we cannot help but to be influence by its opposition.  We are the mirror of the wild.  Our fall is when it falls silent to us.

Posted by DublinSoil at 7:41 AM