Dude, your evolutionary theory just ate my philosophy – Leopold and the evolutionary possibility of a Land Ethic

Part of a series on Aldo Leopold’s “Land Ethic” 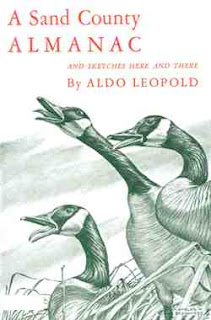 Somebody somewhere at this moment is writing a reverential essay about Aldo Leopold’s Land Ethic.  I feel a little ungenerous, I admit, to write in less than enthusiastic tones.  It seems to me though that if the land ethic, Leopold’s extension of the ethical sequence to encompass the land community (including other creatures) and thereby forming the basis for new conservation values, was going to work out we’d have stronger hints of this already.  After all, this classic essay in conservation ethics was published in 1949 and has been the subject of lively interest in the intervening year.  I am familiar with a lot of the literature surrounding the essay; certainly I know where to find those pieces I have overlooked in the past.  Its influence on the history of conservation biology cannot be overstated.  To illustrate, in A Companion to Environmental Philosophy (I choose this because it’s here beside me on the desk), the index records entries for “Land Ethic: biotic community” extending over 7 lines, with 18 separate entries (some of which bracket several pages of the text).   I am interested, however, in reading the essay afresh; a reading unencumbered by the scholarly paraphernalia available for this work.  I know therefore that the mild critique I offer here and in future posts have probably been fended off; ably deflected by the academic phalanx the surrounds Leopold’s work, nevertheless, in the spirit of inquiring if the land ethic can be rejuvenated I pose some challenges again.  It may be that we must risk deposing this king of ecology.  In other words, I ask if the land ethic must be rescued from Leopold’s treatment of it? It’s time to read Leopold as if he’s being read for the first time.

In the essay Leopold gets down to business quickly.  He claims ethics on behalf of ecology and evolution, relieving philosophy of its responsibilities in this department.  Not atypically, when such acts of disciplinary burgling occur, scientific disciplines replace a remedial understanding of a philosophical precept with an oftentimes vapid translation into the terms of its own discipline.  For example, the newer paradigm of biodiversity and ecosystem function (BEF) attempted in the 1980s to supplant traditional justification of conservation action rooted in ethics, before certain limitations of this new BEF viewpoint became apparent.  But let’s give this to Leopold for a moment.  From an ecological/evolutionary perspective he claims that ethics is “a limitation of action in the struggle for existence”.  Note, that this is not just evolutionary theory; it is gratifyingly your granny’s evolutionary theory – a page out of the Darwinian notebook.  Quite appropriately he identifies as a central problem in evolution the explanation of social behavior.  Stated crudely, if the dynamo of Darwin’s evolutionary mechanism is assessed in increases to individual fitness in the competitive struggle for existence, how can one explain individuals setting aside their interests for the benefit of others (the social contract)?

Leopold does not provide a mechanistic answer, nor, in fact, does he discuss mechanism in detail; he points to the mere fact of the emergence of community as something to marvel at: he points to co-operation, to symbioses and so forth.  That is, for his purposes he needs only establish that an extension of ethics to collectives beyond the individual is “an evolutionary possibility”.  It was, he claimed, an evolutionary possibility for ethically informed cooperation to replace an original “free-for-all competition”.  Now here we may have a little hitch – if the extension of ethics which Leopold described as being “co-operative mechanisms with ethical content” is embedded in evolutionary theory, is it useful or interesting from an evolutionary perspective to identify these ethical mechanisms as the agents ushering in the “advanced symbioses” of politics and economics?  Cultural flexibility may indeed be an evolved characteristic; nevertheless the claim that we should think about ethics primarily in its evolutionary rather than its philosophical context is strange since the extension of ethics to the land community does not present a novel evolutionary mechanism with implications for the social behavior of organisms other than humans.  The mechanisms may be a humans-only affair and if this is the case, they might, therefore, be imagined to benefit from the richer (philosophical) tradition that Leopold was content to set aside.  Could it be that the insight that Leopold offers us here – that a land ethic is not precluded by evolution – an insight purchased at the price of a closer philosophical inspection of the question of ethics is the reason why the land ethic offers us striking phrases, strong encouragement, and lofty proclamations about the degree to which all of this is necessary, but no actual path forward? William Jordan III makes this point effectively in his book Sunflower Forest where he also elaborates the point that community, a key word in the development of the land ethic, is easier said than done..

The extension of ethics beyond its primordial glimmerings in inter-individual relations through those rules that bind an individual to society, and on ultimately to an ethic dealing with “man’s relation to the land” is not infeasible from an evolutionary perspective.  Sure, this sounds reasonable.  However, as I've suggested above it’s a small purchase for the cost of abandoning philosophically-informed ethical theory.  The philosophical definition of ethics that Leopold subsumes under his ecological-evolutionary one is “a differentiation of social from anti-social behavior.”  Roughly speaking this is morality.  Though environmental ethics has since rejoined the flock of ethicists grazing the philosophical mountainside, and draws upon intellectual resources that go back to the pre-Socratics, Leopold wandered off that mountainside and for better or worse deprived the land ethic of that mountainy feed.

I would regret being placed in a camp that thought that a philosophical ethics offers a huge amount in terms of directly creating an ethical world.  But those who want to create an ethic might, it seems to me, benefit from being edifying by the history of philosophy on this matter.  Leopold assuredly wanted to create a new ethic.  What would this ethic do?  It would affirm the right of the community of life to a continued existence.  To do so, human-kind needs to be unseated as conqueror and reinstalled as citizen in the land community.  This more harmonious relation of man and land is what, Leopold told us, is meant by conservation.  How is this demotion, re-installation and new harmony to be achieved?  Not by education it seems, but by an “internal change in our intellectual emphasis, loyalties, affections, and convictions.”  What will guide us to this transition?  A new “image of the land” will: a vision of the land as a “biotic mechanism”.  In particular this is an ecological vision – the Eltonian biotic pyramid, food chains and so forth.   What ultimately would this change of emphasis to an ecological vision do for us? It would provide a basis for a “love, respect and admiration for the land”.  Without these values we will not achieve a land ethic.  And, as Leopold affirmed, these values are not economic ones; he means here “value in the philosophical sense.”  Thus, late in the essay, we return to philosophy.  Ecology can inculcate in us a philosophical appreciation of the value of the land.  How exactly does one think about philosophical value?  Well for that one might need a philosophy of value, which along with a philosophical ethic is precisely what Leopold neglected to provide.  An investigation of a theory of value that might lead to a more fully developed environmental ethic is being undertaken by an interdisciplinary group to which I belong and is led by William Jordan III.

Posted by DublinSoil at 6:42 PM