The Ecology of Knowledge: Ecological Resilience and the Structure of Scientific Revolutions 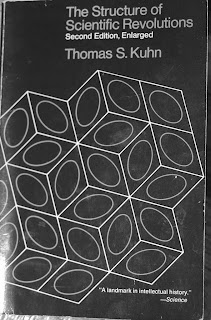 As students of science we have all, no doubt, absorbed the lessons from the history of our disciplines that changes in thinking tend not to be meted out incrementally. The Darwinian and Wallacean account of evolutionary change through natural selection did not merely supplement alternative, often supernatural, accounts of organic change through time. The idea was a revolutionary one – it turned the orthodoxies of the time on their heads and did so tumultuously and irrevocably (at least for those 40% or so of us who seem to accept evolutionary accounts). A revolution is rapid, and in the revolutionary moment one set of conceptual structures is replaced with another. After the revolution, the new structures may persist for a time – a period of “normal science” – even though, almost invariably, the data accumulated through the lens of new theories may not always be fully supportive of those newly ascendant theories. And as those cracks begin to show the Darwins and Wallaces of the world set to work and a whiff of revolution is in the air again

Familiar stuff all of this, I’m sure. Thomas Kuhn, the philosopher and historian of science, coined the term “paradigm” for those "universally recognized scientific achievements that, for a time, provide model problems and solutions for a community of researchers" and professors have employed that term tirelessly when words like “model” or “pattern” or “program” just seem too darned plain. In contrast with the “mop-up” work that is the business of “normal science” operating within a given scientific paradigm (and who wouldn’t get excited about mop-up jobs) Kuhn identified the manner in which rapid change in science is compressed into its major revolutionary events.

For now my interest is not merely in the ways in which Kuhnian analysis can be applied to ecology. Rather, I am curious about how Kuhn’s model of paradigms and revolutions not only assists in developing our explicit expectations of what revolutionary ecology makes possible, but also in how ecological thought can double back and influence the way in which we might think about the history of science in general. The revolution I have especially in mind, as I will elaborate below, is that associated with a resurgence of interest in ecological dynamics: ideas about the structure, function of ecological systems and the way these systems respond to disturbance. Ecologists are developing these conceptions at a level of generality that makes their models epistemologically relevant to phenomena as diverse as lakes, financial markets, and the history of science itself. So a paradigmatic shift relating to theories of change in ecology allows ecology to reflect on the nature of all paradigmatic shifts including its own ones. In this sense there is an ecology of knowledge, and ecologists therefore can benefit from collaboration with, and insight from, non-traditional partners in the humanities, in particular, with those that reflect on stability and change in systems not typically of interest to ecologists.  Kuhn is just one such anomalous partner.  In return, ecology may return the favor by exporting insights gleaned from the study of nature, making them available for the behavior of other complex systems.


Ecology as a discipline has had in its short history its own tempestuous changes, its revolutionary convulsions. Darwin’s theory was, of course, an ecological one – the struggle for existence is what gets ecologists up in the morning and the Darwinian revolution, therefore, is one we ecologists can claim as our own. Other than that though, ecological revolutions seems like bloodless coups compared to the emergence of Einsteinian mechanics, or Plate Tectonics, or even the demise of Phlogiston theory. Even so, it may be useful to regard such changes as revolutionary. Kuhn, in fact, seemed to have had in mind an extended conception of scientific revolutions, one that went beyond the roster of the usual suspects: the Copernican Revolution and those associated with Newton, Lavoisier, and Einstein.  When the structure of previously unrecognized revolutions is compared against those more spectacular ones it is clear that they all had implications for recognizing the “sorts of entities the universe does contain, but also by implication, those that it does not.”1 So the question for ecology is how do its larger conceptual shifts (let’s go ahead and call them revolutions) alter its conceptions of what counts for a meaningful entity in the world?

What are some of these ecological revolutions? In my lifetime there have been some profound shifts in ecological thinking that are relevant to the entities we might seek to manage. For instance, the older notion of a Balance of Nature has been set aside in favor of a now greater emphasis on instability, fluctuation, stochasticity, and disturbance. With this reconfiguration of emphasis, our thoughts about how best to conserve ecological systems and their components have changed. For example, managing fire as a disturbance for the purpose of maintaining the structure of rare biological communities is now a conservation priority whereas before excluding fire from “pristine” ecosystems had been the priority. What’s a good revolution without a fire!   Through the shift in an ecological paradigm, fire shows up, in some senses for the very first time, as an entity for ecology.  This is true at least in the sense that fire is now as seen as an entity operating within the normal workings of most ecosystems.

Though ecological revolutions are generally less splashy than say the Copernican one, nevertheless ecologists have gone one better than a big splash. Ecologists have created in Resilience Thinking a conceptual framework and a vocabulary that reframes stability and change in a way that can accommodate not only thinking of stability and change in scientific theories but also pretty much everything!

Resilience can be defined (and admittedly the terms has been defined in other ways by other ecologists) as the capacity of a system to absorb disturbance and still retain its normal structure and function. Or, to put it another way, resilience is the capacity to withstand disturbance without the normal state being tipped into a new one.  Resilience thinking is a species of a more general systems thinking. When one is satisfied that the problem entity of interest can be regarded as a system, that is, a whole consisting of several parts – a body, for example with its organs, tissues, and cells – there are ideas from the resilience tool box that may applicable. The sort of systems that resilience thinking is especially applied to, are so-called complex adaptive systems. Complex Adaptive Systems are those that, according to the Resilience Alliance (a multidisciplinary research group that explores the dynamics of complex social-ecological systems) possess “inherent uncertainty in their dynamics that tend to have multiple stable states and that exhibit self-organisation.”

In its most refined form, resilience thinking provides a way of examining social-ecological systems, that is, cities, ecological management units, anywhere, in fact, where one can recognize a unit comprised of people and the rest of nature.  Resilience thinking can be applied to the analysis of such systems in order to manage them and to preserve their ability to function in a desirable way and preventing them from crossing a threshold into a less desirable form.  Or, one can, arguably, apply resilience thinking to doing precisely the reverse.

Of the many key ideas that characterize the paradigm of resilience thinking two seems particularly interesting.  One is the recognition that change in systems is rarely continuous and linear; changes come about in many ecological systems episodically.  For instance, relatively clear lakes may remain stable for lengthy periods only to tip to a more turbid condition rapidly.  A forest may appear unaffected by a particular invasive species only to become rapidly encroached after a threshold has been, seemingly, breached.   Fires, flood, hurricanes, pest outbreaks can impose consequential changes to a system very rapidly indeed.  Another key idea, a companion piece to the first, is that once a system has crossed a threshold into a new “stable state” the changes may be irreversible.  There is no going home again!

Although resilience thinkers reserve their most sophisticated and explicit explanations for ecological case studies, the lay reader of resilience literature is invited to think about the application of resilience thinking to any system of interest of especial interest to them. Once you start to apply it to the complex systems around us it becomes hard to leave off. Stock markets: their booms and busts, friendships: their trial and tribulations; social movements: their development and their dissolutions; and scientific theories: their normal operation and their revolutionary moments! In fact it becomes hard not to see resilience and the crossing of thresholds everywhere. However, one must ask, perhaps impertinently, if a way of thinking about the workings of the world that covers pretty much everything, can, in fact, explain anything at all.

Resilience thinking can engulf Kuhn’s model of paradigms, normal science and revolution.  In one sense, theoretical and empirical changes in ecology may conform to the Kuhnian model, but in turn paradigm shifts seems to be just one of a general class of phenomena to which resilience thinking might be usefully applied.  For instance, the disturbance inflicted to normal science coming from a few uncanny results may not be paradigm shattering.  A resilient scientific theory persists despite a few congruous results.  But one can ask about the circumstances under which paradigm resilience is lowered and as a consequence that paradigm is liable to be swept away in a revolutionary second.

Let us return in conclusion to this short and incomplete piece to the nagging suspicion that resilience thinking is so sweeping that it permits us to do very little in particular.  This time one can turn back to Kuhn and remind ourselves of his observation that revolutions in science call our attention to certain fundamental entities that comprise the universe.  With this in mind, one must always ask, when we apply resilience thinking to phenomena as disparate as financial systems and forests, what new features of the system we are inspecting comes to light by virtue of resilience perspective we are employing.  If we merely achieve the goal of stuffing the phenomena into the conceptual box of resilience thinking, then we have achieved very little at all.

Posted by DublinSoil at 5:22 PM