Deep, Dark and Shameful: Morton and Jordan and Our Ecological Futures 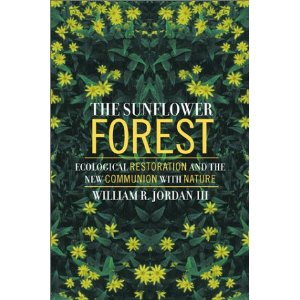 Over the coming weeks I will be re-reading books by two authors who have been important to me in recent years: William Jordan III's The Sunflower Forest: Ecological Restoration and the NewCommunion with Nature and his new Making Nature Whole: A History of Ecological Restoration, as well as Tim Morton's Ecology without Nature: Rethinking Environmental Aesthetics and The Ecological Thought.

In particular I am interested in the relationship between two terms in these books: "shame" in Bill Jordan's work and "dark" in Tim Morton's work.

Briefly, Bill regards the jettisoning of shame in contemporary culture (or the desire to avoid shame) as being problematic since it is through our grappling with shame that, arguably, we get to transcendent values such as beauty, meaning and community (in this he is drawing upon the work of critic Fred Turner).  Shame is differentiated in this account from guilt in as much as the former is not necessarily associated with wrongdoing.  Rather, shame is the painful awareness of limitation or shortcoming - existential shame as Bill qualifies it.  For instance, I personally feel the hot sting of shame twice each week in my French translation class, not because I have naughtily neglected my homework (when I do, I may feel guilty) but because my woeful facility with this language becomes publicly apparent.  Especially significant for Bill is that ecological restoration, unlike many other forms of ecological activity (or inactivity - i.e. environmental asceticism: see here or a shorter version here) provides an encounter with shame, or to put it as Bill does, it "implicates the restorationist in the universal scandal of creation [and] provides a context for achieving communion with creation."  To deal with shame then is to willfully tussle with the less seemly aspects of existence, rather than to ascetically disengage from the world with all it problematic aspects. 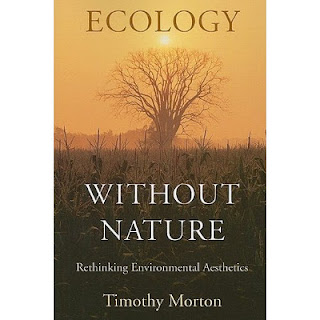 Tim's notion of "dark ecology", in a similar way to Bill's advocacy of a negotiation and commutation of shame into beauty, calls for us to stay with "a dying world" - and the world is always dying, and we are always dying.  "The problem", Tim says, "with human beingness...is the problem of what to do with one's slime (one's shit)."  One solution is to turn one's back on it scampering along to the pretty and austere; this is the gesture of "the beautiful soul".  Dark ecology would have use take a different route; Tim would have us "hold the slimy in view", we would "hang[.] out in the distance [which] may be the surest way of relating to the non-human."

It seems to me the both Bill and Tim are working through some similar issues, and doing so in ways that can be profitably examined conjointly.  Both avoid the sentimentality associated with much in contemporary environmental thought; in fact both are self-consciously, deliberately non-sentimental.   Both have suggestions concerning what we do now, what we face now.  And both provide a sense of what happens when one does something in this world. They both point to a developmental sequence, how things might unfold if we were to stay with Bill in the scandal of creation or if we jump into the mud with Tim.

The degree of overlap in thinking shameful or dark thoughts and the benefits of putting the shameful and the dark into conversation with one another is open question as far as I am concerned - my suspicion, of course, is that there is something useful here, but I intend to read these pretty slowly.

The other reason I am rereading these books is because I think they are teachable books, and students, undergraduate included, will benefit from them.  But the task of teaching them is perhaps not an easy one, and I'd like to generate conversation about this task.

So, if you were also interested in reading these books together between now and January I'd be interested in hearing from you, I would hope we'd benefit from the conversation..