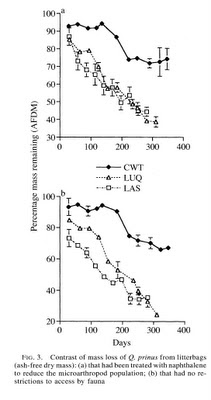 According to a recent Google scholar alert (emails I receive when others have found use in their work for my publications), a paper I wrote with a number of colleagues connected with the Institute of Ecology at University of Georgia over a decade ago has now been cited in other works more than a hundred time.  This is not a huge number of course (citation classics in ecology are cited thousands of time) but nonetheless it is gratifying.  A lot of work went into the paper, and it involved fun but sweaty times in Costa Rica, Puerto Rico, and the Southern Appalachians where I examined decomposition rates of leaf litter (there was one common substrate - Quercus prinus - across all sites).  I can measure out the cost of this paper in bot-flies in my flesh, but that's another story!

As far as I can tell when people want support from the literature to support the overwhelmingly obvious statement that decomposition rates are higher in the tropics than in the temperate zone they cite Heneghan et al 1999.  Another less obvious outcome of the work has rarely been discussed and that is the observation that in warmer and wetter parts of the world the influence of soil critters can becomes quite important in determining decomposition rates.  Small differences in the assemblage structure of soil biota at different sites can have an influence on decomposition rates and on the rate at which nutrients become available in the soil.  In the graph above the CWT site is a temperate one (Coweeta), that LUQ site is Luquillo Forest in Puerto Rico and the LAS is La Selva in Costa.  When soil microarthropods (mites, springtails, coneheads etc) were excluded there is a difference between the temperate and tropical sites in the rate of litter breakdown, but no difference between the two tropical sites (upper panel).  In the lower panel the soil critters had access to the litter and a fairly pronounced difference emerged between the two tropical sites (expressing the influence of unique soil faunal assemblages on each site).


This observation might have some interesting, and perhaps under-inspected, implications for determining the effects of climate change on soil processes.  In warmer soils, especially when moisture is not limiting, soil fauna can express a stronger influence on ecosystems than we have supposed (we already know that they have some influence).  When this observation is coupled with an observation that current restoration practice generally does not take soil biota (other than mycorrhiza) into account then the implications get even more profound for the future of these systems.  This needs to be more systematically investigated methinks.

The abstract of the paper is reproduced here:


This study examined the effect of soil microarthropods on the decomposition of a single substrate (Quercus prinus L.) at two humid tropical forests (La Selva, Costa Rica LAS, and Luquillo Experimental Forest, Puerto Rico LUQ) and one temperate forest (Coweeta Hydrologic Station, North Carolina, USA CWT). In this litterbag experiment, naphthalene was applied to reduce the microarthropod population density from half of three replicate plots established at each site. This enabled us to quantify the mass loss contributed by the fauna (MLCF) at each site and permitted an analysis of the influence of site-specific differences in the composition of the microarthropod assemblages on decomposition rates. We hypothesized that microarthropod regulation of the microbial populations involved in leaf litter decomposition would be stronger in humid tropical forests, which experience conditions of low climatic variability. In these conditions, there can be an enhanced degree of biotic interactions between microarthropods and their microbial food sources. The elevated extent of these interactions should be expressed as a greater influence of microarthropods at the tropical sites and could result in a site-specific effect of faunal assemblages on decomposition. Decomposition of the oak litter proceeded faster in Puerto Rican and Costa Rican forests than in a temperate forest in North Carolina, USA. Microarthropods had little effect on decomposition in the temperate forest, whereas their influence was pronounced at tropical sites. Mass loss of litter from plots with reduced microarthropod populations was similar at the tropical sites. When plots with intact faunal communities were compared, differences in the tropical sites were apparent, suggesting that there was a site-specific faunal contribution to decomposition at these sites. Oribatid mites constituted a dominant component (41-64%) at each of the sites. Species richness of oribatids and Fisher's alpha diversity were similar in each of the three sites. The Shannon index revealed a lower diversity at LUQ. Abundance of microarthropods was lowest at LAS. Species accumulation curves for each site, though similar in form, were distinctive, as were diversity accumulation patterns in samples of increasing size. There was a positive relationship between species richness and the contribution of the fauna to litter mass loss within each site. Thus, species diversity of decomposer fauna may have important ecosystem consequences, particularly in warm moist tropical forests.
http://www.esajournals.org/doi/full/10.189/0012-9658%281999%29080%5B1873:SMCTDD%5D2.0.CO;2

Posted by DublinSoil at 9:15 AM