The Environmental Monk In All of Us

I posted some of this before, but I am reading part of it at my UIC talk today so I thought I'd share if again. 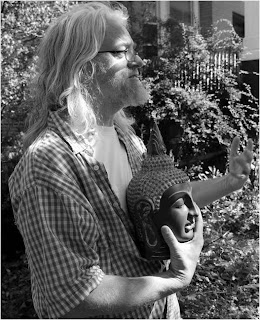 If asceticism was simply a matter of self-mortification then we could claim that we have never lived in more ascetic times.  We diet to shed those dozens and dozens of unsightly pounds; some voluntarily submit to a surgical ablating of the flesh for the purposes of fabricating the perfect nose; our star athletes allegedly undergo a period of sexual continence before the big game; some of you may even gallop on scorching days for distances in excess of twenty-six miles, for no better reason than to replicate the achievement of the first person to die from that feat.  And in general terms the definition of the ascetic as a person who practices “rigorous self-discipline, severe abstinence, austerity”, might tempt us to smuggle the more excessive of these modern deprivations under the definitional bar.  However, the OED qualifies the definition by pointing out that asceticism aims are achieved “by seclusion or by abstinence from creature comforts”.  Furthermore, the term derives etymologically from the Greek asketikos, meaning monk or hermit and more generally the root term is ascesis – the practice of self discipline, or exercise.  If, in the final analysis, the contemporary mortifications listed above seem to fall short of being ascetic, why might we, in contrast, regard environmentalism as fundamentally so?

To use the life of Simeon Stylites as a point of comparison with environmental thought and practice may be a challenging place to start to make a case that environmentalism is foundationally ascetic.  Certainly there are more temperate ascetics, ones who like St Antony of Egypt (231-356 AD) traveled to the wilds there to meditatively dally, but after decades alone returned to society, at least in the sense of taking many disciples under his care.  In other words, there are ascetics whose practice might be more appropriately compared to Thoreau’s sojourn at Walden Pond.  Perhaps one might compare tree-stylites like John Muir perched in a storm-tossed Douglas Spruce or Julia Butterfly Hill residing in her California Redwood to the ascetic sadhus of India, who, practicing what is called urdhamukhi, dangle out of trees.  In the case of Hill, she lasted two years; as for the Muir and the sadhus, the latter who dangle upside-down, their tree dwelling lasted a matter of hours.  And so on; one might look for a milder ascetic counterpart for Robinson Jeffers dyspepsia concerning his fellows, preferring you’ll recall, to “sooner, except the penalties, kill a man than a hawk”; one for Ed Abbey’s hilarious but curmudgeonly defense of  inaccessibility for Arches National Monument in Desert Solitaire; one for Paul Ehrlich’s discomfort in an ancient Indian taxi (“People visiting, arguing and screaming…. defecating and urinating”) prompting his writing of The Population Bomb; counterparts even for the simple-living needed for ecological footprint reduction, for the belt-tightening required by sustainability, and for the meat-eschewing dicta of environmental vegetarianism.  In all of these examples there is a whiff of asceticism but none requires the foot ulcerating commitment of standing on a pillar for decades.


…
Sustainability measures, fairly obviously, call (justly) for a deferment of pleasures right now, for an equitable world in the future; Paul Shepard and David Abram mourn the passing of the Pleistocene or indigenous worlds; nature-lovers almost everywhere incline towards inhospitable places; John Muir, Henry David Thoreau, Ed Abbey, Charles Darwin (even): all left though some returned to tend their flock; the mountains beckon to Gary Snyder, David Brower, and to Arne Næss; Garrett Hardin, Paul Ehrlich, and Bill McKibben all demand reproductive self-limitation; Rachel Carson, Terry Tempest Williams, and Al Gore are outraged by what our times have wrought; eight biosphereans spent two years in the bubble of Biosphere 2 (like Simeon they had their support "disciples"); Aldo Leopold and Martin Heidegger had a great fondness for the nostalgia of shack-dwelling.  And those not in shacks prefer, like Melville's mast-men, and Simeon, life en plein air - leave absolutely no one inside!

And I agree with them all, in many ways at least.  My point, and it seems curiously feeble to me to say it, is not that the ascetic impulse is always wrong, though most contemporary writers disapprove of the Simeon’s vigor, or that environmental thought is wrong when it tends towards asceticism (it certainly is not, but our priorities need to be refined).  Rather, I am interested in a more straightforward accounting of the motivations and the behavioral reflexes of environmentalism – where it is ascetic let us call it so; and when our ascetic impulses lead us astray let us reconsider.  At its worst the ascetic disposition of environmental thought has translated into calamitous action – for instance, inhumane population policies, unjust removal of peoples from their traditional lands.  Less tragically, but still detrimentally, the comfortableness of the environmentalists’ ascetic disposition coaxes the “eco-cete”, the everyday ecological monk, into an unbalanced preoccupation with conservation in wilderness areas, a neglect, until quite recently, of the city as a site for conservation, an often ruthless demarcation of the human from the wild, a nostalgia for worlds that have passed if they ever existed at all, a great nausea towards domesticated humanity – that is, most of us,  an over-confidence in an expert knowledge of the natural world, a puzzling relationship with technology, and finally (for now) a snooty distain of those who cannot articulate the environmental convictions in the professional lingo of the movement.

The argument is more fully developed here.
Posted by DublinSoil at 12:07 PM

Email ThisBlogThis!Share to TwitterShare to FacebookShare to Pinterest
Labels: asceticism