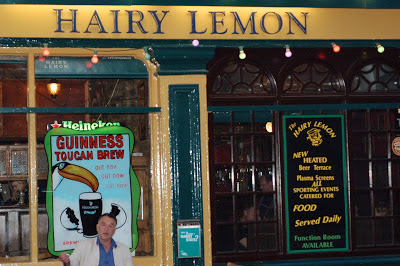 A few years ago when I was back in Dublin, visiting home from Chicago, I got into a mild altercation with an inebriate outside the Hairy Lemon pub on Stephen St. I was taking a photograph of the pub sign, being curious at the time about the large number of establishments in Dublin whose names referred to nature. The Stag’s Head, Cock Tavern, Red Parrot, Cat and Cage, The Greyhound Inn, The Swan Bar, The Bleeding Horse, The Boar’s Head, and so on. The drunk roused from the clumsy enjoyment of a cigarette, lurched towards me and asked, charmingly enough at first, if I was a CIA informant. I am not. Our conversation quickly descended into a request for royalty payments for the use of his image, a short sermon from him on trust, and then unpleasant accusations were made about how “yanks never pay for what they take”. I assured him I was not from the US. He looked me up and down a moment. I was wearing shorts, tee-shirt,and Birkenstock's — the international symbol of rootlessness — and had a Nikon on my shoulder. “Fooking Canadian,” he exclaimed.

I was a tourist in my hometown.

One metric of the geographical complexity of the age we are living in is how long it takes to answer the simple question: Where are you from? For years I would reply, quite simply, that I am from Dublin. Now I notice that I say I am “originally from Dublin” and then mutter something about having lived in Georgia for four years and have been in the Midwest for over a decade. The codicil communicates, I think, that if I am being honest I have been shaped by my long years in the United States, and that I do not quite belong in Ireland any more. More complex still is the case for my sons. One is born in Dublin, the other in Athens, Georgia. They have lived in Evanston, Illinois for longer than anywhere else. Where are they from? How long does it take them to explain?

In 2004 famed humanist geographer Yi-Fu Tuan was invited to talk to an international architecture conference in China. He had not returned to China since he left in 1941 at age ten. He is currently residing in Madison, Wisconsin. The invitation raised questions for him about where he was really from. “I have doubts”, he conceded, “about my identity and where I truly belong." Though he was accustomed, he said, to deflecting questions about his real home by claiming that he was from Earth, he recognized these interrogations about geographical origins are really about our deepest attachments, about where one is most comfortable. Compounding Tuan’s problem about his identity was the poor state of his spoken Chinese. He would have to deliver his talk in English with a translator. As a humanist, language is Tuan’s “working tool” — he should be at home in language. He felt ashamed of his deficits.

Nonetheless, Tuan decided to take the trip to China. His book “Coming home to China”, is an excellent meditation on the joys and perils of home-coming.

Yi-Fu Tuan has a sensitive gut - a gut that quarreled with his return to China. He found it hard to get used to the food of his native land. In one of his first culinary outings he ordered “Water-boiled fish”, a local Beijing delicacy and was revolted by it. A live fish which he had so recently selected from a tank was “dealt frenzied blows” and quickly ended up floating as fleshy chunks on top of his soup. Adding to his problems, the toilets smelled! He wondered why the Chinese didn’t make a greater effort to cosmeticize sanitary life, speculating that the Chinese associated the smell of manure with farmlands and consequently with fertility. In contrast, he claimed that “Americans chose to repress all evidence of decay and death.”

Tuan reported moments where his incomprehension of the culture and language became especially acute. A young journalist interviewed him and he can’t understand the questions. He gloomily reflected that he is “an illiterate old man.”

Despite his trepidations, and his missteps, he finds, however, that he has retained an unsuspected Chinese core. He enjoyed the solicitousness of his guide, her familiarity, and her constant reference to his old age. The Chinese crowd at his lectures are unfazed by his poor Chinese. He was, he reflected, “a Chinese who was not quite Chinese, an establishment figure yet also a maverick.” It was as if ambiguities in his national identity had been reproduced in his scholarly vocation.

In a number of places, Tuan’s lecture material, which is reproduced helpfully in the book, illuminates, albeit indirectly, the mechanisms involved in leaving and returning. Places, he explained, are not merely seen but engage all the senses. Tuan refers to this broader engagement with place as the felt environment. In synesthesia, for example, the senses blend together so that, for example, when one hears and sound one also sees a color. Though the condition is pronounced in some people, most of us can appreciate it in a milder form when we refer, for instance, to a shirt being “loud”. Synesthesia, Tuan claimed, is strongest in children and it links them to their environment, to the world’s objects that surround them. But as language fluency develops synesthesia weakens. One might argue from this that the home of one’s youth, China in Tuan’s case, must retain a special grip upon a person. Language, after all, can be deployed placelessly, whereas the development of a felt environment is rooted in local objects. A child’s is more open to her local place than an adult whose sensory skills are “dulled by routine and the chores of practicality.”

At the end of the trip Tuan confessed that his return to China has not, in fact, helped him with the personal question of where he belongs. In fact by “stirring hopes and longing that should perhaps be left in the bottom drawer of [his] psyche” he thinks it may have hindered him. However, there is a more impersonal level to the question of identity that cannot be dismissed. Chinese cultural attributes of respect for the elderly, the silent appreciation of collective activity - tai-chi in the park, seem enduring. Belonging is a matter of history, geography, and language. These provide an intimate bond with a place. This “triune” of history, geography, and language defines a sense of self, both collectively and individually. Ultimately who is Yi-Fu Tuan? He is “a citizen of the United States, a native of China, and a human being without firm anchorage in history, geography, and language.”

Those of us who live far from our native lands — is that not these days, most of us? — must reconcile ourselves to a hyphenated life. My father who has lived in Dublin for almost eighty years, uncomplicatedly says he’s from Tralee in Co Kerry. Yet my brother Padraic, born in Dublin, tells me that he sometimes says he’s from Chicago. My eldest son, Fiacha, born in Dublin, tells me that his response to the question of where he’s from, depends upon who asking the question. Yi-Fu Tuan’s subtle examination of this question of belongingness highlights that we must settle for ambiguities and more importantly find ways of re-locating in our new places. We are children no more, but we must find a child’s resources for connecting with place.
Posted by DublinSoil at 10:47 AM