Restoration as a key strategy for Green Infrastructure Planning in Chicago 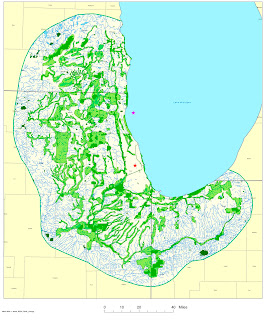 The role of green infrastructure in facilitating energy flows and material exchanges that sustain human habitation in urban regions is becoming more apparent and its importance for long term urban planning is being increasingly recognized. Open space planning (i.e., parks, wildlife corridors, urban forests) has long been on the agenda of urban designers. In contrast, green infrastructure serves as a way of framing discussions about the future of the city so that green spaces in are presented alongside engineered structures (i.e., roads, bridges, sewers) in urban areas so both can be simultaneously regarded as providing vital environmental services.

Green infrastructure gives metropolitan planners and engineers a greater range of tools for mitigating urban problems. Additionally, if more extensive green space is planned and protected in metropolitan areas then this increases the opportunities for biodiversity conservation. Thus, green infrastructure combines several seemingly disparate environmental strategies such as increasing ecosystems services, enhancing biodiversity conservation, and bringing a landscape ecological perspective to the management of urban regions where open space is no longer considered as isolated fragments.

We provide a definition for green infrastructure as this is a relatively new term and is used inconsistently. However, we demonstrate the usefulness of the term “green infrastructure” as a way of integrating several aspects of an urban ecological strategy. In particular, we argue that restoration is a critical tactic in achieving functional green infrastructure in large metropolitan areas where degraded ecosystems are often assailed by multiple stressors. We illustrate progress made in the Chicago area in developing a green infrastructure vision, and suggest a number of key knowledge gaps, attention to which may increase our ability to translate this vision into a reality.

Green Infrastructure Defined
We define green infrastructure as the ecological features of a human settlement that may be considered alongside traditional engineered infrastructure to enhance ecological values and functions. Usually green infrastructure is deployed for the benefit of the resident human populations although in the cases of natural areas conservation the supposed benefit for people may be an indirect one. This broad definition captures the range of uses to which the term has been applied, from those structures and processes that augment urban storm flow systems (Anon. 2008) to interconnected natural areas that contribute to human welfare (Benedict and McMahon 2006). Green infrastructure builds on previous work on ecosystems services, urban natural capital evaluation, and open space protection by integrating these insights explicitly into landuse planning in partnership with others involved in urban planning.

Since much open space in urban areas is currently either low diversity turf grass or degraded semi-natural land, restoration may be a key ingredient in increasing the ecological functioning of this land where the potential of this land to serve as green infrastructure is recognized and thus has been incorporated into urban planning. In order to provide a city with services required to augment, and in some cases replace, elements of gray infrastructure, the rehabilitation or restoration of open space will often be required. Green Infrastructure Planning in Chicago


We discuss three plans for enhancing green infrastructure in the Chicago region. The plan entitled “Adding Green to Urban Design” is one adopted by the City Plan Commission in November 2008. This plan considers green design solutions for exterior elements of the city (building exteriors to roadways) and is primarily focused on core metropolitan areas. The second is the “Chicago Nature and Wildlife Plan” prepared by the Department of Planning and Development and the Mayor's Nature and Wildlife Committee. The plan identifies in its Chicago Nature Area Directory about 19 km2 of natural or semi-natural habitat in the city, and indicated the approaches needed to enhance their wildlife value. The third plan is the Chicago Wilderness Green Infrastructure Vision. This vision is focused on the entire Chicago Wilderness region that encompasses southern Wisconsin, northern Illinois, northwestern Indiana, and southwestern Michigan. The three plans collectively can be seen as a comprehensive and integrated green infrastructure plan for Chicago and its hinterlands.  Ecological restoration is an increasingly prominent tactic endorsed in the plans as one migrates from the city core to the exterior. Ecological restoration is not mentioned in bringing green solutions to the urban cores, but is an important technique in the Wildlife Plan and in the Chicago Wilderness Green Infrastructure Vision.

Adding Green to Urban Design
“Adding Green to Urban Design” is a plan addressing three questions. Why have a plan? What needs to be done? How can the plan be implemented? Green urban design is advocated as the central tool to augmenting the considerable environmental advantages of compact, mixed-use, dense urban living. By building on the compactness and density of Chicago’s city form green design can contribute to the enhancement of quality of life and mitigate some of the consequences of impending climate change. Chicago can legitimately claim leadership in green design with its well supported urban forestry program, more than 250 buildings with “green” roofs, and with Chicago River sufficiently improved in water quality to sustain 60 fish species. The plan recommends building on these successes with four approaches: design and maintenance directed at ensuring sustainability and environmental function; promoting design responsive to neighborhood context; testing, evaluating and expanding used of green technologies; and promoting an understanding of the rationale for and outcomes from green design among all relevant stakeholders. In each of four categories water, air, land, and quality of life the plan explicates existing problems and elucidates the green solutions. The intended outcomes are as follows: 1) for water – capture and use precipitation and encourage water conservation; 2) for air – improve air quality; 3) for land – preserve and expand the quality and function of vegetated surfaces; 4) for quality of life – improve safety and public health and engage people in the outdoor environment. The responsible parties and a time line for achieving the outcomes are identified for each of the twenty-one key actions listed in the plan.

Chicago Nature and Wildlife Plan
Chicago’s Department of Planning and Development estimated that about 2.5% of the city’s land can be regarded as wildlife habitat. These habitat areas are distributed across 97 sites and contain representatives of most of the major regional habitat types. These natural areas are especially suited in providing opportunities for bird conservation. Yellow-headed black birds and black crowned night herons nest in the area, an improved habitat may boost their population numbers and assist in reversing the declines  of other rare species. Chicago is also a significant stop-over on the migratory routes of many bird species with about 7 million birds from 300 species migrating through the city every year. The objective of the Nature and Wildlife plan is to: 1) protect natural habitat; 2) manage existing open spaces; 3) monitor sites and compile research; and 4) educate the public.

The commitment to management of degraded city habitat in order to enhance the potential for biodiversity translates into an aspiration to implement existing management plans for the largest, high quality natural terrestrial areas. Similarly, the extension of successful wetland restoration strategies city-wide is advocated, along with the endorsement of an array of restoration-oriented and biodiversity-friendly practices.

Chicago Wilderness Green Infrastructure Vision
The objective in developing Chicago Wilderness Green Infrastructure Vision (GIV) was to map existing green infrastructure and to identify opportunities to expand this system and connect fragmented sites. The GIV builds upon the Chicago Wilderness Biodiversity Recovery Plan. Because the GIV project resulted in the production of a series of regional maps it can be viewed as way of extending the utility of the recovery plan by making it visually accessible and arresting. Because the vision is regional in scope and identifies several substantial “resource protection areas”, the GIV integrates and endorses ongoing local efforts and aggregates them in a way that underscores the case for landscape level biodiversity planning.

Importantly, the GIV is not an acquisition plan, nor does it dictate conservation designs for individual sites. However, the GIV does identify useful protection techniques that can be deployed at a site scale, such as conservation easements, greenway connections, conservation development, and ecological restoration. Acquisition and conservation easements are effective ways of recruiting land into regional green infrastructure. Greenway connection is also identified as important for enhancing biodiversity value. Conservation development is a key to managing the urban/suburban context in which these protection areas are located. Finally ecological restoration is seen as a critical tool for enhancing the long-term health of the resource protection areas. This emphasis of restoration as critical management tool is consistent with the long term goal of the Biodiversity Recovery Plan. The GIV is primarily focused on enhancing biodiversity. The definition of green infrastructure used in that project is a relatively narrow one where it is regarded as the “interconnecting network of lands and water that provides habitat for diverse communities of native flora and fauna at the regional scale”. Furthermore this definition of green infrastructure also includes areas adjacent to and connecting these remnant natural communities that provide buffers andopportunities for ecosystem restoration.

It is especially striking that the development principals enunciated by the GIV are consistent with green infrastructure strategies that might be undertaken merely to enhance ecosystem services. For instance, the overall goal is to promote development that protects and improves the natural environment. Twenty-five development principles are provided and recommend practices such as natural drainage, stormwater retention, natural landscaping, and riparian buffers. Conservation development throughout the area can be endorsed on the grounds that it costs less than traditional development and enhances property values, ecosystems services, and quality of life.

Concluding thoughts
Green infrastructure is a term that unites discourse of the pragmatic business of addressing the major challenges of providing for the health and welfare of urban dwellers with the traditionally more ethically and aesthetically matters of maintaining biodiversity in urban areas. Restoration is a vital tool for the “Chicago Nature and Wildlife Plan” and the “Chicago Wilderness Green Infrastructure Vision”, whereas novel green design is advocated by the “Adding Green to Urban Design Plan”. We believe these three plans bring together elements of what can be regarded as a green infrastructure for the entire region. Looking at these three separate initiatives in this way allows the links and synergies between the plans to be highlighted and built on. For example, green design solutions are vitally important for regulating storm flows and the protection of green space is also an important strategy in this regard as is the protection of wetland ecosystems in the region as a whole. Additionally, as metropolitan areas expand providing space for biodiversity in the city core using green roofs or similar techniques, providing natural areas within the city and larger habitat blocks around the city in its hinterland are all a necessary part of a comprehensive approach to maintaining biodiversity into the future. A major question in the integration of these plans to provide a comprehensive regional green infrastructure plan will depend on the degree to which green infrastructure designed with habitat quality in mind is synergistic with green infrastructure designed to directly enhance ecosystem services. Another way of asking the question is that “can restoration or rehabilitation techniques simultaneously maximize ecosystem services and maximize the outcome for traditional species conservation programs?” If there are few trade-off between these two objectives the future may be bright for urban areas.

Acknowledgements
We thank Aaron Durnbaugh, Deputy Commissioner of Environment, Chicago, for cogent remarks on a draft on this article.

This originally appeared in Restoration News Midwest Vol 2, Iss 1 (2009)
Posted by DublinSoil at 8:21 AM