Should We Care about the Conservation and Restoration of Decomposer Assemblages? 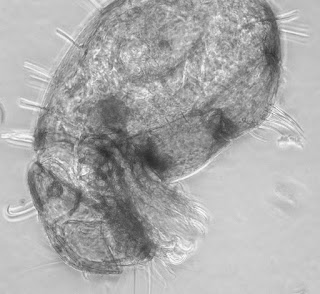 
By this, I mean to imply that an adequate study of soil ecology calls for interdisciplinarity on a scale that we are not especially good at.  That being said, the fact that dead things provide a foundation for these complex foodwebs has been enough for them to be functionally lumped together despite their multifarious attributes.  For the purpose of examining the fate of detritus this makes good sense.  Collectively the action of detrital-based foodwebs results in the breakdown of dead organic matter and the mineralization of organic compounds making them key nutrient available to the living.

Restorationists need to pay attention to soil organisms both because they are a very large component of the diversity of most sites, and because the regulation of nutrient availability exerts a large influence on the diversity of plants and other components of the biotic community.  We all live in the shadow of the kingdom of decay.  Concern for the conservation of soil communities is made all the more urgent because soils are vastly affected by global change.  A warmer earth implies generally more rapid decomposition rates (when other factors such as moisture content of the soil remain constant).  Invasive species can also have dramatic implications for soils, either directly when soil animals (earthworms and isopods, for instance) are moved around, or indirectly when plants invade.


Over the last couple of years my lab has initiated investigations on the diversity of soil organisms and their functional significance in the context of restoration efforts.  We are addressing these questions in projects designed to conserve biodiversity in and around Chicago.  These sites are heir to the typical problems associated with openspace in a major metropolitan setting – highly disturbed, heavily invaded, eutrophied, and fragmented.  I am especially interested in learning how our current best restoration management practices influence the composition of these belowground communities and, assuming such practices are altering these communities, what are the implications for the ecosystem processes over which soil critters exert some control.

There is widespread agreement that much of the diversity of soil groups is functionally redundant.  That is, the rates of decomposition and nutrient cycling may be buffered from the loss of some (perhaps much) of this biodiversity.  As long as key ecosystem processes remain intact does it matter if we observe that those restoration practices beneficial for other target taxa – plant or birds, for instance – are negatively affecting soil organism diversity?  I don’t want to exaggerate the differences between restoration conducted for the sake of nature itself or restoring for the continued provisioning of ecosystem services since oftentimes these motivations will produce convergent results when implemented.  But as we learn more about the diversity of belowground communities we will most likely face difficult trade-offs.  Can we modify restoration practices in order to enhance the diversity of organism above and below ground?  If we cannot, what diversity matters most?  Plants, birds, butterflies, mites, springtails, protozoa.  I am betting that some of these taxonomic groups are more equal than other.

An extended version of this will appear in Restoration News Midwest if Rocky Smiley accepts it!