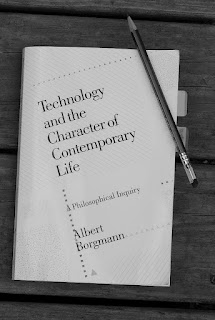 Now, this is all well and good but what accounts for the unsettling feeling that some of us share that Facebook and other social networking tools are not providing all the required vitamins of friendship.  The concern that, in fact, Facebook is just one of the innumerable fetishistic things we do to distract ourselves from harder task of cultivating our best capabilities.  Glancing back at the older technology of spoken language one recalls that a person can become a skilled orator, but can using Facebook become a source of a unique human excellence?  Perhaps excellence in Facebooking is displayed by a correct ratio of likes to comments? Or the appropriate comic timing of status updating?  Or is the concern the opposite one: is Facebook worrisome precisely because it makes something like friendship too easy, too readily and conveniently available?  That is, rather than not being good enough at replicating friendship has it, rather, become too good?

Furthermore, has Facebook commodified friendship? The price we pay is not only in the cash-investment for the supporting technologies required to service one’s account but also in the faith-investment entailed in going down the virtual friendship rabbit-hole.

A helpful way to frame the issue of Facebook’s ability to seemingly add and subtract from friendship simultaneously is by means of Albert Borgmann’s “device paradigm” [1].  In his classic critique of modern technology, Technology and the Character of Contemporary Life Borgmann investigates a “debilitating tendency” of our modern technological lives, which is the manner in which technology makes promises and subsequently erodes the quality of life in attempting to make good on its promises.  Technology, Borgmann says, promises to place nature and culture under our control and does so by means of devices that make goods and services effortlessly available to us. The characteristic feature of devices is that they perform their tasks immediately, and without making much in the way of demand upon us in return.  Emblematic devices for Borgmann include television sets, automobiles and so forth.  Facebook and other social media tools seem to fit the bill (though there is some squabbling it seems in the secondary literature about what counts as a device and what does not, and I shall revisit the point in a future post).  My point is that Facebook makes our friends available to us whenever we choose.  Space and time all but disappear. Thus I can conjure up my pals over my morning tea, or on my phone on my commute.  It’s easy, ubiquitous, effortless.

So, why might any of this be a problem?

The problem is that the device supplants a richer engagement with things.  To use one of Borgmann’s own examples when a wood-burning stove is replaced by heat supplied by a coal-fired central plant and piped into our homes a rich involvement with the world of the thing is lost.  The stove is more than a mere appliance – it provides a focus for the home, a hearth. To select and chop the wood and to learn the knack of lighting and maintaining the stove requires a social engagement than one does not get by flipping a switch.  The family gathers around it.  Facebook, in terms of this model, by making friends appear at the flick of a switch, and in reducing social civilities to activating “like” buttons unburdens us of many of the responsibilities of friendship.  I imagine that I have traveled less to Ireland to see my parents and siblings because I they remain available to me on Facebook and Skype.  But their instant availability comes at the cost of a flattening.  A poke from a friend on Facebook has never been, I suspect, as gratifying as an embrace in the flesh.  Gone also is the satisfaction of arriving at the journey’s end – the door opening, the invitation into the home.

Now most people maintain a mixed strategy: inter-mingling the virtual and the physical aspects of their friendships.  I have coined the term phriendships to refer to those intimate relationships that call primarily for real-world physical encounters[i].  But perhaps even the best of phriendships becomes a little deracinated by the virtual.  When you finally get together the process of catching is now a little diluted.  That trimmed beard no longer a surprise, nor are the graying temples, the chronicles of births, deaths, entertainments and misfortunes have already been shared.  There is simply less work to do – when we next meet up the routine tasks of friendship have been attended to in tiny byte-sized pieces.

The suggestion that technology overwhelms by successfully unburdening us seems on the face of it ungrateful.  After all crafting a critique of technology requires the time and leisure for reflection that one might argue is the fruit of technology.  This whole enterprise appears nostalgic, does it not?  A hankering after tougher times when a man knew how to hew wood.   But it is not the case that Borgmann would send us all to the lumberyard or back to a smoky kitchen.  He calls our attention to that which devices replace – what he calls focal practices.  By focal practices he refers to activities surrounding those events in our lives where the means and end are more in concert.  Preparing a festive meal for the family, a walk in the wilds, even trout fishing…where one does not especially value being disburdened of the associated task.  Where cooking from scratch has its own rewards even when microwaving a tasty treat is a possibility.  The cultivation of focal practices is proposed as a means of resisting the device paradigm.  It is hard in a paragraph to do justice to the richness of Borgmann’s treatment so I will defer a more detailed treatment.

Even from the perspective of Borgmann’s analysis Facebook is clearly not a device in the way that a nuclear power plant, or a toaster oven for that matter, is.  We presumably use Facebook as a means incorporating friends into our daily life and that seems like a splendid thing.  Though Facebook may yield to shabby commodification, nonetheless it does not mean that we all become commercial pals.  In fact, since we can experience all of Aristotle modes of friendship online, though friendship of the most virtuous kind are perhaps less successfully achieved.  On the other hand, Facebook though purporting to connect us to friends is nonetheless, like other onanisitic practices, a solitary practice.  It is unlikely that it will satisfy us in a way that delivers intimacy in all its potentialities.  And the degree to which the enthrallment of our online lives precludes such small felicities as running into old friends on a trip back home is that which makes us virtually suspicious.

[i] Phriendship:a physical supplement to a Facebook friendship where one gets off one's arse and goes to see someone.
Posted by DublinSoil at 12:09 PM