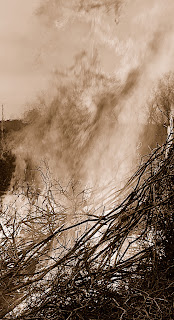 These are some thoughts on the results so far of work our group is doing on understanding governance structures surrounding ecological restoration in the Chicago Region.

Recently, I have been reading excerpts on the natural history of the Chicago Wilderness region recorded during the 19th Century as collated in Joel Greenberg’s excellent volume Of Prairie, Woods, and Water: Two Centuries of Chicago Nature Writing (2008).

One piece that especially caught my attention is Colonel Colbee Chamberlain Benton’s A Visitor to Chicago in the Indian Days: Journal of the Far-Off West.  There Benton described a trip that he and Louis Ouilmette, a young man of French and Potawatomi heritage, embarked upon from Chicago on August 19th 1833.  They left the infant city to inform local Indian tribes that their federal annuities would be paid in September of that year. On the night of August 24th the pair of travelers passed through some oak groves and arrived at a small stream in a little prairie in Southeast Wisconsin and they camped there for the night.  As night fell they heard Indians around their camp.  Benton hid beside a large tree and at Ouilmette’s suggestion he removed his straw hat since it was “a good mark to shoot at.”  Assessing the danger they found themselves in, Louis remarked that “there were occasionally some of the Sauks and Fox Indians wandering about in [that] part of the country, and from them [they] could not expect much mercy.”  Benton could not sleep.  Not necessarily because of the danger.  Rather, because of the noise!  Some of the noise certainly may have emanated from the Indians who “mocked almost every wild animal.”  But also there were unfamiliar birds calling, as well as foxes and raccoons.  In the distance, wolves howled and the owls hooted in concert with the wolves.  The mosquitoes added their part to “the music”.  A sleepless, noisy, vaguely threatening night, and yet Benton declared that never before had he “passed a night so interestingly and so pleasantly…”

Though some might conclude that what Benton and Ouilmette experienced was the Chicago Wilderness against which present times seem lusterless, species poor, and silent.  And though some of that may be so, nonetheless we know better to conclude it was nature pure and simple.  It was, of course, a social ecological system, one that at the time of the trip had been in place for centuries.  In those times it was the society of Native Americans being shaped by, and in turn shaping, the natural systems surrounding them.  By a social-ecological system we mean a system in which humans and non-human life forms are found in a spatiotemporally defined environment.  Moreover, the term is not simple an expansion of the ecological community concept to include humans which is a relatively easy matter.  Rather, SES’s include more of the mental tackle of humans in it; not the biophysical interactions merely.  Humans’ conception of nature, our consciousness of it, our desire to change it or leave it alone, for example; the human institutions that govern nature and the way in which nature influences human health and sensibilities are part of the social ecological system. These mental attributes are less easy to accommodate in our ecological theories than our trophic ecology for instance.

Ecologists are accustomed to thinking about parts and wholes.  The way in which the aggregation of components contribute to higher level structures – organisms, populations, communities, variegated landscapes, biomes, Gaia etc is theorized under the rubric of Hierarchy Theory or Systems Thinking.  Now we know it does perhaps a little injury to suggest that in this theoretical approach we can separate out a particular level in the hierarchy and analyze the level discretely, as if the other levels do not exist.  That being said, this is the basis for the subdisciplines of ecology: autecology, population ecology, community ecology etc.  But since each one of these subdisciplines derives from humans’ conception and abstraction of nature, the subdiscipline of ecology dealing with the integration of human mental processes into ecology has some sort of confusing meta-status.  Social-ecological systems research, in a sense, founds all ecology; that is, all ecology is already a type of under-inspected social-ecological systems ecology to begin with.  Our conception of nature and our recognition of the different ways of teasing apart the pieces of an ecological system to make them tractable for analysis can plausibly be done for everything except for the very mental processes decomposing the system, those very processes that represent the very “stuff” of social ecological research.

Now, ecologists are not the only ones interested in theories of wholes and parts.  Such a theory is at the cornerstone of phenomenology, a central movement in 20th C continental philosophy.  This is provided by Edmund Husserl (1859 1938) as the third of his six Logical Investigations.  We don’t need to detain ourselves long with this (though the entire Logical Investigation may detain you for a considerable period – in fact, reading it is like striking yourself repeatedly with a dull mallet).  But let us just note that Husserl makes a distinction, one that ecologists don’t, between parts of wholes with quite unique properties.  Those parts that can be analyzed separately from the whole to which it belongs he calls pieces (populations, communities, tree branches, a horse’s head (ask me later!) and those parts that cannot be so analyzed.  He calls the latter part “moments”.  The color of a branch is a moment rather than a piece since it cannot be separated from the branch of which it is a whole.  Let skip ahead quite a bit and suggest there are several problems in science and philosophy that are exacerbated by confusing these distinct notions of parts. The notion of mind, the ecologically novel element in social-ecological ecology is not a “piece” clearly; it is a “moment”.  It can neither be extracted nor added to our analysis like adding an orange into a barrel full of apples.  The orange is always already in the apple barrel.

It is perhaps not a surprise, then, that social ecological systems research has been difficult, slow.  We are used to working with “parts” and now we must address “moments”.  In our work exploring the ways in which variation in governance systems influences biodiversity and how biodiversity outcomes in turn influence our response to nature we are, in fact, doing something a little easier than putting the whole structure of consciousness back in the picture.  We are not looking for a pure science of essences as Husserl was.  Our problems at the moment are the pragmatic one of determining how two data sets should be analyzed together.  Environmental social science and ecology have developed as disciplines in response to the way in which we have broken down human-nature connections for the purposes of empirical investigations.  Surveys, sophisticated qualitative analysis of interview data, elucidation of rules, worm surveys, vegetation analyses, mite ordination are the ingredients but reassembling this particular Humpty Dumpty into a whole egg will be difficult.  But I am working with the finest of the king’s horses and the best of the king’s men.

Posted by DublinSoil at 4:06 PM