Why are the implications of ecological restoration on microarthropod diversity important to understand?

Soil organisms are phylogenetically diverse, trophically heterogeneous, functionally variable, assorted in size, dissimilar in longevity, variegated in morphology, adapted to different soil horizons, but united in their reliance upon death.  That is, soil organisms are similar in that their foodwebs rely upon the processing of detritus – leaf litter, coarse woody debris, the carcasses of dead animals and so forth (Coleman et al. 2004).  Collectively the action of organisms within detrital-based food webs results in the breakdown of dead organic matter and the mineralization of organic compounds making key nutrients available to the living (Swift et al. 1979).

To illustrate the enormous diversity of soil organisms, I recently calculated that in a typical walk along an Illinois woodland path each and every foot fall lands upon the bodies of 270,000 protozoa, 135 mites, 3 springtails, and one or so large earthworms (Heneghan 2011).  These are representative of 30 soil species of which up to half may be previously undescribed by taxonomists!  Scaled up there can be at least 200 species of soil insects and 1000 species of soil animals in every 1 m2 of soil. The calculation is based upon an extensive review of soil biodiversity (Giller 1996) 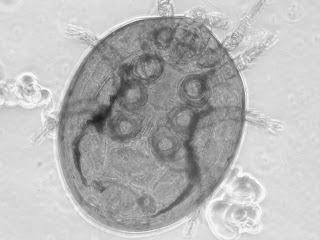 Since the soil fauna are a major contributor to the diversity of many sites of conservation interest it might be expected that projects targeted at biodiversity conservation would include a consideration of these organisms.  However ecological restoration, that branch of environmental management devoted to the rehabilitating of degraded habitat, has paid scant attention to soil organisms (Callaham et al. 2008, Heneghan et al. 2008).  This gap in knowledge and practice is significant because soil organisms are a very large component of the biological diversity at many sites and because the regulation of nutrient availability exerts a large influence on the diversity in plant communities which in turn influences the diversity of animal species including belowground ones (Anderson 1975, Lussenhop 1992, Coleman and Whitman 2005).

Concern for the conservation and restoration of decomposers and soil communities is made more urgent because soils are vastly affected by global change (the interrelated problems of climate change, nitrogen pollution, invasive species introduction and so forth).  Invasive species in particular can have dramatic implications for soils, either directly when soil animals (e.g. earthworms and isopods) are introduced into a site or indirectly when plants invade (Wolfe and Klironomos 2005, Heneghan et al. 2006, Heneghan et al. 2012).  Modification of plant communities result in altered assemblages within the soil, and these in turn will have implications for ecosystem processes that can determine the successional trajectories of plant communities.

Posted by DublinSoil at 5:46 PM