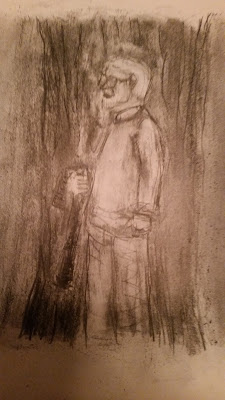 The Da clocking up some impressive birthday numbers today. An eccentric, entertaining, and very mildly irrasible man. Indefatigable too.

A good naturalist in his day - very fine knowledge of the Mollusca. And, by the way, a commendable writer. Also a dab-hand with the ole paint brush back in the last century. Pretty good story-teller, I should mention. A compassionate fellow, by the by. A person of solid and inspiring faith now that I'm at it. Not afraid to call out bullshit, for that matter, which got him denounced by the old Monsignor from the pulpit. Did I mention that he laughs till he cries at certain things?

Supportive fellow to his kids. I once woke him up in the middle of the night because a friend who was descending into madness needed to be chauffeured home. Not a fecking bother on him.

Loves the mother, Goddamn but that man loves that woman. I
n his own way, I suppose, though I once saw him slip his arm around her waist in the kitchen when he thought that we, their truckload of kids, weren't watching. Kissed her softly. Has a great fondness for apples, and highly critical of contemporary developments in apple husbandry. Anyway, it's that fellow's birthday.
Posted by DublinSoil at 9:34 AM