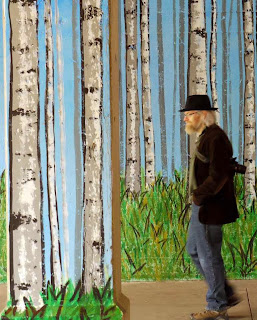 In 1902 Robert Lloyd Praeger, the prolific Irish naturalist, recorded a new occurrence of the rare grass Milium effusum (wood millet) in Dublin. He discovered it in Bushy Park, which was adjacent to his home on Zion Road in Rathgar, a few miles south of the city center. This was the park where more than seventy years later I played as a child, being a five-minute walk from my childhood home. It is the park that I visit every time I return to Dublin.

In Ireland, Praeger is associated with the botanical investigation of that country’s wildest places. Less attention has been paid to Praeger as a proto-urban ecologist: a naturalist who spent most of his life in the city, who wrote extensively about his garden, and who devoted a chapter of his most renowned book, The Way That I Went, An Irishman in Ireland (1937), to Dublin and its environs. He wrote there on the famous wagtail roosts in O’Connell Street, the ferns on Dublin walls, and the plants on North Bull Island, a coastal conservation area in Dublin bay. He and a small team also surveyed and wrote extensively on Lambay Island a couple of miles off the coast, north of the city.

In addition to his urban interests, what appeals to me about Praeger is that though in many ways he was a fairly traditional natural historian whose extensive writings—in all there were 800 papers and twenty-four books—detail the distribution of plants in Ireland, he nonetheless wrote reflectively and lyrically about botanical field work as a pleasure for its own sake. Praeger raised walking to the level of exultation and methodology, and not conveyance merely. After all, his most famous book is The Way That I Went—not Where I Went and What I Found There.

I have been working on a lengthy essay on Praeger in recent months, having spent a week last February rummaging through his archives in the Royal Irish Academy, in Dublin. During this time, the idea occurred to me that not only is there a Praegerian product (all those papers and books) but there is also a Praegerian spirit: a spirit of openness to the world, a type of attentiveness that Praeger insists one can cultivate only on foot. Working on this material, I decided that I would, as a type of sympathetic exercise, embrace Praeger’s peripatetic inclination, but employ it in a strictly urban direction, bringing together two parts of Praeger’s work and interests. I am proposing therefore, over each of the next five years, to walk 1000 miles in the city. I invite you to join me by planning a thousand-mile walk of your own in the city or town in which you live. Before you commit, let me give you a little more information on the great man himself and the significance of the 1000-mile annual walk.

Read on at City Creatures here
Posted by DublinSoil at 6:57 PM