In The Kingdom of Decay: How a Motley Team of Subterranean Dwellers Ransacks the Dead and Liberates Nutrients for the Living 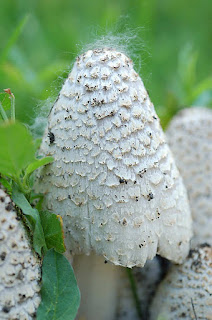 The recently dead rot much like money accumulates in banks (until recently, at least), only, of course, in reverse.  A sage great-great-ancestor who had, for instance, set aside a few shillings for a distant descendant would, through the plausible alchemy of compound interest, have made that great-great-offspring a wealthy person indeed.  In contrast, after death a body-heft of matter accumulated over the course of a lifetime is hustled away, rapidly at first, but leaving increasingly minute scraps of the carcass to linger on nature’s banquet table.  It is as if Zeno had not shot an arrow but instead had ghoulishly slobbered down upon the departed, progressively diminishing the cadavers but never quite finishing his noisome meal.  The soils of the world contain in tiny form, scraps of formerly living things going back many thousands of years.  Perhaps these are the ghosts we sense when we are alone in the woods.

Before you rake away the final leaves of the autumn season, hold one up to the early winter light.  Those patches where you see sky rather than leaf are the parts that had been consumed live, nibbled away by insects or occasionally browsed by mammals.  But you may have to pick up several leaves to see any consumption at all!  The eating of live plant material is rarer than one might suspect.  It is almost as if most creatures, unlike us of course, have the decency to wait for other beings to die before they consume them.  Ecologists have wondered why this is the case, asking in one formulation of the problem “why is the world green?”  At the peak of the summer season the world is mysteriously like a large bowl of uneaten salad.  The world it turns out is green for many reasons but a compelling one is that plants generally defend themselves quite resourcefully.  The thorn upon the rose provides more than a pretty metaphor – this shrub knows exactly what to do with its aggressive pricks.  And if one can neither run nor hide nor protrude a thorn, you might manufacture chemical weapons.  Crush a cherry laurel leaf in your hand, wait a moment or so, and then inhale that aroma like toasted almond.  It’s hydrogen cyanide, of course.  “Don’t fuck with me” is one of the shrubbery’s less lovely messages.


Read on at 3quarksdaily
Posted by DublinSoil at 9:00 AM