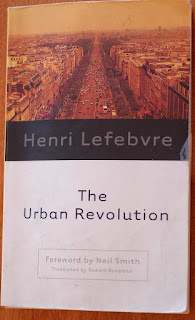 The overarching theme of the relevance of Urban Ecology for a more general environmental thought will be discussed in a series of posts over the coming weeks.  If you are interested use the labels to the right to locate the series.

Henri Lefebvre (1901-1991), was a French Marxist whose philosophically inclined sociological writings have had an enduring influence on geography, urban studies, and, to some extent at least, on environmental thought.  Although La Production de l’espace (The Production of Space) (1974)  is perhaps his most influential work, I have been re-reading his slimmer volume The Urban Revolution (La Révolution urbaine (1970) ) in recent weeks.  From my perspective the volume is interesting since Lefebvre’s hypothesis that society is completely urbanized is important to those of us who might claim that urban ecology is not just an upstart subdiscipline in ecology but may be in fact be a synonym for ecology.

An urban society is by Lefebvre’s definition one that comes about, unremarkably, by the process of urbanization.  The core hypothesis, more arrestingly, is that society has been completely urbanized.  Although urban society has been used to refer to a suite of social arrangements Lefebvre confines the use of the term to a society emerging from industrialization.  Now, as he points out, this totalizing urbanization that leads to urban society is “virtual today but will be real in the future.”  Thus the term urban society refers to “tendencies, orientations, and virtualities, rather than any preordained reality.”  For all this urban society is not fictional: it is a “virtual object”, or a “possible object”.  It is a “horizon, an illuminating virtuality.”  Urban society, Lefebvre claimed is “gestating in and through the “bureaucratic society of controlled consumption.”  Urban society represents "the prodigious extension of the urban to the entire planet".


Though hypothetical, Lefebvre insists that there is evidence to sustain the assertion that society has been completely urbanized.  He points to the loss of autonomy in the agricultural sector.  Agriculture has turned into a form of industrial production.  The reach of industrialization extends across broad territories.  In the process the “traditional unit of peasant life, namely the village has been transformed.”  The urban fabric as a consequence extends not just to the city proper but to “all manifestations of the dominance of the city over the country.”

The emergence of urban society is modeled with the most adorably simple figure:  0--------------------100%.  At least this is the initial form of it.  It gets more complex as Lefebvre provides details of the transition from the state of “pure nature” through the city in its different historical manifestations.  The scale is both temporal and spatial although the relations between the spatial and temporal components are far from straightforward.  One might suppose that 0% would represent humans in a state of nature.  However, the relationships in early history human development between gathering and hunting, agriculture and the political city, from Lefebvre’s perspective, is far from being resolved.  He regards as ideological the “representation according to which cultivated land, the village, and farm civilization slowly secreted urban reality”.  A reversed relationship between the city and agriculture can be conceived whereby the early city give shape and form (oppressively, in many cases, one assumes).  Saying little more, therefore, about the emergence of the city as a historical phenomenon Lefebvre places the political city at the point of origin on his axis.  100% represents a breach of a “critical zone” to urban society. 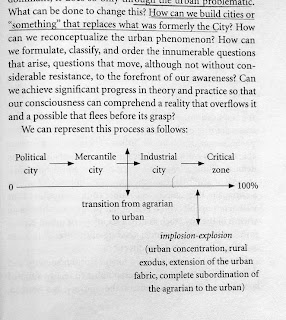 All of this emphasizes the point that the mere existence of urban features, or permanent architecture, does not serve as an index of "urban society" – the virtual object that Lefebvre has caught in his theoretical net.  The political city hosts the paraphernalia associated with the urban – priests, warriors, noblemen, artisans, workers etc. and a suite of distinctive skills, writing being especially important.  The political city rules over the villages in the hinterlands.  As the city widens its influence it strangers become “functionally integrated into the life of the city. ”  The process of integrating the heterotopy associated with merchant life took many centuries in some instances.  The uneasy relationship between the political city and the commercial city in the ancient world illustrate the complementary significances of both types of functions.  Nothing perhaps between symbolizes the tensions and the symbiosis better than contestations between the agora and the market place.  To illustration this tension Lefebvre reminds us of Christ ejecting the money lenders from the temple.   The conception of the city as central market place (surrounded by concentric circles of church, town hall etc) is represented on Lefebvre’s scale as the mercantile city which succeeds the political city.

The political city and the mercantile city in its early stages at least, despite their mutual tensions, had one important thing in common.  The “emphasis” was still on the countryside, as a source of “real property wealth” and attached to the “products of the soil”.  This was to change in a shift that Lefebvre refers to as a “reversal of heterotopy”.  The city after this shift was no longer “a monster, a hell or heaven that contrasted with the village or country life in a natural environment.”  The country becomes “the town’s environment, its horizon, its limit.”  For those living in the country the city now becomes the mediating factor in their relations with the world.

If the mercantile city completes the transition of an agrarian to an urban sensibility the emergence of the industrial city significantly furthers the outwards reach of the urban phenomenon.  Industry needs resources for production but it also needs “capital and capitalists, markets, and an abundance of low-cost labor.” Industry which “one would assume… to be associated with the non-city, the absence or rupture of urban reality”, encroached on mercantile cities, or created new ones.  The implications of industry in the city were “strange and wonderful” (Lefebvre seems not to mean this is a jubilant sense).  The implosion-explosion associated with the industrial city has escaped attention Lefebvre says “because ideologues have tried to eliminate dialectical thought and the analysis of contradictions in favor of logical thought….”  What is lost is “organic totality, belonging, an uplifting image [of the city], a sense of space that was measured and dominated by monumental splendor.”     The image of implosion-explosion is drawn from nuclear physics, and what is implied is the “tremendous concentration (of people, activities, wealth, goods, objects, instruments, means, and thought) of urban reality and the immense explosion, the projection of numerous disjunct fragments (peripheries, suburbs, vacation homes, satellite towns) into space.”

The industrial city is a prelude to a “critical zone” when “the effects of implosion-explosion are most fully felt.”  Industrial production is superimposed upon all exchange.  This clearly is the consequential juncture in the transition to urban society where the urban fabric covers “what was left of the city prior to the arrival of industry.”  What occurs, what might occur, during the “critical zone” is the subject of the book "The Urban Revolution".  One possibility though it that there is a second transition, “a second reversal of direction and situation.”  In this reversal industrialization “becomes a dominated reality during periods of profound crisis.”

The virtual object “urban society” and the unrelenting global expansion of the urban phenomenon seem to imply a comprehensive homogeneity, one that contradicts the empirical evidence of spatial non-homogeneity.  However this is not something that Lefebvre would deny.  In a later interview he confirmed: “there will remain vast spaces, but deserted, little inhabited.”   In his fuller discussion of urban society we get from Lefebvre a comprehensive analysis of the levels and dimensions of our current situation, one that is less suffocating and not as cheerless as it might seem initially.  I will delve into this in a future post.

If this analysis is correct then permanent human habitat, a newish thing in the biosphere, has cultivated an attitude, a sensibility, an orientation that will, if it has not already, dominate the globe.  Clearly it has had a transformative impact on natural systems.  The study of urban systems by ecologists is in its relative infancy.  And though it uses the tools of a more general ecology, it has, I suspect, a capacity and obligation to reflect more completely on the global situation, since this situation is now a fully urban one, with all the complexity that that implies.