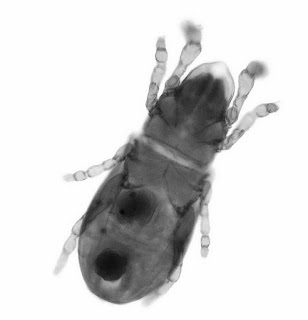 In what follows I conjecture about soil organisms in the context of restoration projects.  This are listed below as C1-C4.  I concentrate here on soil microarthropods (primarily free-living soil mites and springtails), since these are the groups that my lab are most interested in.  I also have Midwestern systems in mind, but the remarks can probably be generalized.  These are for the most part empirically-based conjectures (a "empirijecture, if you will!)": there is not enough work done to be emphatic, but there is data emerging that supports each contention.

C1.       Soil microarthropods are hyperdiverse at most restoration sites.  This may be true even those that are considered to be in poor ecological health.  The number of described mite species globally is 45,000 or so and this may represent less than 10% of the total diversity.  To put this is perspective: if mite diversity got proportionate attention there would be over 100 consecutive "Mite Weeks" on Discovery for every one 'Shark Week”.  In the coming years we will get some real numbers at a variety of sites.  Expect no fewer than 200 species per hectare.

C2.       Factors that negatively affect plant diversity will also have adverse affects on soil organismal diversity.  Invasive species, fragmentation, nitrogen deposition, altered hydrology, climate change and so forth have implications for the soil environment.  In particular, factors that elevate decomposition rates may have devastating implications for soil animals.  This is because the decomposing litter, hosts the greatest diversity of soil arthropods.  I conjecture that in habitats where the litter layer has been reduced diversity is greatly diminished.  This may represent a vast unnoticed local extinction crisis.

C3.       Restoration practices that enhance the diversity of plant species may NOT be as effective in stimulating encouraging belowground diversity.  Although there are strong reciprocal influences between above and below ground aspects of ecosystem structure and function, nevertheless the diversity of soil arthropods is determined by a suite of factors unlikely to influenced by restoration practice.  Researchers starting with the legendary J M Anderson have referred to soil arthropod diversity as enigmatic since many of these species feed on the same substrates (fungi and bacteria) and competition is expected to be fierce (leading to exclusion).  Soil arthropod diversity may be very reliant on the structure of soil and may depend upon the relatively limited mobility of soil fauna.  My prediction is that enhanced diversity of plants will benefit soil arthropod diversity but plant diversity alone will not be a good predictor for microarthropod richness.  We have some evidence of this conjecture in the Chicago Wilderness region from a preliminary study conducted by Claire Gilmore where we found that diversity of soil microarthropod diversity in twelve sites along a gradient of management efforts was related by the variability in soil nutrient availability rather than any index of management intensity.

C4.       Altering soil communities will preside over altered decomposition and nutrient cycling rates in restoration sites.  This is true most obviously when non-native earthworms have been introduced.  Communities that developed in the absence of earthworms (as is the case in many systems north of the last glacial maximum) will be strikingly influenced by these fauna.  This may frustrate restoration efforts since worms can exert a strong influence on plant communities.  Less well understood is the influence of altered soil arthropod communities on the outcome of restoration projects.  We have some evidence from work done by Darin Kopp where we extracted soil microarthropods from a series of replicated restoration plots (the treatments included the incorporation of mulch into soil) and introduced these assemblages into microcosms containing a single substrate in the lab.  There were differences in the leaching of several key nutrients.  The availability of nutrients can be influential in determining early successional trajectories so we expect to spend more time in the coming years investigation such patterns in greater detail.
Posted by DublinSoil at 3:38 PM