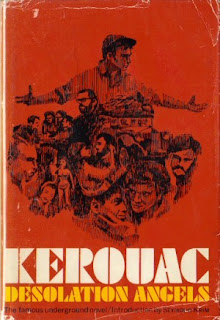 Part I of a couple of posts (who knows, maybe 3) on Kerouac in the Wilderness.

In Dharma Bums, Kerouac describes visiting Japhy Ryder (i.e. Gary Snyder) in his shack near Berkeley and Japhy talks to him about the difficulty of translating Han Shan’s poem Cold Mountain from the original Chinese.  Jack is impressed with the similarities between Han Shan and Ryder.  “That’s like you too, Japhy, studying with eyes full of tears.”  Han Shan, Ryder said, was “a mountain man, a Buddhist dedicated to the principle of meditation on the essence of all things… he was a man of solitude who could take off by himself and live purely and true to himself.”   Ray Smith (i.e. Kerouac) responded, “That sounds like you too.”  “And like you too, Ray”, Ryder generously replied.

Thinking that it would be a good thing for Kerouac to have some solitary time in the mountains, Snyder encouraged Kerouac to apply to work a summer as a fire lookout in the Northern Cascades in Washington.  The first part of Kerouac’s novel Desolation Angels, based upon his notebooks from the summer of 1956, recorded Jack’s summer of anguish and paranoia in his mountain retreat.  Though Kerouac may not be everyman – at times he’s jubilant, at times morose, verbose, braggardly, brilliant, invariably drunk, incessantly dissecting, sullen, always writing, experimenting, vagabonding, observing minutely, oedipally strange, holy, obnoxious – nonetheless Jack’s ordinary failure in the wilderness is perhaps a more successful account of the meaning of wilderness for us everyfolk than all the successful accounts written by the hard men of the great American Wilderness tradition.

Jack’s expectations for his wilderness experience thus come not from the American tradition, at least not directly.  Rather they are formed by escapades with Snyder and by way of Snyder they came from Han Shan to whom Dharma Bums is dedicated.  What then, from the perspective of Han Shan, might the experience of wilderness provide?  Han Shan’s withdrawing into the wilderness, it seems to me, is typical of a more global genre.  In being influenced by this poet, Kerouac became embrangled in a series of gestures which in his very failure to execute successfully led Kerouac to some reflections that I think are instructive and relevant.  Jack was very far from being a happy camper, he was in fact quite miserable in the wilderness; he tumbled down the mountain, but when he reached the bottom he had interesting things to say about this failure.

A poet of the Tang dynastic period (618 – 907), Han Shan (real name: Chih-yen) withdrew from a life of reasonable comfort and retreated to the inaccessible sanctuary of Cold Mountain.  In his compelling study of Han Shan, Wu Chi-Yi reports that Han Shan lived from 577 to 654 AD.  The poet abandoned his family in his middle years becoming a Buddhist monk.  He retreated to T’ien-t’ai Mountain where he remained for thirty years.  Sydner’s translation emphasizes the inaccessibility of the location: “The path to Han-shan's place is laughable,/A path, but no sign of cart or horse./Converging gorges - hard to trace their twists/Jumbled cliffs - unbelievably rugged.”   This mountain retreat is more hospitable to beings other than human beings: “In a tangle of cliffs, I chose a place - Bird paths, but no trails for me.”  In Dhama Bums, Ryder tells Smith that Han Shan would visit the Buddhist monastery nearest to his eyrie on Cold Mountain, but the monks would not serve him food because he practiced outside of the monastic rule.  The solitary submits to his own practice; he is without community.  The story related by Ryder of an emaciated, begging Han Shan derives from the preface to a collection of about 300 of Han Shan's poems attributed to Lu-ch’iu Yin, a prefect of T’ai-chou (though Wu Chi-Yi doubts the correctness of the attribution).  Years go by and Han Shan remained at Cold Mountain.  In time though, the poet ventured a return.  In a poem he reported on the trip: “Yesterday I called on friends and family:/More than half had gone to the Yellow Springs.” (Snyder’s translation).  The monk mourned these deaths: “Now, morning, I face my lone shadow:/Suddenly my eyes are bleared with tears.”

Cold Mountain was his dwelling place.  It is a home without walls or doors.  Put another way Han Shan says: “The east wall beats on the west wall/At the center nothing.”  There he is immune from the criticism of those accuse his poems (written on the rock cliff) of lacking the Basic Truth of Tao.  “Such men he said “ought to stick to money.”   To those that would call him crazy Han Shan says: “Try and make it to Cold Mountain."   Thus the successful solitary is jaded by city life, abandons family, retreats into solitude, slips into Nature, and though he may return that experiment produces dispiriting results. He is fortified in the wilds, more sure of himself than ever.  His thinking is clear, his thinking is right.

Han Shan’s story is Thoreau’s, Muir’s, and Abbey’s in the American tradition, but also with greater or less degrees of fidelity is that of Jesus, the early Christian ascetics, and even that of the anonymous poets of the early Irish tradition (“Cold, cold!/Cold to-night is broad Moylurg,/Higher the snow than the mountain-range,/The deer cannot get at their food.”).  Yeats as well, jaded from city life, replicated in the little microcosmos of Inisfree the familiar pattern: “Nine bean rows will I have there, a hive for the honey bee”.

Off went Kerouac then inspired by Han Shan and encouraged by Snyder.  Off went he to discover “the meaning of all this existence and suffering and going to and fro.”   Of went ascetic, poetic, monkish Jack to the wilderness.  Good ascetic that he is Jack has left behind liquor and drugs and plans to come face to face with “God or Tathagata [the Buddha]” or at the very least face to face with himself.