Nature Deficit Disorder and the *Next* Generation 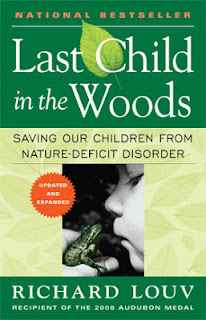 The youth of America show consistent concern about the welfare of those even more youthful than they are. The youth themselves, it seems, are A-Okay.

Such is the message I get from environmental science students when I present to them the evidence for Nature Deficit Disorder. The diagnosis of Nature Deficit Disorder stems from the observation that the past generation of children have been getting significantly less exposure to natural experiences than was the case for previous generations of children. In his widely read book Last Child in the Woods, journalist Richard Louv claimed that this reduction in contact with the great outdoors has had tremendous implications. Nature Deficit Disorder as Louv reported it, “describes the human cost of alienation from nature.” These costs include a diminished use of the senses, physical and emotional illnesses and a magnification of attention deficit problems. Louv’s work has has assembled the evidential support for and has now motivated a national movement to create more opportunities to bring children out of doors. This is fostered by the Children & Nature Network which Louv co-founded and by many regional initiatives such as the Chicago Wilderness Alliance's Leave no Child Indoors program. I am certainly all for it.

Richard Louv draws optimism in talking with college students about his work. These students belong, as Louv sees it, to the “first de-natured generation.” Collectively, they are experiencing many of the symptoms of the affliction that Louv has identified. When the issue of “nature’s role in health — physical, mental, and spiritual — was introduced into the conversation the tone changed…”, Louv wrote. What began as more theoretically inflected discussions about environmental problems “quickly turned personal.” Here is a problem that one can do something about and the students responded warmly.


When I talk with my students, it is exactly as Louv described - lively conversations emerge and students use vivid personal anecdotes to support their contentions. I add a little drama into the discussion, it’s true, by framing it as an accusation my generation is leveling against theirs. “We” spent more time in nature as children and derived the benefit, even if, frankly, this is not especially well reflected in the state of global environmental health or justice. However, “their” generation has not, and they have spent unhealthy amounts of time on their cell phones, computers, and game consoles. As a consequence college-aged students are, we claim, prone to attention deficit disorder, depression, and are more alienation from the Earth. And they are plumper.

Now, initially students generally take the criticism to heart. Those, admittedly few, students guilty of doing so, raise their heads from iPhones that had been sequestered under their desks, supposedly out of view. Generally they concede the point. They indeed have spend less time in the great outdoors than their parents, they have engaged in less unstructured play, and they are a little overly reliant on their phones. After a few moments of self-flagellation though, something strange happens. Students recall camping holidays, or a favorite tree they would sit under, or a neighborhood park, or hours spent just hanging out with friends in the neighborhood. No, despite the force of Louv’s argument, now that they think about it, they spent at least some time in nature.

For all that, they report, they are concerned. Not so much for themselves but for younger siblings, or their younger cousins. Now those little blighters really never budge from a screen, and are in real danger because of it.

This attitude seems to channel Douglas Coupland's notion of Ultra Short Term Nostalgia, from his book Generation X. This affliction is defined as “homesickness for the extremely recent past”. In the view of my students things were so much greener when they were growing up… five years ago.”

Writing this, I asked Oisín, my 17 year old whether he was suffering from Nature Deficit Disorder. As it happens he was studying for an Environmental Science final. He conceded the point. Yes, he agreed, he did not spend enough time “in nature.” It was, he pointed out, my fault. After he reflected a few moments though, he remembered camping holidays, walks outside, countless hours with friends in local parks and playgrounds, in a friends backyard (they had a tree house). He recalled building snow forts. And yes, he was also concern that kids no longer get to do this.

The populations of students I have in my classroom are generally ones more likely to have had a rich outdoors life. After all, most are environmental science students. And Oisín is the son of professor of environmental science; perhaps I ushered him out of doors more often than he recalled. That being said, I have taught extracts of Louv’s book to freshmen registered for their first college seminar. Though as much as I like to think they sign up because of the fascinating material they will encounter with me, more often than not, scheduling convenience is a regular factor that brings these students to me. Regardless of the student population though the conversations, as I relate them above, take in broad strokes the route I described. Every generation has mild envy of the one before it and has concerns for the youth that come after them. Rarely do we ourselves collectively suffer from the afflictions we are diagnosed with.
Posted by DublinSoil at 5:10 PM