Quentin Tarantino: Author of the Gatsby

My piece from 3quarks: 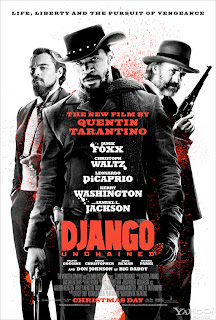 I do not mean to suggest here that Quentin Tarantino set out in Django Unchained to revive in any sort of deliberate way the characters and themes of F. Scott Fitzgerald’s The Great Gatsby. The differences between these two projects are more substantial than their commonalities. One, after all, is a movie and the other is a novel. More importantly, Tarantino is self-consciously a genre re-configuring story-teller, whereas Fitzgerald wanted in The Great Gatsby to write something new using the form of the traditional novel. The Great Gatsby is that most brazen of beasts The Great American Novel. That being said both, in fact, are distinctively American works. Moreover, in both works the action is driven by a hero’s bid to rescue a gal. Both play games with time, though quite different ones as I will elaborate below. In both, injustices are addressed and resolved with varying degrees of success. To my mind the commonalities of revision, rescue, and redress, though these are perhaps the stuff of all great works, are so distinctively rendered in Django Unchained that one can say that Tarantino has re-authored Gatsby.

Read on at 3quarks
Posted by DublinSoil at 8:56 AM