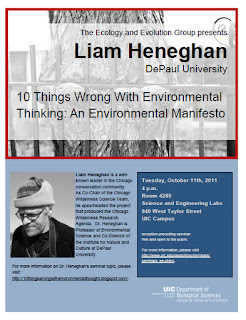 I was very pleased to hear that my talk on 10 Things Wrong With Environmental Thinking (10TWWET) provoked some good classroom discussion at UIC earlier today.  I was not, of course, there to hear it and respond to comments, nor do I know specifically what issues were raised.  A pity!  Generally though, I can anticipate the sorts of questions the arguments I have been reviewing for this project provoke.

Before remarking on some of comments I have received on this work a word or two about the overall themes of the work.  Central premises of 10TWWET, and pretty incontrovertible ones I think, are that environmental thought has suffered from confusions about definitions of nature, confusion about the dynamics of nature, confusion about our place in nature, some suspicious hankerings after purity, after perfect origins, and it revels in drastic and usually self-defeating predictions about end times.  Environmental thought so disdains the conceptual and phenomenological messiness of human interactions with its world that it has become befuddled by its own special sauce of ontological, epistemological and metaphysical confusion.  It so disdains the mess of the world, that it mystifyingly has overlooked certain things in the world until fairly recently.  Ecologists, for instance, have been tripping over and through, and around some obvious objects in nature in an effort to get into the supposed “real” nature, that they have not noticed the things right in front of them.  Cities are just one example.  Nor do we have a very substantial ecology of use.  We are awfully good at shrinking from the world, as if this was the only response available to us.  This is why I claim that environmental solutions tend to make ascetics of all of us.  Only the dead have perfect ecological footprints.


Some philosophers and other humanistic scholars regard the program of 10TWWET as being too pragmatic, its conceptions of environmentalism as too preoccupied with themes raised in the history of ecology as a natural science, and too thin in terms of the philosophical resources utilized.  The latter problem, of course, reflects my novice knowledge of philosophy.  Those ecologists trained as natural scientists, on the other hand, tend to be fairly impatient with the work since it is not hypothesis driven, and it draws upon inscrutable philosophical texts and arguments about problems that seem to be irresolvable.   On the matter of presentation some of my scientific brethren don't dig that I quote a lot from these texts, presumably at the expense of stating things in a more contemporary and concise fashion. Thank goodness I didn’t read my paper – another bone of contention that ecologists have with their colleagues in the humanities.   On the matter of style one of my colleagues requested of me after the talk that I “answer without the preamble”, to which I replied "the preamble was the answer."

One might conclude that it is pleasing to talk about a topic guaranteed to irritate at least someone in every audience.  In truth I am writing this book in part to help me to see where we are as environmental thinkers.  Writing in this project is simply the counterweight to a substantial diet of reading.  I am trying to systematically reread the pivotal texts of mid 19th – early 21st C environmental thought, and to organize some of the themes so that their commitments become apparent and available for a sympathetic critique.  But though the book is in many ways for me, I do want this to be useful to others.  So I want to be pretty clear in the way I talk about the project.  I try to entertain, sometimes I am successful at it, and this might be a distraction as the jokes may come at the expense of concision.  But it may very well be that the problem of the two cultures persists, that ecologists have little patience for what philosophy does, and how philosophers go about their business and, on the other hand, that philosophers remain suspicious about the territorial claims made by ecology where it seems to claim to be the last word on inspections of nature.

I am more confident in the first of these suggestions than in the second.  And neither addresses the question of what is "data" for both disciplines.  Nor have I articulated here, in any particularly forceful way, why ecologists and philosophers may need to set aside their mutual disdain - surely they can go on ignoring one another excepting for some harmless palaver over cocktails?  However I don't think this is a wise solution.  It seems a sure thing that if the best thoughts for the future of the environment emerging from either discipline were really working (in the sense of contributing to solving environmental problems), I am pretty sure we know about that by now.  Interdisciplinary approaches, no matter how unpleasantly trendy they are, will be needed.  We need a body of thought commensurate with the scope of our environmental problems and this will emerge I suspect and the intersection of several discipline – "ecotonal thoughts" we might call them.  A hypothesis to conclude: “Founding environmental thought on notions of hybridity, impurity, the mess in the middle, will reduce the intensity of debates over the goals of environmental policy.”  Ok, it’s late… I am fading into an obscurity not associated with the difficulty of thinking but with a sluggishness that comes from sleep deprivation.

I shall now step down from my pulpit and bid you a good night.  A big thanks to my colleagues at UIC for the invitation.