Understanding the patterns of rarity of vulnerable species: some background

Why is this important? The identification and protection of rare species remains central to the task of conservation.  However, conservationists now know that there are several quite distinctive ways in which species can be rare.  In addition not all forms of rarity are equally significant for regional conservation planning.  Translating the different meanings of rarity into appropriate policy directives at a local scale requires research into both the patterns of rarity and the mechanisms that distinguish rare species from common ones.

Rarity is an important correlate of extinction vulnerability (one of a number of such correlates, it should be noted) (Davies et al. 2000); that is, rare species are more likely to go extinct than common ones.  Rare species are therefore afforded special attention in conservation circles (Lawler et al. 2003).  The familiar policy terms endangered, threatened, vulnerable species, rely heavily on rarity for designating extinction risk.  It is, however, an ecological truism that rarity is common.  This important concept alludes to the fact that a relatively few species may be abundant in an assemblage, but the  majority of species are rare, often being represented by as few as a single specimen in ecological surveys (Preston 1948, Magurran and Henderson 2003).  For example oak and hickory species typically dominate in an Oak Woodland, whereas most other species in the will occur in relatively low numbers.  Since most species are not commonly encountered, it is clearly useful to distinguish species that are inherently rare (those species whose relative rarity is related to, for example, its life history strategy and may therefore have a stable, non threatened population) from those that are both rare and vulnerable to immanent extinction (Maina and Howe 2000).  For instance, a species that is has a small population but which has a low variability in their populations numbers, rarely fluctuating from year to year, may have a reduced risk of extinction (Pimm et al. 1988).
The determination that a rare species has a conservation priority status should be based on objective criteria (Ledant 1991, Mace and Lande 1991).  Delineating the type of rarity being addressed in a given conservation strategy can be a crucial criterion.  Both research and action that promotes rare species conservation must carefully also consider the issue of the geographical scale on which rarity is assessed (Fagan et al. 2005).  A species with scarce populations in one area may be geographically widespread and may therefore not be regarded as having as high a priority as a species with small population in a very restricted geographical range.  With this is mind, it is important that conservation reserve selection and design procedures that employ rarity as a decision criterion are implemented with a sensitivity not only to local needs but also takes the regional context into consideration (with a view to maximizing regional diversity) (Rodrigues and Gaston 2002).  Such sensitivity to the multiple scales contributing to rarity is embedded in recent attempts to classifying different types of rarity. 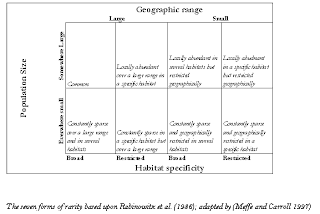 Rarity is a confusing concept because it can have so many meanings (Batianoff and Burgess 1993).  It is a relative concept, meaning that species are considered rare compared to either other species, or compared to estimates of environmental carrying capacity or to the expectations of observers (Kean and Barlow 2004).  Most typically the criteria of comparing populations of one species to other comparable species is employed, rather than criteria that assess the carrying capacity of the species (the number that an environment can theoretically sustain), although the metrics of comparison applied are often inconsistent (Bevill and Louda 1999).  The importance of studies comparing characteristics of common and rare species is that they may pave the way for a mechanistic understanding of the evolutionary and ecological factors generating patterns of rarity, and therefore allow for more precision in conservation planning (Harcourt et al. 2002).
Arguably a species can be rare in seven distinct ways (Rabinowitz et al. 1986).  These seven types of rarity are generated by examining species along axes of geographical range (restricted or broad ranges), habitat specificity (wide or narrow habitat needs), and local population size (large or small).  Organized along these three axes 8 patterns are identifiable, seven of which can be considered forms of rarity (common species, the eight pattern, are those species that maintain large populations with broad habitat requirements across a large geographical range) (see text table above).  Of the seven forms of rarity Rabinowitz and colleagues (1986) found three forms of rarity prevailing into the extensively studied British vascular flora.  These are:  species with a restricted geographic distribution, narrow habitat distribution or low local population abundance.  Several studies have followed adopted the approach pioneered by Rabinowitz and colleagues (Kattan 1992, McCoy and Mushinsky 1992, Dobson et al. 1995, Goerck 1997, Yu and Dobson 2000).  The classification has been judged a useful way of ranking conservation priorities.  One conclusion to emerge from these studies is that the conservation implications of the different forms of rarity will be determined by the scale of the observations (Hartley and Kunin 2003), and by the life-history characteristics that produce this rarity (Maina and Howe 2000).  The scenario sketched above of a species with a modest local population with a relatively broad geographical range may mean that its loss in the Chicago region may be a local conservation calamity, but the species may be have a relative secure future since it has many populations outside the region.  An intuitive conclusion to emerge from this is that extinction vulnerability is greatest for rare species that with restricted ranges and low densities, and this has been confirmed from several case studies (Gaston 1994).  Such species should be afforded a high conservation priority.
The biological mechanisms by which rarity (in all of its forms) is produced has been intensively studied, although many residual questions persist (Harcourt et al. 2002).  Variation in certain life history characteristics have been linked to rarity, for example: trophic specialization; dispersal ability; reproductive potential; body size; trophic position; microhabitat and matrix use; disturbance and competition sensitivity traits (Henle et al. 2004). However these traits tend not to be consistently reliable indicators across all taxonomic groups (Pilgrim et al. 2004).  A complete understanding of the mechanisms influencing rarity may be needed for the highest priority species, those analyses may be expensive to conduct.
Batianoff, G. N. and R. Burgess. 1993. Problems in the Documentation of Rare Plants-The Australian Experience. Biodiversity Letters 1:168-171.
Bevill, R. L. and S. M. Louda. 1999. Comparisons of Related Rare and Common Species in the Study of Plant Rarity. Conservation Biology 13:493-498.
Davies, K. F., C. R. Margules, and J. F. Lawrence. 2000. Which Traits of Species Predict Population Declines in Experimental Forest Fragments? Ecology 81:1450-1461.
Dobson, F. S., J. Yu, and A. T. Smith. 1995. The Importance of Evaluating Rarity. Conservation Biology 9:1648-1651.
Fagan, W. F., C. Aumann, and C. M. Kennedy. 2005. Rarity, fragmentation, and the scale dependence of extinction risk in desert fishes. Ecology 86.
Gaston, K. J. 1994. Rarity. Chapman and Hall, London.
Goerck, J. M. 1997. Patterns of Rarity in the Birds of the Atlantic Forest of Brazil. Conservation Biology 11:112-118.
Harcourt, A. H., S. A. Coppeto, and S. A. Parks. 2002. Rarity, specialization and extinction in primates. Journal of Biogeography 29.:445.
Hartley, S. and W. E. Kunin. 2003. Scale Dependency of Rarity, Extinction Risk, and Conservation Priority. Conservation Biology 17.:1559.
Henle, K., K. F. Davies, M. Kleyer, C. Margules, and J. Settele. 2004. Predictors of species sensitivity to fragmentation. Biodiversity And Conservation 13:207-251.
Kattan, G. H. 1992. Rarity and Vulnerability: The Birds of the Cordillera Central of Colombia. Conservation Biology 6:64-70.
Kean, J. and N. Barlow. 2004. Exploring Rarity Using a General Model for Distribution and Abundance. The American Naturalist 163.:407.
Lawler, J. J., D. White, and J. C. Sifneos. 2003. Rare Species and the Use of Indicator Groups for Conservation Planning. Conservation Biology 17.:875.
Ledant, J. P. 1991. Critical Remarks On The Choice Of Criteria For Biological Evaluation. Annales de Gembloux 97:157-176.
Mace, G. M. and R. Lande. 1991. Assessing Extinction Threats: Toward a Reevaluation of IUCN Threatened Species Categories. Conservation Biology 5:148-157.
Magurran, A. E. and P. A. Henderson. 2003. Explaining the excess of rare species in natural species abundance distributions. Nature 422.:714.
Maina, G. G. and H. F. Howe. 2000. Inherent Rarity in Community Restoration. Conservation Biology 14:1335-1340.
McCoy, E. D. and H. R. Mushinsky. 1992. Rarity of Organisms in the Sand Pine Scrub Habitat of Florida. Conservation Biology 6:537-548.
Meffe, G. K. and C. R. Carroll, editors. 1997. Principles of Conservation Biology. Second edition. Sinauer Associates Inc., Sunderland, Massachusetts.
Pilgrim, E. S., M. J. Crawley, and K. Dolphin. 2004. Patterns of rarity in the native British flora. Biological Conservation 120:161-170.
Pimm, S. L., H. L. Jones, and J. Diamond. 1988. On the Risk of Extinction. American Naturalist 132:757-785.
Preston, F. W. 1948. The Commonness, And Rarity, of Species. Ecology 29:254-283.
Rabinowitz, D., S. Cairns, and T. Dillon. 1986. Seven forms of rarity and their frequency in the flora of the British Isles. Pages 182-204 in M. E. Soule, editor. Conservation Biology:  The Science of Scarcity and Diversity. Sinauer.
Rodrigues, A. S. L. and K. J. Gaston. 2002. Rarity and conservation planning across geopolitical units. Conservation Biology 16.:674.
Yu, J. and F. S. Dobson. 2000. Seven Forms of Rarity in Mammals. Journal of Biogeography 27:131-139.
Posted by DublinSoil at 8:42 AM