Abandonment, nostalgia and the technology of human landscapes

In the coming weeks I will be "checking in" on my understanding of how environmental thinkers have regarded technological development.  I had started writing on this theme a couple of years ago.  This is what I have so far on this theme.
. 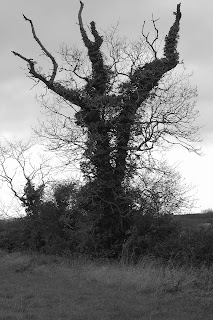 In Italo Calvino’s fable Baron in the Trees the young Cosimo Piovasco di Rondò retreated from a family dinnertime squabble and took to the trees vowing never to return to the ground again. His act, a reversal of the flow of human evolutionary history, brought the impetuous baron back to humanities’ primordial dwelling-place. This recapitulation necessitated compromises. The baron abandoned his tunics, his stockings, his powdered coiffure (the year is 1767), and over the course of the years he modified his habits and equipped himself for life in the canopy. Reacclimatizing to the ancestral habitat his body warped and, by the end of his long life, he may not have been able to return to solid ground even had he chose to do so. The baron’s retreat was merely an extreme gesture in the relationship between people and primeval landscapes – a relationship defined by abandonment and the subsequent scramble for adaptation. It is a simultaneously optimistic and nostalgic affair. Accommodating our relationship with landscapes of the past, the abandoned wilderness from which we created our modern human landscapes is one of the challenges of our times. The prospects and problems associated with loss of wildness are inarguably a legacy of technology. Whether or not technology can assist us in solving the problems that technology created remains a matter for debate. Up for debate also is whether the protection of the wild can be assisted by technology.
Despite the many excellences of the human body – the dexterous grip of the hand, the engineered precision of stereoscopic vision, the marvels of bipedality, the hitching of gristle and flesh to gracile but sturdy bones, the preposterous engorgement of the human brain – we are nevertheless no more than adequately provisioned for the physically taxing world in which we live. We are creatures – rare when considering the sweep of creation – trapped between the heavens and the earth: confined to the surface of the soil. To take possession of a new habitat, or even to retreat to one from our past (as seen in the case of the baron), is achieved only with great difficulty. The primeval human animal, newly descended like a tremulous god from the canopies of east African forests, was a succulent, vulnerable thing. The irredeemably terrestrial nature of our lungs yields the aquatic realm unlivable to us. The interstices of the soil, snug and receptive to perhaps a majority of living things, are not a home for the hulking hominid. A glance overhead at birds and insects (and the occasional mammals) is to peer into a distance world. And we are an undefended and doubtlessly a tasty morsel – a fact attested to by our sociality (primate vulnerability, it seems, loves company). Despite human physical limitations we have extended our reach to all of these seemingly foreclosed worlds. We have plumbed the depths of the oceans, flown through the atmosphere, and penetrated deep within the earth. The means by which we have overcome these limitations is through our capacity for technology.


Technology is peel upon the human fruit. It gives form to the pulp within. Technology supplements the biological deficiencies of the species. It is a means by which vulnerability is overcome. Through technology the sprawling furnishings of human imagination are made manifest. Dreams are transformed into artifact. The primeval landscape is tamed and human habitat is created in its place. Technology extends the range in time and space of the human enterprise. The small enterprises of the past become the lavish undertakings of today. Somatic energy, the energy of muscle and bone, is augmented by the extrasomatic energy of the sun, harvested and put to work in machines. The ephemeral aspires to permanence. Architecture becomes monumental. Technology removes us from local ecologies, where humans and the energy and matter (living and non-living) with which they consort, are all closely proximate. Human ecology has become extended, growing in expanding circles until human ecology became global ecology. Assisted by technology, wilderness yielded to agriculture, nest becomes abode, abode becomes village, village becomes town, and town becomes city. Each step is a surging forth and a leaving behind. In the creation of a permanent architecture, a feat that is a relative new component of our species tool kit, we molded the world to abet our reveries. For a relatively vernal species such as ours (we date back about 250,000 years) the city, now the majority landscape for people, is a latecomer. The oldest cities date back about 6,000 years. It is fatuous to argue against the benefits of this unfurling human drama. Cities are no longer a sink for people. They are places where human welfare peaks. Despite the seamier underbelly of the city with its iniquitous pleasures, it is here that human creativity reaches a zenith. It may therefore seem churlish to point out that the colonization and creation of new habitat comes at a cost. Not only do we consistently fail to adequately deal with our powerful nostalgia for abandoned and wrecked landscapes, we have often failed to address, or relegated to an afterthought, the moral obligation we have to fellow beings – the diversity of other living forms – that live in these abandoned places.
A combination of nostalgia, moral obligation, and a desire to conserve economic resources should motivate us to preserve and to restore habitats consigned to memory. In Chicago, the opportunities to meet this challenge are unrivaled. The invention of the landscape of the city and hinterland were at the expense of systems: prairies, savannas, marshes, and woodlands, which once challenged us. Now these ecosystems are rare: locally rare, but also are globally rare. Seldom do we associate major cities with ecological conservation. In developing city-based conservation approaches, Chicago is leading the way. Look for this new conservation approach in natural landscaping projects in your neighborhood, or in a little patch of remnant prairie under management at the edge of your subdivision, in a prescribed fire in the nearby forest preserve, or in a group of volunteers collecting the seeds of native plants on a Sunday morning. Conservation is occurring close to home. Conservation is a new bloom on the human fruit – the restoration of systems is a system of technology that supplements our deficiencies in our ethics and in our reverencing of the abandoned landscape. It is too early to say how effective it will be. However, seeing conservation up close will make it easier to envision the impacts of conservation in distant places.
The environmental consequences of technologically-mediated change in the world are highly ambiguous. Technology, as supplement to our biological deficiencies, is a means through which we have survived. But it is also the root of many environmental problems: altered atmosphere, declining biodiversity, exhausted soils, and polluted waters. Though it may seem that we suffer a surfeit of technology, technology is often regarded as the means by which we address our problems. Building the bridge that grants us access to the landscapes of the future is an optimistic venture. However, being overly optimistic as we lay plank upon plank that the distant riverbank is within the reach of our technology is a massive gamble. Preserving the locale on the riverbank from which we have set off seems the least we should do.

This originally appeared in a DePaul publication.
Posted by DublinSoil at 10:51 AM