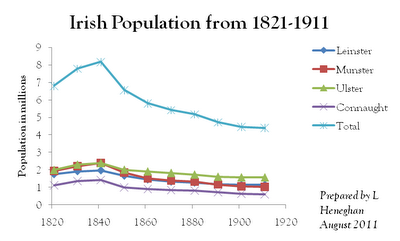 I spent part of the morning looking at Irish census statistics from 1821 to 1911.  There is quite a treasure trove of archived census reports at www.histpop.org.  Two main stories interest me here (see the accompanying graph; I took the data from the facsimiles of the census reports).  There first concerns the very rapid rise in the population from the early 1700s to right before the Great Famine  (in Irish “an Gorta Mór” – the Great Hunger), attested to in the graph by the rise from 1821 to 1841. There have been some interesting theories about this sharp increase.  The second phenomenon, one more commonly inspected, is the century long decline in the population after the famine (1 million dead and a pattern of emigration that continued till relatively recent times).  The declines between 1941 and 1911 are quite amazing:


The Great Famine has attracted the attention of environmental demographers some of whom have seen in it the disaster predicted by the Rev Malthus.  I will be spending a little recreational time inspecting the Malthusian literature on the Famine in the coming days, and hopefully will post on 3Quarksdaily.com on Monday next on this topic.
Feel free to comment - I will be thinking this through over the coming days and trying to find a useful way of summarizing it.
Posted by DublinSoil at 12:54 PM