The Uses and Disadvantages of History for Ecological Restoration

On first glance the work of Friedrich Nietzsche (1844–1900), the German philosopher, might not seem especially helpful for restoration ecologists or indeed for anyone contemplating our relationship with the natural world. After all, his work supposedly challenges the foundations of Christianity and traditional morality. Nietzsche’s famous locutions concerning the “death of God” and his extensive discussions of nihilism should, however, be seen as his diagnosis rather than his cure. For Nietzsche our real cultural task is to overcome the annihilation of traditional morality, replacing it with something more life-affirming. The failure of our traditional precepts of value stem from the fact these express what Nietzsche calls the ascetic ideal. This ideal measures the appropriateness of human actions against edicts coming from beyond our natural and earth-bound life. The highest human values, as we traditionally assess them, came from a denial of our natural selves. Nature, in turn, is regarded as having no intrinsic value. 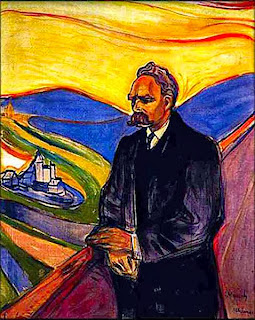 Thus Nietzsche even when he wrote in areas seemingly distant from traditional environmental concerns has useful things to say to us environmentalists. At times, in fact, his aphorisms are those of a poetic naturalist. In The Wanderer and His Shadow (1880, collected in Human, All too Human) he wrote “One has still to be as close to flowers, the grass and the butterflies as is a child, who is not so very much bigger that they are. We adults, on the other hand, have grown up high above them and have to condescend to them; I believe the grass hates us when we confess our love for it.” This is not, of course, to claim that Nietzsche is a traditional naturalist. His concerns are primarily about the thriving of human life, though in this he seems less like a traditional wilderness defender and closer to a contemporary sustainability advocate who seeks to locate a promising future for humans while simultaneously solving environmental problems.

See the full essay here
Posted by DublinSoil at 1:32 PM