The Time-Traveler’s Guide to Future Vegetation: being a comment on debates over restoration and novel ecosystems 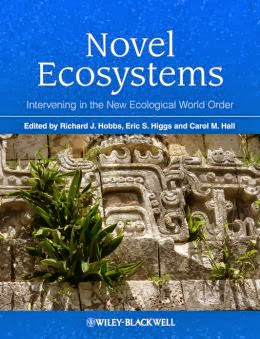 If an ecological manager from today was transported to the future and shown three sites: one minimally influenced by human activity (assuming that such a thing exists even now), one classically restored, and one that had been classified at the time of the manager’s departure as a novel ecosystem, the manager would not be able to distinguish based solely upon an inspection of their respective ecological properties one category of site from the other with certainty.
I will say a little more about the classification of each of these categories below, but for now all that you need to know is that a restored system, as I use the term here, has properties reflecting an attempt to apply a historical reference to rehabilitating a degraded habitat. A novel ecosystem, in contrast has a composition of species and properties reflecting marked anthropogenic influence for which there is no historical analogue.
Contemporary ecologists have for generations abandoned any expectations that natural systems, even those uninfluenced by human activity, are static. In the absence of human intervention ecosystems will change, according to some accounts at least in episodic ways, as one ephemerally stable condition gives way to the next. Each stage will be characterized by species combinations that are largely historically unprecedented, as paleoecologists have documented for systems since the Quaternary and even before. Attempts, therefore, to predict the future of “natural” communities are prone to error. The future is indeterminate. In this ecologists agree with an emerging philosophical consensus that the past is realer than the future, and that the present moment is realist of all.
Similarly, the future condition of a restored system will not be readily identifiable to today’s manager. If our time-traveler has with her the SER Primer on Restoration Ecology, an inspection of the expected properties listed there for an adequately restored system would confirm that this difficulty must be the case. Identifying which species of a future assemblage are indigenous — in restored systems the majority of species should be natives according to our contemporary standards — becomes more difficult the further into the future we project. Over sufficiently long time scales, evolutionary forces come into more pronounced play. Additionally, it is conceivable that species not at present within a biogeographic range of a system may become so in due course without human intervention. Thus naturally altered vegetation patterns may not easily distinguished from those caused by deliberate or inadvertent human introductions. Nor will it be especially helpful for the manager to confirm that all necessary functional groups are present in the future system, nor indeed that the system is appropriately integrated into a physical environment in a manner that helps sustain the sites’ populations, as these properties may be expected of all three site categories. Ultimately, the difficulty that our time-traveler will have in identifying today’s restoration efforts projected into the future arises because current restoration thinking acknowledges, as it should, that communities are dynamic, and sound contemporary management practice should not seek to curtail this dynamism.
The success of a restoration project being currently conducted could be evaluated in the future by measuring, as prescribed by the Primer, the system’s capacity to self-sustain to the same degree as some now long-forgotten reference ecosystem. Assuming that a system passes this particular test, the results will not discriminately useful, for a successfully functioning novel system, or a never-degraded system, should also be self-sustaining.
Novel systems, currently under management no matter how minimal (this absence of intensive management being a defining aspect of novel systems), would likewise be difficult to distinguish from sites under restoration management or merely undergoing long-term successional change. All are subject to the vagaries of dynamic but unpredictable change. One manager’s failed restoration project, or natural successional system, is another’s future novel system. Though we can, perhaps, assert some probabilistic differences between these categories, theoretically they can be indistinguishable. Of course, it may well be the case that any outcome in the future will be regarded by our time traveler as a “degraded system”, desperately in need of management. Though it is tempting to assume that all systems in the future will be novel one, however, those investigating the novel ecosystem paradigm resist, for the time being, that urge. Something that is everything is close to be nothing at all.
That our time traveling manager cannot distinguish these categories of sites based purely upon an inspection of the properties of each of them is true, I would say, even if this future is merely in one week’s time. It is true, perhaps, even for that future we are all strangely transported to each and every moment of our lives, as our successive nows are converted one by one into that series of thens that we can the past.

It is a useful thing, I think, for practical people to imagine a future, as we have just done, that bears the traces of their past actions. Whatever our inclination towards historical references may be, all ecological practitioners are, of course, essentially oriented towards the future and not the past only. But as we have seen there is a reasonable chance that one would not be able to distinguish the outcomes of three alternative histories from one another without being explicitly informed of those histories. This conclusion should not be interpreted nihilistically, nor should it demotivate us as a consequence. After adjusting herself to the unusual circumstances in which she finds herself the manager would inquire about those site histories, and based upon these histories she would have, no doubt, an assessment of the success of these projects. The point I am making here is that history matters. To make an slightly extravagant parallel: we shall all end up as corpses one day, and though it may matter little to us personally how we ended up that way, nevertheless it will be consoling if it matters to someone what the historical circumstances were, be they natural or suspicious, that led up to the ghastly moment of our demise.
Nature does not know its own history except, perhaps, through us. But both classical restoration and the novel ecosystem paradigm are both predicated upon a certain interpretation and implementation of history. This is obviously true for classical restoration defined by the SER primer as “the process of assisting the recovery of an ecosystem that has been degraded, damaged, or destroyed.” All those “re” and “de” words etymologically reveal their indebtedness to the past. The origins of the prefix “re”, for instance, refers to the original Latin, meaning ‘back’ or ‘backwards’.
The novel ecosystem concept’s indebtedness to history is less conspicuous. Hobbs, Higgs and Hall (the three H’s for the remainder of this paper) have defined novel ecosystem (their consensus definition) as “a system of abiotic, biotic and social components that by virtue of their human influence, differ from those that prevailed historically, having a tendency to to self organize and manifest novel qualities without intensive human management.” Note that this defines the novel system as a thing, not by a set of actions by which one might manage them (as was the case in defining restoration ecology).
At first glance one might be inclined to say that the novel ecosystem is an ahistorical concept. To put it another way this is history in a deficient-mode: history being conspicuous by its conscious absence. But there is more history involved in the identification of a novel system than might at first be obvious. Firstly, novel ecosystems depend upon historical analysis for their identification: they emerge from a contemplation of the analysis of the history of a site. A decision is made that these systems, with their novel components and properties, have certain emergent properties that have value and are therefore worth studying, conserving, and managing, albeit non-intensively.
There is no particular reason why management efforts connected with novel ecosystems and traditional restoration strategies cannot co-exist side by side, since managing a site according to the dictates of either paradigm may in fact produce theoretically indistinguishable long-term outcomes. In fact the advocates for the novel ecosystems concept are at pains to insist that the relevance of traditional restoration is not being called into question. However, another element of the historical analysis involved in the identification of novel ecosystems concerns the temporal characterization of supposed thresholds beyond which the attainment of traditional restoration goals becomes increasingly unrealistic. For instance, if the soil has be modified by anthropogenic nitrogen inputs beyond the point where the historical vegetation is likely to grow. Thus a site being treated as restorable might in fact be irredeemably a novel ecosystem. One man’s 300 years restoration project becomes another’s symptom of a breached threshold.
Finally, although novel ecosystems are defined by their lack of need for intensive management, nonetheless when a novel systems is providing conservation services and generally functions in a manner that is pleasing then a management regime may be instituted. As soon as this management is enacted the novel ecosystem is thereby governed by a historical reference system even if the historical moment being referred to is but a few moments in the past.

That the novel ecosystem remains enmeshed in history is conceded by its proponents. The “three Hs” acknowledge as much stating that “there is a gravitational pull in our discussions towards historical conditions. In acknowledging novel ecosystems, it is plain that this gravitational pull is sometimes very weak; it remains however, if only as a reminder that the past matters and has matters.” It’s turtles all the way down, where those turtles are history!
The challenge for us as restorationists therefore concern not simply the question of whether to use a historical reference system or not — we must — but rather it is to determine how much history do we need to, or even care to, consider. How should we use the the historical record? Or to put it another way, how much of history must we forget when we think about the future? This is something I will turn to in the next post.

Posted by DublinSoil at 4:28 PM