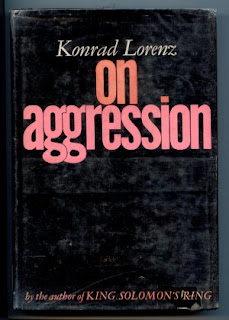 There is a special moment in many works on animal behavior where the author switches from their account of chimps, bees, fishes, geese, rats or another favored organism and tells us what it means to be human.  I call this the anthropic shift.  The behavior of the human animal need not be an area of particular expertise for the author; the switch is presumed to be validated by the evolutionary continuity of humans with other animals.

Animals will have both generic similarities with their evolutionary relatives as well as having attributes that are specific to them alone. Not all behaviors will therefore have direct homologues in species-to-species comparisons.  Humans don’t, for instance, have a direct equivalent to the waggle-dance that bees use to share foraging information with hive-members, nevertheless, since humans also forage and share information symbolically, insight into waggling can be, not implausibly, regarded as useful in speculating about the evolutionary roots of certain human behaviors.  In addition to such general comparisons, studies on animal homologues of quite specific human behaviors are often of particular interest.  The specifics of human mating systems and family structure have been analyzed comparatively with that of related species, chimps, baboons, and macaques for instance. It is in the light of an anthropic shift from apes and monkeys to humans that debates about the “naturalness” of human family arrangements are often assessed, though often irresolvably.

One of the distinctions of classical ethological research was that its practitioners took the behavior of a wide range of vertebrates very seriously on their own terms (see here for more on classical ethology).   Though it may have been the case that the work was motivated in part by the prospect of an anthropic shift to human behavioral situations, it is nonetheless clear in the work of Konrad Lorenz and Niko Tinbergen, the disciplinary founders of ethology, that they were naturalists of an evolutionary bent first and foremost.  The anthropic shift in ethology was armed with years’ worth of cross-species research on specific behavioral processes.  Since their work oftentimes focused on species at some genetic remove from humans, the application to our own predicament is fairly coarse-grained in terms of the behavioral category, e.g. aggressive drives, learning, communication and so on.   That it not to say that their recommendations on the amelioration of less delightful human behaviors, war, for example, is not quite specific, merely that a strength of ethology emerged from its examining a general behavior in the context of its evolution development in a broad range of species.


Konrad Lorenz’s examination of aggression in vertebrates illustrates the manner in which the anthropic shift occurs.  On the one hand aggression is an important drive found throughout the animal kingdom; however, Lorenz also wants to show that human aggression has some species-specific peculiarities that are, in his view, so strong, and so seemingly non-adaptive in our present circumstances, that they might be regarded as “evil”.  Lorenz’s account therefore is interesting when assessing a view of human nature that stresses continuity with the rest of nature and yet provides a judgment on how our contemporary situation reflects a human pathology that all but takes us outside the norms expressed in other more obedient species.  That being said, the pathology in human aggressive behavior has in Lorenz’s assessment only one other species against which it can be compared: the rat.  I will say a word of two about Lorenz’s theorizing on aggression, then, in the next post, examine in detail the comparison of rat and human behavior, before showing how this culminated in a set of suggestions from Lorenz and other ethologists on how human aggression can be treated (a final post).

Lorenz’s book on the topic of aggression, aptly named On Aggression, appeared in 1963 (in English translation in1966).[1]  True to the spirit of ethological studies it sought an understanding of aggression in an evolutionary context.  The struggle for existence entails significant violence.  Nature, in Lord Alfred Tennyson’s view of it, is famously red in tooth and claw.[2]  Certainly there is a lot of overt aggression seen in predatory behavior.  Though Lorenz remarks on aggression in predation, nevertheless his subject was not primarily inter-species conflicts; in fact, he reserved the formal use of the term aggression for intra-specific struggles directed against members of the same species.  This is incorporated into Lorenz’s definition of aggression which is “the fighting instinct in beast and man which is directed against members of the same species."[3]

What possible evolutionary advantage derives from intra-specific aggression, he asked?  To put it in Lorenz’s own terms, what are the “species-preserving function which, under natural – or rather pre-cultural – conditions, is fulfilled by fights within the species…?”  Among the advantages attributed to such fighting among individuals in a mono-specific population Lorenz proposed that it promotes an even distribution of the population, minimizes crowding, and promotes the value of having stronger fathers for the protection of the young of a species.  If these seem a little far-fetched or speculative it is consoling that such attempts to find the species-preserving functions of those behaviors that seem more easily explained in terms of the fitness advantages to individual organisms, are precisely the reason why this particular evolutionary approach has been so heavily criticized in recent years.  For instance, Richard Dawkins commenting in The Selfish Gene on this matter wrote: “The trouble with these books [the books of Lorenz and some other ethologists] is that their authors got it totally and utterly wrong because they misunderstood how evolution works”.[4]

Placing such criticism aside for now, it is nevertheless a chief insight of Lorenz’s that animal aggression should be regarded as part of the normal functional repertoire of behavior and thus can be understood as integral to the biological success of an animal.  Since aggression is part of an animal’s normal adaptive behavior it makes sense for aggression to serve as a contest – a struggle for existence – but not necessarily for aggressive encounters to result in the potentially severe injury of the victor and the death of the vanquished.  The observation that in most animals conflict rarely leads to death or even serious injury is one of the crucial insights to emerge from On Aggression.  It is against a background of the overwhelming rarity in most species other than humans of aggressive encounters leading to death that the peculiarity of humanities murderous proficiency needs to be assessed.  This is how Lorenz puts the problem: “When man had reached the stage of having weapons, clothing and social organization… and evil intra-specific selection must have set in.”[5]  How should we appraise this human behavior? And, after a cool scientific appraisal of the situation, how might we deal with it?

Although the implications of natural selection for humans occupied Darwin for some time before the publication of On the Origin of Species (1859), nevertheless humans are scarcely mention in that volume.  It took Darwin more than a decade before publishing his views on the anthropic shift which he eventually did in The descent of man, and selection in relation to sex (1871) and in The expression of the emotions in man and animals (1872).  One could call this the classic anthropic shift – the author waits a respectful period of time before pronouncing on human affairs.  Lorenz’s On Aggression, however, is the work of a mature scientist who had spent much of his early publishing career writing technical papers on the specific behavior of specific organisms and so he gets down to the business of pronouncing quickly.  That being said, despite the innumerable references to human behavior and his discussion of the implications of observations on other species for humans scattered throughout the text, Lorenz reserves the final chapters of On Aggression for his assessment of human affairs. This version of writing the anthropic shift – the summative shift – is the more typical one in the post-Darwinian age when the scientist has lost her bashfulness in opining on human nature.

Konrad Lorenz in conveying what a general ethological account of aggressive behavior means for understanding and dealing with human aggression presents his case in two especially notable ways.  In his chapter Ecce Homo! He draws conclusions about human social organization from the perspective of an “unbiased observer on another planet”.  Secondly, from the perspective of this “extramudane observer” he discusses the animal model most appropriate for reflecting on human aggression.  In this case the “lab rat” is, in fact, the lab rat, though in some examples are drawn from the behavior of the field rat.  This is the species where he sees an analogue for internecine battles resulting in the death of strangers.  The implications of an anthropic shift from rat to man is a topic I’ll take up in the next post.

[Note: I was given a copy of On Aggression by my mother as a requested Christmas gift when I was 19.  It has taken my 30 years to write about it.  At this rate I'll have a piece of writing on Infinite jest in 2042].
[1] Das sogenannte Böse zur Naturgeschichte der Aggression, Original edition : Verlag Dr. G Borotha-Schoeler, 1963
[2] Canto 54 which was published before Darwin 1859 though the term is often used as a shorthand for the evolutionary process.
[3] On Aggression, p3.
[4] Dawkins, Richard (1976). The Selfish Gene. New York City: Oxford University Press.
[5] On Aggression, p42
Posted by DublinSoil at 1:13 PM